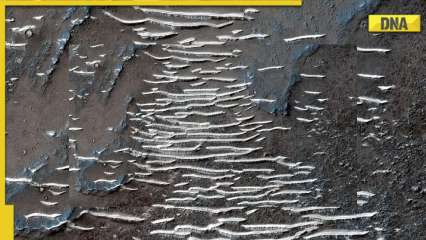 Mysterious ‘ice ladders’ seen on Mars: Does this confirm the presence of water on the red planet?

Scientists from the University of Arizona conducted the study. They mentioned seeing these ice ladders in Solis Planum. It is located near Noctis Labryinthus, which is in the southern hemisphere of Mars. Solis Planum, Mars’ largest basin, is located southeast of Valles Marineris.

ALSO READ  Can crypto make the world a better place?

TAR has sparked the interest of many scientists over the years. This image was discovered by NASA’s Mars Reconnaissance Orbiter. A clear view of these ice ladders was revealed using the HiRISE camera installed in the orbiter. However, how TAR is formed is not known.

When scientists at the University of Arizona examined these images closely, they found that they depicted ancient figures. Which can be seen all over the planet Mars. They continue to build and deteriorate, but they leave a mark. Like a channel network. Scientists believe that in ancient times these figures were formed by the flow of water or lava.

The icy stairs on these plains of Mars may be old windblown dust https://t.co/9I6M9QVhCK pic.twitter.com/iEc2elH8g8— SPACE.com (@SPACEdotcom) September 19, 2022

Scientists continue to investigate this 2015 photo. To confirm the presence of water on Mars. Water is necessary for the formation of life. There is some dispute as to whether water ever flowed on Mars or whether a microbe is present in the atmosphere. Because even a small amount of moisture and less water are beneficial for micro life. Just a few days ago, NASA’s Perseverance rover received word that organic objects had been discovered among the rocks. The information extracted from those stones is studied.

ALSO READ  We are shockingly unprepared for a world-ending asteroid

The Mario movie trailer is as cursed as we’d hoped