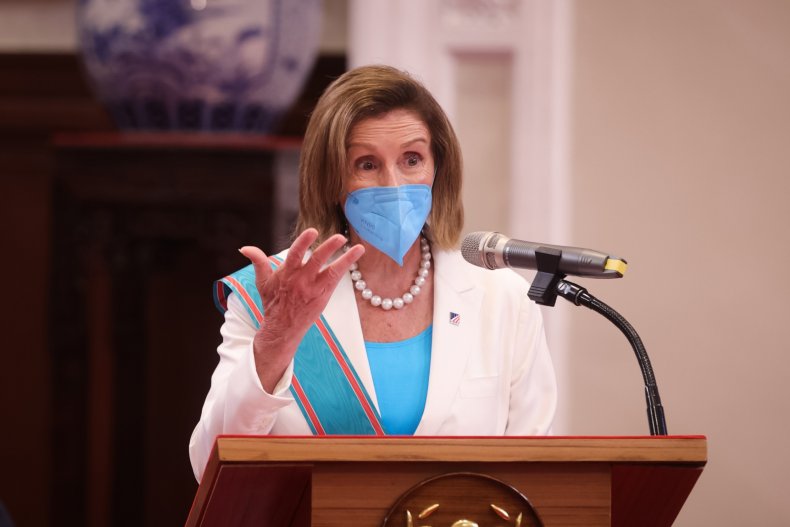 House Speaker Nancy Pelosi has downplayed the controversy surrounding her visit to Taiwan after the Chinese government reacted to her trip with outrage and military exercises.

Pelosi, a Democrat, said at a news conference that China had “caused a fuss” over being Speaker of the House and the country’s government reacting differently when a group of US lawmakers visited Taiwan in April.

She becomes the first serving speaker to visit the island since Newt Gingrich in 1997, saying the US is “committed” to the security of Taiwan, which China claims is part of its territory.

“I just hope it’s very clear that – although China has prevented Taiwan from participating and going to certain gatherings – that they understand that they will not stand in the way of people going to Taiwan.” come as a token of friendship and support, as well as a source of learning,” Pelosi said at a joint press conference with Taiwanese President Tsai Ing-Wen.

“I think they made a big fuss because I’m a speaker — I don’t know if that’s the reason or an excuse. Because they didn’t say anything when the men came,” Pelosi said.

ALSO READ  Why Gilded Age tycoon Jay Gould was one of the most hated men in America?

At the time, China denounced the visit, but the country’s government reacted more strongly to Pelosi’s visit to Taiwan, which it considers a provocation, and planned military maneuvers in response.

Chinese officials had repeatedly condemned the idea that Pelosi would visit the island, with Foreign Ministry spokesman Zhao Lijian saying in June: “The US should not arrange for Chairman Pelosi to visit the Taiwan region and should limit official interactions with stop Taiwan.

“If the US insists on doing otherwise, China will take strong and resolute measures to safeguard its sovereignty and territorial integrity. The US must take full responsibility for any resulting consequences.”

Like most countries, the US does not formally recognize Taiwan as an independent country. However, successive US administrations have provided significant support to the island, including the supply of weapons.

At Wednesday’s press conference, Pelosi said the US is “committed to Taiwan’s security” and questioned Chinese President Xi Jinping’s motivations and China’s response to her trip.

“Whether there are any uncertainties from the president of China regarding his own political situation, I don’t know,” Pelosi said.

Pelosi arrived Tuesday evening and addressed the island’s parliament on Wednesday before holding a joint press conference with Tsai.

“Our delegation came to Taiwan to make it unequivocally clear that we will not abandon Taiwan and we are proud of our lasting friendship,” she said on Wednesday.