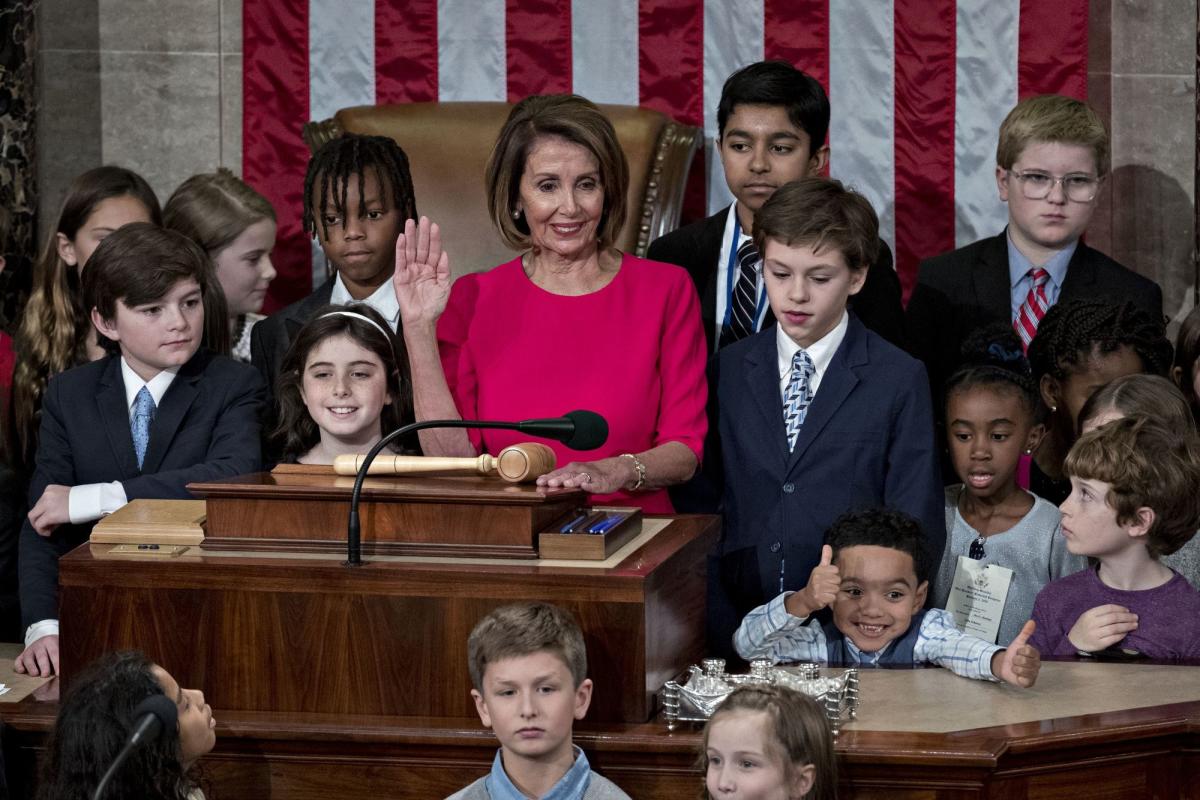 (Bloomberg) — In 2019, Nancy Pelosi left a particularly controversial meeting at the White House with President Donald Trump about the lengthy government shutdown and gave a succinct description of how the negotiations went.

“I’m a mother of five, grandmother of nine. I know a tantrum when I see one,” Pelosi said of the president, describing how he stormed out of the meeting.

Pelosi, 82, has never shied away from topics like parenting, even as she climbed a notoriously male-dominated power structure in Congress. And so on Thursday, when Pelosi announced she would not run for Democratic leader again, she wore suffragist white and highlighted the very first item on her resume.

“I never thought I’d go from housewife to house speaker one day,” she said to a standing ovation on the house floor.

Pelosi paved the way for a generation of female legislators, many of whom now hold positions of power. When she entered the House in 1987, there were 12 Democratic women. “Now there are 90 and we want more,” she said on Thursday.

Representative Annie Kuster, a Democrat from New Hampshire, said Pelosi has changed the dynamic around being a working mom. When she was a young lawyer, Kuster said she had to hide the fact that she had children. That made Pelosi’s oft-repeated motto “For the Children” powerful.

Pelosi’s leadership has not been without friction, both within her own party and with other female lawmakers. Conflicts between her and the original “Squad,” a group of congresswomen elected in 2018, including Representative Alexandria Ocasio-Cortez, regularly made headlines. Others recognized that there can be tense moments.

ALSO READ  UN looks at video of captured Russian soldiers who appear to have been killed up close, NYT reports

“I’ve been on Nancy Pelosi’s good side and the bad side and it’s much nicer to be on the good side,” said Representative Debbie Dingell, a Michigan Democrat.

In the end, Walsh notes, Pelosi managed to tie together the disparate wings of the caucus on many important voices.

Pelosi used her gender as an aid, often commenting that she had given birth to five children in six years as a reminder of the full extent of her abilities.

“We’ve seen her use toddler management skills from time to time,” said Pennsylvania Democratic Representative Mary Gay Scanlon, a mother of three. “You don’t let anyone get away with something, because then they do it again.”

Before Pelosi first took the presidency in 2007, women had served as Supreme Court justices and in top cabinet positions, but none had commanded their party.

In an interview with Bloomberg News just days before the 2006 election — where Democrats won power in the House and cleared her way to the speakership — she said her ascension would show that women can “breathe that rarefied atmosphere” on the highest peaks of power. .

Her rise helped other women move up the ranks in politics, including Hillary Clinton, whose nomination for Democratic president in 2016 made her the first woman to lead the ticket for a major party, and Kamala Harris, the first female vice president of the country.

The daughter of Thomas D’Alesandro, a former Baltimore mayor and congressman, Pelosi moved to San Francisco after college and her marriage to Paul Pelosi, an investment banker. She volunteered for her party, garnered early attention as a prolific fundraiser, and eventually became chair of the California Democratic Party.

ALSO READ  It's time we burn down the UN climate conference

She didn’t run for a house seat until she was 47 and the youngest of her five children in high school.

In 2001, she won the Democratic whip race, the No. 2 job. When Dick Gephardt stepped down in 2002, Pelosi quickly blocked votes to replace him as minority leader.

She has worked to put her own spin on some of the house’s traditions, often to the frustration of her male colleagues.

Just days after she first took office as speaker, she banned smoking in the ornate Speaker’s lobby just off the House floor, ending a privilege cherished by then-Republican leader John Boehner and others. In 2011, she created a women’s bathroom just above the floor, a highly anticipated addition that was applauded by her female colleagues and staff.

Most of the time, though, she has shown she can be a tough leader in the House, sometimes threatening the Democrats who challenged her with the loss of top committee assignments or forcing them to spend late-night negotiating sessions in her office to battle loud voices.

In one of her first appearances as a speaker, she created six-year term limits for panel chairs—to the surprise of a cluster of senior chairmen dubbed “Old Bulls” who thought they could match her clout.

Republicans found a speaker they dismissed as a “liberal from San Francisco” who could rule with an iron fist, leaving them little chance to change bills. It also strongly opposed the policies of former Presidents George W. Bush and Trump.

Democratic unity against Bush’s proposal to create private Social Security bills helped force Bush to eventually drop the idea and set the stage for the Democrats to take the House and Senate in 2007. provide a story on the Democratic House takeover in 2018.

Her clashes with Trump were particularly acute. She called his 35-day government shutdown in 2018 and 2019 a “hostage-taking” of officials and refused to let him use the House Chamber to deliver his State of the Union address while it was in progress. A year later, when he gave his next speech, she tore up her copy of it as TV viewers watched, later calling it “such a dirty speech.”

She advised Obama not to give up his sweeping health care in favor of smaller initiatives that would be easier to implement, calling the pared-down proposal “childcare.” She successfully rallied Obama and the Democrats behind a broader bill that was approved just two months later.

Pelosi’s tenure coincided with a broader understanding of fashion as a political tool. Her pantsuits — ranging in shades from royal purple at her first speaker’s swearing-in to suffragist white at Trump’s 2020 State of the Union address — regularly made headlines.

No stranger to being the only woman in a room, Pelosi showed women that they had to stand out in a sea of ​​dark suit-clad men and, more importantly, exude power, not despite being a woman, but because they were women. to be.

Representative Madeleine Dean, a Democrat from Pennsylvania, brought her granddaughter to the House floor as she was sworn in so she could see a woman leading the room.

“We shouldn’t say ‘Can a woman do it?’ not anymore,” Dean said. “Talk about glass ceilings, she breaks them every time.”