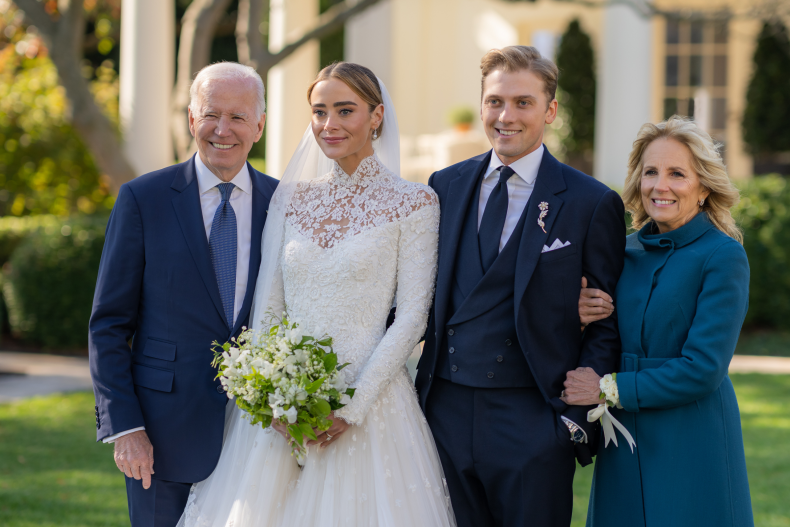 The president’s granddaughter, Naomi Biden, married her new husband Peter Neal on Saturday on the South Lawn of the White House against a backdrop of blue skies and classic decorations.

Reportedly paid for by the Biden family, details leading up to the wedding were closely guarded and a solicited press blackout from the couple meant the world waited for a photo and White House statement to be released.

In the statement, President Joe Biden and First Lady Dr. Jill Biden: “It’s been a joy to watch Naomi grow, discover who she is and build such an incredible life for herself,” before adding, “Now, we’re filled with pride to see that she has chosen Peter as her husband and we are honored to welcome him into our family. We wish them days full of laughter and a love that grows deeper with each passing year.”

When photos of the new bride and groom began to circulate, editor of Brides Gabriella Rello told Duffy News week what she thought of the occasion.

The first photos to appear publicly were of the South Lawn venue setup before the event, followed Saturday afternoon by helicopter footage of the ceremony.

“The floral decor is both trendy and timeless,” says Duffy. “The green and white color combination is incredibly classic, but has also become very popular with brides and grooms in recent years. It’s a beautiful combination that will never go out of style and exactly what I would expect for a White House wedding.”

Leading up to the big day, there was a lot of speculation about what Naomi Biden would wear, with predictions coming from designers from Reem Acra to Valentino.

The 29-year-old was pictured in a long-sleeved fit-and-flare dress designed by Ralph Lauren. The dress had a high neckline, detailed with white lace at the front. With her hair tied back neatly, a long veil added the finishing touch to the bride’s look.

“Naomi’s Ralph Lauren dress was absolutely stunning and the perfect choice for an American royal wedding – we had quietly guessed that Ralph Lauren was the designer for the big day, but we couldn’t have foreseen how spectacular the design would be,” said Duffy .

“She’s incredibly stylish in everyday life, so I have no doubt she chose something chic, understated and timeless for her big day,” she added.

The groom also wore Ralph Lauren, as the couple was joined by the maid of honor Naomi’s sister Finnegan and the groom’s brother Robert, who was best man.

Celebrity wedding planner Bryan Rafanelli, who was at the forefront of organizing the event, also shared some photos from the big day on Instagram.

The president was pictured in a tight suit as he escorted the groom’s two grandmothers down the aisle, before returning to accompany First Lady Jill Biden to her seat wearing a flowing green dress and long coat perfect for the day of 40 degrees.

Other photos included the moment the happy couple made their marriage official at the altar, a shot from the balcony of the White House, and a shot of the bride at the White House holding a bouquet of whites and greens.

The bride reportedly walked down the aisle accompanied by her father Hunter Biden. The song Bittersweet Symphony played by the Verve as the couple’s 250 guests gathered on the South Lawn of the White House for the first-ever wedding at that venue.

“The White House has said several times that the couple really wanted this to be a personal, intimate event and I think the decision to have their ceremony on the smaller side makes absolute sense,” Duffy said.

However, the reported number of guests ranks higher than the average guest list as reported by The Knot 2021 Real Weddings Study. The study revealed their findings with responses from more than 15,000 couples getting married in 2021, finding that the number of wedding guests in the US averaged 110 by the end of 2021, while the average number of guests for 2022 was expected to be around 129.

“I expect a greater number of guests to join the couple at the evening reception,” said Duffy.

Following the ceremony, the President and First Lady hosted a wedding luncheon for guests in the White House State Dining Room and a reception with dessert and dancing continued into the evening.