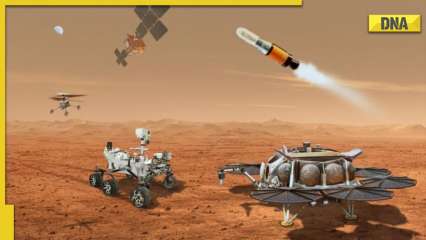 According to NASA, two more small helicopters will be sent to Mars to help return Mars soil and rock samples to Earth. NASA’s mission plan states that the Perseverance rover will serve a dual purpose by delivering the cache to the rocket that will take it off the red planet in ten years’ time.

11 samples have already been collected by Perseverance and more rock drilling is planned. Meenakshi Wadhwa, chief scientist for the retrieval mission at Arizona State University, claimed that the most recent sample, a sedimentary rock, has the best chance of containing potential evidence of ancient life on Mars.

“There’s already a diversity of materials in the bag, so to speak, and very excited about the potential to bring it back,” she said. In the event that Perseverance fails, the two helicopters to be built and deployed later this decade will carry the monsters on the missile.

READ | Can having sex put you at risk of getting Monkeypox? This is what the WHO says

The helicopters will be based on NASA’s Ingenuity, which has been successful and flown 29 times since it and Perseverance landed on Mars early last year. The helicopter weighs only 4 pounds (1.8 kilograms). The updated models would come with wheels and grab attachments.

Perseverance’s excellent performance on Mars, according to NASA officials, convinced them to abandon their original intent to launch a second fetch rover. The alternate course of action is simpler, according to Jeff Gramling, head of NASA’s Mars sample return program. Each helicopter will lift one sample tube at a time, which will make several trips back and forth. “We’re confident we can count on Perseverance to bring back the samples and we’ve added the helicopters as a backup,” Gramling said.

NASA and the European Space Agency are working together on the retrieval mission. If all goes according to plan, up to 30 samples could be launched from Mars in 2031 and land on Earth in 2033. Any material that may contain evidence of microbial life that could have been on Mars billions of years ago when water passed through the planet must be subjected to laboratory testing.

The Bharat Express News - August 18, 2022 0
A child in Nebraska is believed to have died from a rare case of brain-eating amoebae, health officials said Wednesday.If confirmed, it will be...