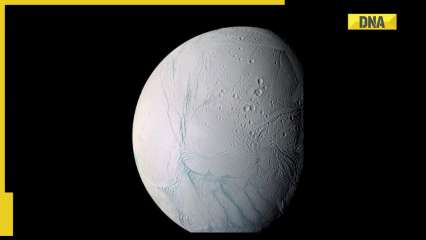 The Cassini spacecraft caught a glimpse of Saturn’s icy moon Enceladus, with a subsurface ocean hidden beneath its frozen surface. The small moon’s cracked surface may look like rivers carved into it, but scientists think they’re really hot spots in the crust where water ice and gases shoot up from the ocean floor and fuel Saturn’s E ring. Possible hydrothermal vents leading to the ocean floor can be found at the bottom of some of these cracks.

Saturn’s moon Enceladus is the sixth largest in size (19th largest in the solar system). With its surface covered in pure ice, Enceladus is one of the most reflective objects in the solar system. As a result, its surface is much cooler than a light-absorbing substance at noon, reaching only -198 °C. Despite its small size, Enceladus contains a broad spectrum of surface features, ranging from ancient areas with many craters to new, tectonic areas. deformed topography.

The tiny moon Enceladus travels an average of 148,000 miles (238,000 kilometers) from Saturn in an elliptical orbit. Because of this, Enceladus always has the same side facing Saturn, resulting in an average temperature of -330 Fo (-201 Co). The ice crust typically ranges in thickness from 20 to 25 kilometers (12 to 16 mi).

An enhanced color version of Cassini’s image of Enceladus’ white surface. Pale blue fractures rip through the moon’s surface in all directions, and there are deep craters on the surface. The planet is partially obscured by the moon’s shadow and the dark region to its right.

ALSO READ  Can aging be reversed? The 45-year-old CEO spends Rs 16 crore every year to look 18

The Cassini spacecraft first captured the moon’s distinctive and intricate south polar region in 2005. The spacecraft’s journey has increased our knowledge of the moon, leading scientists to conclude that Enceladus is an ideal place to search for extraterrestrial life due to its chemistry. , huge seas and internal heat.