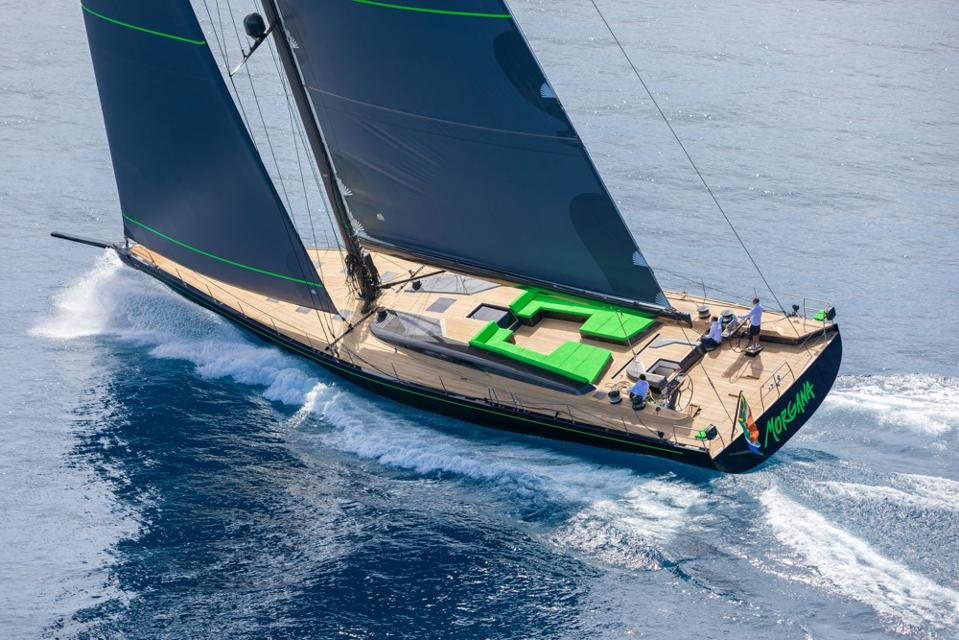 The fact that this new 100ft custom sloop just debuted would be remarkable just because it’s so sexy. But I haven’t been surprised since Morgana presents an exterior and interior design of Nauta Design. However, as this yacht also features serious naval architecture by Reichel / Pugh, and it’s just sailed 7,000 miles from the Southern Wind shipyard where she was built in South Africa, to La Spezia, Italy on her maiden voyage, it’s obvious that this all-new 100ft boat will be much more than just a ‘sexy’ yacht in Mediterranean this summer. Looks like she’ll be a comfortable bluewater rockship as well.

“Morgana completed his delivery trip from the Southern Wind shipyard in South Africa with flying colors, ”said Mario Pedol, President of Nauta Design. “The demanding owner is a friend of mine and it is the culmination of an idea that started in 2017 when he contacted us to design his new dream yacht.

Morgana’s exterior profile features the clean styling for which Nauta Design is known. “Elegance and balance are the cornerstones of Nauta Design,” says Massimo Gino, co-founder and partner of Nauta. “The owner has a highly developed aesthetic sense and wanted a fast bluewater cruiser that could also compete in superyacht regattas with exterior lines that exude rhythm and performance, so we developed a low, highly streamlined coach roof that is nevertheless proportionate to the height of the freeboard. On a light boat like Morgana which has a shallower bedplate than comparable yachts, that meant we were playing with the millimeters to get the proper height and proportions.

Jim Pugh of Reichel / Pugh adds: “It is always special to design a custom yacht that is meant to exceed the client’s vision. The owner is a passionate and competitive sailor who does numerous blue water cruises and a few superyacht regattas. He wanted the ultimate in comfort and speed under sail.

“We continue to advance the science of yacht design through work on computational fluid dynamics and use our experience to improve cruising comfort. At the same time, the boat must be very fast and handicap well according to the Superyacht scoring rule.

But whatever the genre of yacht, we want our designs to be timeless. This is our goal with our yachts such as Visione, Nilaya, Hetairos which each won the St Barth Bucket overall. And we expect the Morgan to turn heads with her beauty and speed, too.

Meanwhile, Nauta Design took a similar approach to create the yacht’s fresh interior styling. “It took a while to finalize the interior concept and we were invited to the owner’s house to better understand his tastes and discuss the different options,” says Pedol. “The owner is very pleased with the result, which has just the right combination of warm and welcoming ambience and touches of contemporary design.

“In the case of Morgana in particular, the coordination of the project was excellent,” concludes Pedol. “Southern Wind’s technical department, led by Marco Alberti, was always well ahead of the build, which is the best way to control weight and avoid unpleasant surprises. Carlo Torre of Monaco Yacht Temptation also contributed his vast experience in representing the owner during the entire construction process.

Children’s bedtime matters as much as their sleep