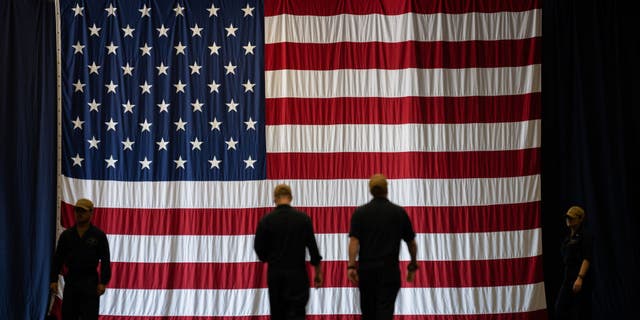 Faced with a growing threat from China, the navy envisions drone ships electronically monitoring enemy forces across the vast Pacific Ocean, increasing the range of firepower and keeping sailors away.

The navy is accelerating the development of those robotic ships as an affordable way to keep up with China’s growing fleet while promising not to repeat the expensive shipbuilding blunders of recent years.

The four largest drone ships will be deployed together this summer during a multi-country naval exercise in the Pacific Ocean.

Other smaller waterborne drones are already being deployed by the Navy’s 5th Fleet in Middle Eastern waters.

The goal in the coming years is to see how the radar and sensors of these research vessels can be combined with artificial intelligence and integrated with traditional cruisers, destroyers, submarines and aircraft carriers, to create a networked fleet that is resilient as it travels over larger areas. distances and harder for enemies to destroy, the Navy says.

“It’s about moving the technology forward and having faith in the possibilities. Everything takes time,” says Cmdr. Jeremiah Daley, commander of Unmanned Surface Vessel Division One in California.

US Navy sailors walk near an American flag on the USS Bataan on Memorial Day on May 30, 2022 in New York City. The Navy wants to speed up the process of creating electronic drone ships.
(Alexi Rosenfeld/Getty Images))

The Navy believes the technology can help with the three keys to military success — weapon range, scouting, and command and control — at a lower cost and less risk to personnel, said James Holmes, a professor at the Naval War College in Newport, Rhode Island. .

But all those benefits need to be proven, along with long-term durability in a harsh saltwater environment, he said.

“We’re kind of in Jerry Maguire’s ‘show me the money’ territory with the technology. It will undoubtedly be useful, but whether it will be a game-changer is much less clear,” said Holmes, who does not speak for the Navy.

Before moving on, the Navy must first win over a skeptical congress after a series of shipbuilding debacles.

The fast coastal battleships have had propulsion problems, leading to early retirement. The “Advanced Gun System” on its stealth destroyer was a failure due to expensive ammunition. And the newest aircraft carrier had problems with elevators and a new system for launching planes.

Critics said the Navy rushed to cram too much new technology onto those ships, leading to failures and rising costs.

The Navy’s unmanned task force is taking a new approach, using a military equivalent of a venture capital model to accelerate new ideas, and moving forward only after the technologies are proven, said Michael Stewart, the task force’s director.

These include the Sea Hunter and Sea Hawk, diesel-powered vessels equipped with outriggers for stability in rough seas. The other two are Ranger and Nomad, which are based on oil platform replenishment ships. They have large flat decks from which a missile was successfully fired last year.

While those larger ships are being tested in the Pacific, the Navy is already seeing promising results with smaller, commercially available ships under review by Task Force 59, which is part of the 5th Fleet in Bahrain, Cmdr said. Timothy Hawkins, spokesman for the 5th Fleet.

One of the ships that received attention is the Saildrone, a sailing ship with solar-powered systems. Equipped with radar and cameras, Saildrones are said to be able to operate autonomously for months without maintenance or supplies.

Based on the success of the multinational exercises last winter, the 5th Fleet said the US Navy and international partners plan to deploy 100 crewless ships by next summer.

All told, Admiral Mike Gilday, chief of naval operations, sees a mix of 150 large unmanned surface ships and submarine ships for 2045. That’s on top of more than 350 conventional force ships.

The Navy’s spending proposal for the new fiscal year includes $433 million for unmanned surface vessels and $284 million for underwater vessels.

MARINE LUUTENTANT GETS 3 YEARS IN JAPANESE PRISON, FAMILY ASKS FOR OUR INTERVENTION

Those ships combined with artificial intelligence have the potential to make the Navy’s fleet much more effective, said Gilday, the Navy’s top officer. But the Navy does research and development “in an evolutionary, deliberate, informed way,” he said.

The biggest advantage of robotic ships is that they can be built at a fraction of the cost of conventional warships, as the navy struggles to keep up with China and Russia, said Loren Thompson, a defense analyst at the Lexington Institute. The US is already lagging behind China in number of ships, and the gap is widening every year.

But Congress is not rushing to fund new programs, said Bryan Clark, a defense analyst at the Hudson Institute. “Congress wants the Navy to have a good plan — and then pursue it aggressively,” Clark said.

On Capitol Hill, Luria said there may be a place for ships without crews, perhaps in replacing missile capacity for ships the Navy wants to withdraw. But a lot of research and development is needed to convince Congress to invest heavily in ships without sailors.

sen. Mazie Hirono, chair of the Naval Subcommittee, said Gilday assured her that the Navy is “conscious not to go too fast with unproven technology.”

“The Navy needs to get this right the first time around and support rigorous testing with prototypes before committing to buying a fleet,” said Hirono, D-Hawaii.