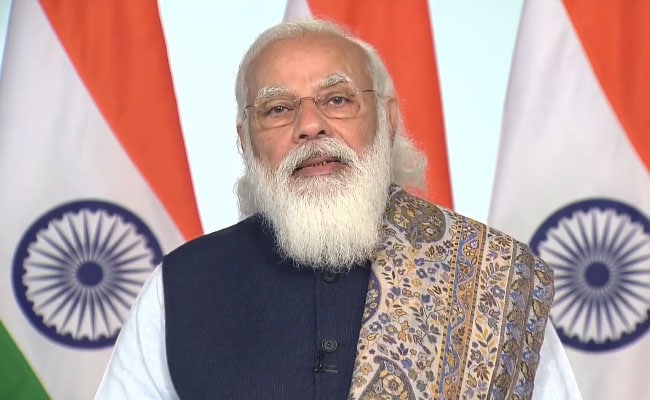 Warning of the dangers of climate change and natural disasters like the one in Uttarakhand recently, Prime Minister Narendra Modi on Tuesday called on IITs to develop disaster resilient infrastructure capable of withstanding their effects.

Addressing the 66th convocation of IIT-Kharagpur, the oldest of the Indian institutes of technology, he gave the students the mantra of “Self-3” – “self-awareness, self-confidence and altruism” – in order to become startups for making a difference in people’s lives.

He also spoke of the need to make safe, affordable and environmentally friendly energy accessible to populations through initiatives such as the International Solar Alliance.

“Climate change is a major challenge as natural disasters destroy infrastructure. India has drawn the world’s attention to the issue of disaster management,” he said.

“You can see what has happened recently in Uttarakhand. We need to focus on developing disaster resilient infrastructure that can withstand natural disasters,” he added.

The Prime Minister referred to the Global Coalition for Disaster Resilient Infrastructure (CDRI), which he announced at the United Nations Climate Action Summit in 2019.

ALSO READ  ‘A nation of prosecutors’: Why the French are suing the state to drive social change

Prime Minister Modi said: “Disaster management is a topic that the world regards as India. In major disasters, along with life, infrastructure is most affected. Realizing this, two years ago, India has taken the initiative to create a Coalition for Disaster Resilient Infrastructure at the United Nations. “

He praised the role played by IITs in developing technology to fight COVID-19 and said sacred institutes should now work quickly to find futuristic solutions to other health issues.

“You represent the aspirations of 130 million people in India,” he said, virtually addressing the summons.

“There is no room for rush in science and technology. You may not achieve complete success in the innovation you are working on. But this failure of yours will also be considered a success, because you will also learn something from it, ”he said.

Stressing the need for clean and affordable energy, the Prime Minister said that India had introduced the concept of the International Solar Alliance to the world.

He said the cost per unit of solar power is very low in India. However, it was still a big challenge to take her to the people.

He added that India needs technology that minimizes damage to the environment, is sustainable and user-friendly.

“Can you do anything to reach solar cookers in homes using ‘chulha’ (earthen ovens),” he asked.

He said that before the coronavirus hit, people used to only keep drugs in their homes.

“Things have changed. They now keep machines that measure blood pressure, machines that measure oxygen in the blood. A huge market has emerged for personal health care equipment. Technology must be developed to provide affordable and accurate personal health care equipment in India, ”he said of research and innovation in the field.

Welcoming the efforts of IIT Kharagpur to transform academic research related to industrial-level artificial intelligence, Internet of Things and modern building technology, the Prime Minister stressed the need for significant innovation to industry 4.0.

He said that IIT students can use the PM Research Fellow program and the Startup India mission for the incubation of ideas.

The Prime Minister spoke about the government liberalizing geospatial data regulations to allow private companies to conduct surveys and mapping without prior government approval and share data for various daily applications, logistics and transportation. road safety and electronic commerce.

He said that this decision will give a huge boost to digital India and is a step forward in realizing the “Aatmanirbhar Bharat” vision.

After Corona, India has become a major global player in science, technology, research and innovation, he said.