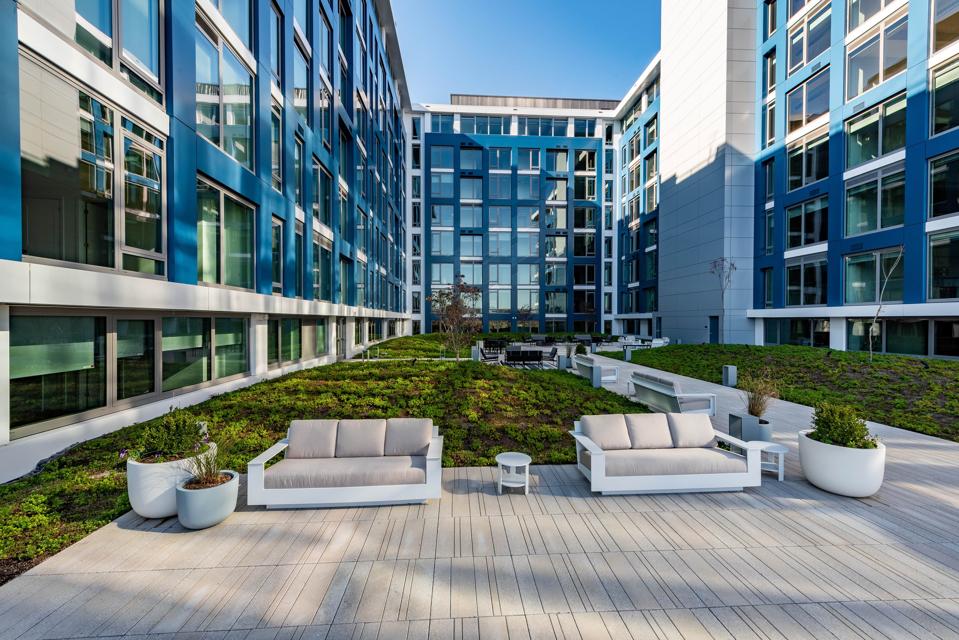 Buzzard Point is buzzing with activity. Located along the Anacostia River in the southwestern part of Washington, DC, Buzzard Point has undergone a complete makeover. Originally dubbed ‘Turkey Buzzard Point’, the neighborhood was once an industrial outpost and has made a comeback as a vibrant urban area, attracting millennials as an idyllic place to reside, work and play.

The talented efforts of many developers have established the latest gem in the waterfront crown that perfectly combines waterfront condos, retail stores, dining rooms and fine dining establishments, as well as plenty of outdoor activities nearby.

Just steps from Watermark is the soon-to-be-completed 20-mile, pedestrian-accessible Anacostia Riverwalk, where residents and visitors can run, walk, and cycle. In addition, there are several marinas nearby for boating. Other recent major developments include a 445,000 square foot football stadium, Audi field, where the DC United team will compete. DC United kicks off the MLS season, which kicks off Hernan Losada’s coaching era, on April 17 at home against New York City FC. A United spokesperson said the organization “intends to work with the mayor’s office on a proposal to safely welcome fans to Audi Field in 2021.”

The 154 rooms Cambria Hotel Washington DC Capitol Riverfront recently opened and is a short walk from the seafront. Its development was a joint venture between The Donohoe Companies and Koucar Management. The hotel’s full-service restaurant, Rowhouse, has a terrace. The hotel also has a 3,500 square foot rooftop terrace with a living room and fireplaces.

The Wharf, a shopper’s paradise, is just 1 mile away and offers unique boutiques, shops and restaurants. Stroll along the piers, rent a kayak to paddle past iconic DC attractions, or catch a concert at The Anthem. Ideally located on the Anacostia River, between Nationals Park and the Washington Navy Yard, The Yards offers award-winning restaurants, craft breweries and designer boutiques with river views.

The region is also emerging as a place where foodies can revel in a variety of culinary offerings, with new restaurants popping up everywhere, including Point, a future restaurant on the waterfront that specializes in the delectable flavors of open flame cooking. Others include fresh seafood at The salt line, modern Indian cuisine like RASAand an authentic Puerto Rican touch to La Famosa.

Developer Akridge’s The upcoming project, the Stacks, is aptly after the smokestacks at the nearby Buzzard Point Power Plant. Development, which is slated to begin in 2022, will include two city blocks and two million square feet. The Stacks will offer panoramic views of the confluence of the Anacostia and Potomac Rivers, the National Airport and Virginia. It will also include an urban park, landscaped squares, unique artistic programs and ephemeral exhibitions.

With so much to see and do, Buzzard Point offers a much needed makeover to the southwest quadrant of DC residents and visitors will surely reap the benefits of such a well-planned visionary project.

Travel to UK and US: Carriers push for airlift to resume on May 17, due to successful vaccination

The ‘most wanted list’ for boosting safety, supplemented by distracted driving, impaired driving and speeding