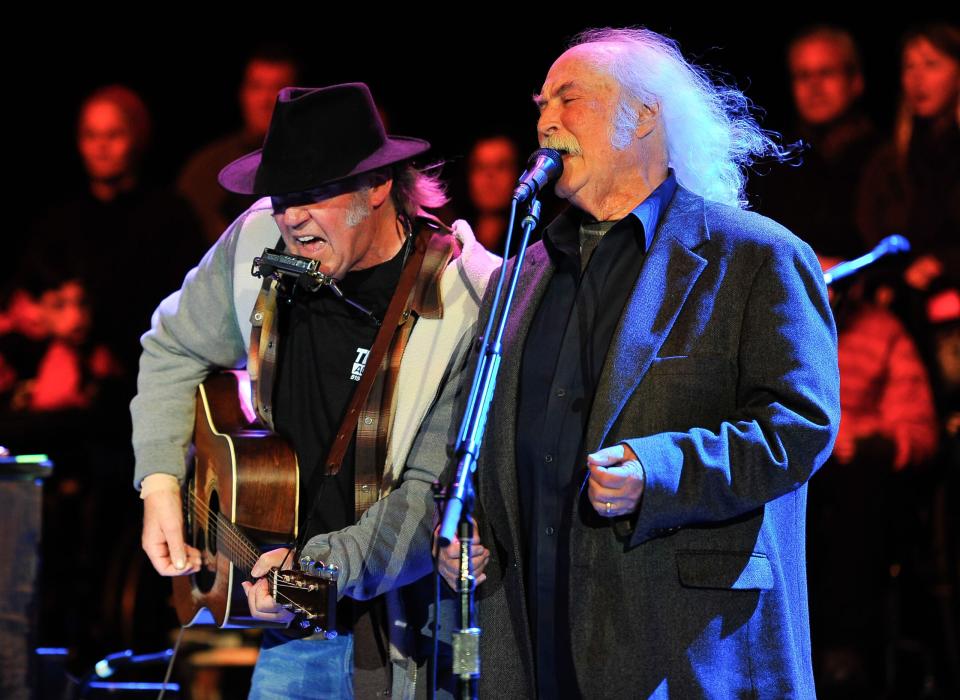 Neil Young has released a statement regarding the passing of his longtime Crosby, Stills, Nash & Young bandmate David Crosby, who passed away yesterday (Jan. 19) at age 81. Young and Crosby stopped talking in 2014 after Crosby made disparaging comments about Young’s wife Daryl Hannah, but his tribute focuses on the iconic music the pair have created over the course of more than 40 years together.

“David is gone, but his music lives on,” Young wrote on his Neil Young Archives website. “The soul of CSNY, David’s voice and energy were the core of our band. His great songs stood for what we believed in and it was always fun and exciting when we got to play together. ‘Almost Cut My Hair’ and ‘Deja Vu’, and so many other great songs he wrote, were great to jam to and [Stephen] Stills and I had a lot of fun as he went on and on. His singing with Graham [Nash] was unforgettable, their duo spot a highlight of so many of our shows.

“We had so many great times, especially in the early years,” he continued. “Crosby was a very supportive friend in my early life when we bit large chunks of our experience together. David was the catalyst of many things. My heart goes out to Jan and Django, his wife and son. Much love to you. Thank you David for your spirit and songs, love you man. I remember the best times!”

Drawn to the heady stew of the thriving Laurel Canyon neighborhood of Los Angeles in 1969, Young, Crosby, Stills and Nash released their first album as a quartet, Deja Vuin 1970. In various permutations, they would share harmonies, lovers, drugs and stages over the next several decades, but their best moments were undoubtedly captured on that album, with classics like “Carry On,” “Teach Your Children,” “Almost Cut My Hair” ‘, ‘Helpless’, the Joni Mitchell written ‘Woodstock’ and ‘Our House’.

The musicians occasionally played together in various incarnations until 2013, but never regrouped after Crosby called Hannah a “purely poisonous predator” in an interview the following year with the Idaho statesman (he apologized repeatedly over the years). By 2017, Young seemed to have softened the idea of ​​a reunion, tellingly Mojo that he thought CSNY had “every chance of getting back together.” I’m not against it. Many bad things have happened between us, and many things need to be settled. But that’s what brothers and families are all about. We’ll see what happens. I’m open. I don’t think I’m a big obstacle.”

The closest they’ve come to rapprochement came in early 2022, when Crosby, Nash and Stills removed their discographies from Spotify in solidarity with Young, who withdrew his catalog after the streaming service refused to take action. The Joe Rogan Experience‘s spread of COVID-19 and misinformation about vaccines.

“We support and agree with Neil that dangerous misinformation is being broadcast on Spotify’s Joe Rogan podcast,” the musicians said at the time. “While we always appreciate alternative points of view, knowingly spreading disinformation during this global pandemic has deadly consequences. Until real action is taken to show that caring for humanity should be balanced against commercialism, we don’t want our music – or the music we’ve made together – to be on the same platform.”

The post David Crosby, Legendary Musician of The Byrds and Crosby, Stills, Nash & Young, Dies at 81 appeared first on SPIN.