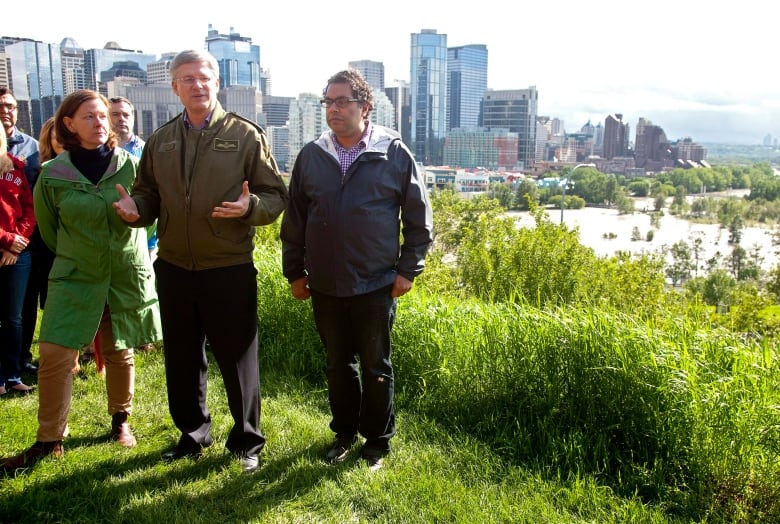 Calgary Mayor Naheed Nenshi’s genesis story is well known by now, an outsider with a geeky love of municipal politics who rose to power with the promise of politics in full sentences and who captured the attention of national and international audiences.

He was the first Muslim mayor of a big Canadian city, a kid from the city’s northeast with an academic pedigree, a very active Twitter account and a penchant for the colour purple.

On Tuesday, however, the geeky outsider-turned-insider announced he would not run again after three turbulent terms. That 11-year span included massive flooding, a sharp economic downturn, a pandemic, sometimes acrimonious fights over what Calgary is and could be, but also systemic changes to budgeting, growth and communities.

Nenshi said it was a decision he’s been struggling with for some time, and made the call to bow out only this past Thursday.

WATCH | Why Naheed Nenshi is not running again.

Calgary’s mayor since 2010 has decided not to run again, saying he plans to keep serving the city in some capacity but wants to make room for new voices and ideas. 2:10

So what is his legacy?

Calgary in a new light

Jack Lucas, a University of Calgary associate professor in the political science department, says Nenshi helped to change how others perceive the city.

“It was national news when he was elected in 2010 and really kind of made people across Canada wake up and understand that Calgary was a big, urban, diverse, rapidly growing place with all of the characteristic features of any large urban metropolis,” he said.

“And it was a more diverse and, I don’t know, urban place than people outside Calgary tended to picture. It has this sort of image that Nenshi maybe helped shake up a little bit.”

Nenshi was a business prof at Mount Royal University and a former McKinsey & Company consultant with a master’s degree from Harvard, after all.

But it’s not just all perception when it comes to Nenshi’s legacy.

Emerging from a group called Civic Camp that was pushing for a more urban vision for the city, Nenshi was elected on a mandate to curb sprawl and breathe more life into communities.

During his time in office, he managed to eliminate the so-called sprawl subsidy that forced the city to pay a hefty chunk for developers to build on the outer fringes of the city.

He also helped push through the bus rapid transit network and the route ahead plan for transit that helped fund the as-yet-unbuilt Green Line LRT. He oversaw the construction and opening of the new central library, and chaperoned the expansion of the East Village and Rivers District on downtown’s eastern edge.

Then there was the approval of food trucks and the addition of four big rec centres. The approval of secondary suites was moved out of the council chambers, where the hearings would sometimes logjam meetings for days.

WATCH | What Naheed Nenshi hopes his legacy will be.

Calgary’s mayor hopes to finish off a couple big projects, like securing the Green Line LRT, but is proud of what he’s accomplished in his time with city council. 2:47

Nenshi laughed when asked to narrow it down to just one accomplishment, but said he’s particularly proud of a less flashy achievement.

“What I’ve done that doesn’t get a lot of press is the work we’ve done to make city hall work better,” he said, adding that the work isn’t done.

Noel Keough, who co-founded Civic Camp, says Nenshi was able to push through some of the group’s vision, including more affordable housing, developer levies and more inclusive budgeting processes, but was also stymied by the nature of council politics.

“So I would say, you know, he’s attempted to do many of those things. He’s had some success. But it’s limited by the kind of overall conservative nature of Calgary,” said Keough.

Joe Ceci, the NDP’s municipal affairs critic and the former finance minister, served under two mayors when he was a Calgary councillor.

He says Nenshi seemed to have some growing pains through the first years as he wrestled with just how a council works, but once he found his footing, he pushed hard for the city.

“I always saw him as fair, you know, dragging, pushing, prepared when it came to meetings, he worked well with other mayors. Him and [Edmonton’s] Don Iveson were a pretty formidable duo of big city mayors to deal with,” said Ceci.

“He knew what he wanted in terms of the city’s needs and he put those forward in no uncertain terms.”

Nenshi, along with Iveson, wrangled more power for Edmonton and Calgary by signing charters with the province under the NDP government.

Ric McIver, the current minister of municipal affairs who ran against Nenshi for mayor in 2010, did not respond to a request for an interview.

For Ceci, Nenshi stands out for his talent at communication, particularly during crises like the 2013 floods, when citizens were begging him to get some rest as he tirelessly kept the city updated and tried to boost spirits.

Ceci also gives him credit for engaging more young people in civic politics, and for his efforts outside of brick-and-mortar priorities.

“He certainly focused on a lot of social infrastructure in the city. Things like reconciliation were important for him and he showed great sensitivity towards that and anti-racism work, support for the LGBTQ+ community, support for affordable housing development in the city,” he said.

Lucas says Nenshi remained focused on non-partisanship at the municipal level, but that the perception of him as a politician and partisan changed over the course of his time in office.

“I really wish we had great survey data from 2010 because my guess is that if you had asked people in 2010 where Nenshi stands ideologically, their responses would have been very mixed,” he said.

“Then in 2017, where we do have good high quality survey data on this, and again in 2018, you see that Calgarians think of Mayor Nenshi these days as being firmly left of centre, and I think that’s been a trajectory that Mayor Nenshi has consistently tried to resist.”

Lucas thinks a lot of that perception is due to opponents trying to define Nenshi for their own reasons.

“It becomes difficult to resist that claim, especially if you’re not comfortable resisting it by saying, ‘No, I’m not a left winger, I’m a right winger,'” he said.

On that front, Nenshi’s legacy is a mixed bag. There are the transit projects and the social infrastructure that Ceci notes, but there are also the budget cuts and zero-based budget reviews and red-tape reductions that many would associate with a more conservative politician.

Under Nenshi’s leadership, the city has transformed the way it doles out cash, and the overall budget has been slashed by hundreds of millions.

Of course, it hasn’t always been a smooth, or popular, ride.

As much as Nenshi is known as a great communicator, he’s also been known to put his foot firmly in his mouth.

He was caught on camera calling the CEO of Uber a “dick,” and has been widely criticized for acting like the smartest guy in the room. He was taken to court, accused of defamation by Calgary developer Cal Wenzel, and is currently facing another defamation suit by another Calgary businessman.

The Wenzel case was settled out of court.

Nenshi has never shied away from a war of words. He fought with the Calgary Flames ownership in the lead up to an arena deal, he fought developers, he even fought some councillors. He’s been criticized for overseeing an increasingly fractious council that’s grappling with big issues.

Nenshi’s time in office coincided with a hollowing out of the downtown core, brought on by a long-term decline in the price of oil that started in 2014. The city has struggled with a tax shortfall caused by the empty downtown towers, and recently voted to once again subsidize business taxes in order to reduce the impact of skyrocketing rates outside of the core.

Naheed Nenshi says he’s sorry for critical comments he made about the CEO of Uber in a widely circulated video recorded without his permission 2:49

The Flames got their arena with $225 million in funding from the municipality just as the city was announcing cuts to transit service, and Nenshi watched as his dream of hosting the Olympics was voted down by Calgarians in a plebiscite in 2019.

He will likely leave office before construction of the massive Green Line LRT line begins, due to delays brought on by a provincial government often at the receiving end of Nenshi’s verbal barbs.

Nenshi said this job has been the greatest honour of his life and he hopes to stay involved in the city’s story. Stepping down isn’t a decision based on term limits.

But, he said, the decision is about more than just him.

“It’s not just about me … there’s 1.3 million people here whose visions we have to listen to.”

So was he successful?

Lucas says he will leave it to others to judge Nenshi’s policy successes while reiterating the mayor’s accomplishments at changing perceptions of Calgary both within and outside of the city.

Keough feels the same, suggesting some of the young and progressive candidates running for council seats in October’s election are there because Nenshi showed it’s possible to run, and win, even if you don’t fit the Alberta conservative stereotype.

He wishes, however, that the mayor had done more to push the city away from its reliance on oil and gas and fought harder against ongoing suburban development on the city’s edges.

“No hesitation to say yes. I think early on he had some challenges in terms of understanding what the consensus building role of a mayor is about, and I think he definitely learned how to do that more often and better, as he got further into the work,” he said.

“The things that council was able to achieve, when they were working together, is pretty remarkable.”

Nenshi said he isn’t sure what’s next.

“I really have no idea. I’m going to do something that’s uncharacteristic for a big planner like me and open myself up to the universe.”

WATCH | What Naheed Nenshi plans to do next.

algary’s mayor, who is turning 50 after the next election, hopes to catch up on all the things he missed over the last decade as he sees what opportunities open up on his horizon. 0:45

He also isn’t saying whether he plans to endorse any mayoral candidates, but he does have some advice for the next person to take up the role.

“My advice is never forget that people have given you their dreams. It’s an incredible responsibility but its a responsibility you have to embody every minute of every day.”