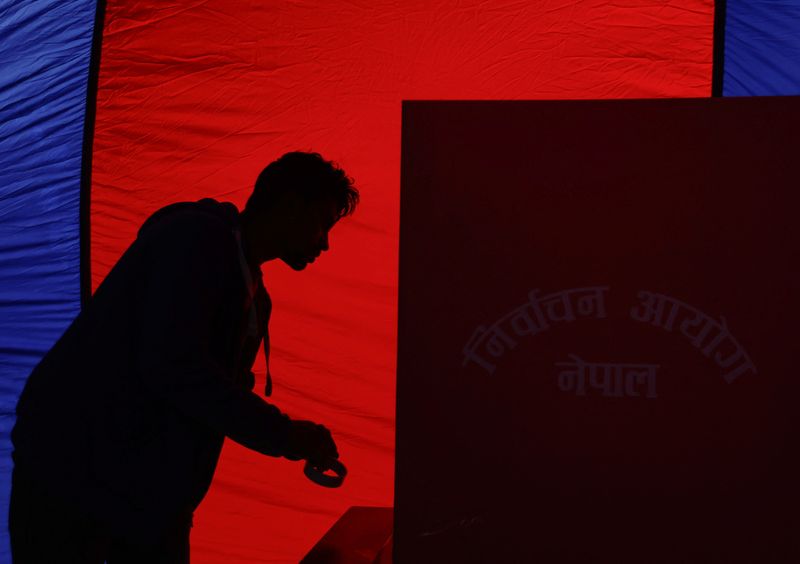 KATHMANDU (Reuters) – Millions of Nepalis went to the polls on Sunday to elect a new government to guide the Himalayan country through a time of economic peril.

Many women dressed in saris and men in jeans and baseball caps lined up to vote in the general election, pitting the centrist Nepalese Congress Party, led by Prime Minister Sher Bahadur Deuba, against Nepal’s Communist United Marxist Leninist Party.

Rising prices and poor job prospects were at the top of the agenda.

“I voted for economic development, job security, food, clothing, education and health services,” said Rajesh Kumar Subedi, 52, who was the first to vote at a polling station in Phaimlamchuli, a suburb of the capital Kathmandu.

After the polls closed, Chief Election Commissioner Dinesh Thapalia said preliminary estimates showed that 61% of the country’s 18 million eligible voters had voted, compared to 68% in the last election in 2017.

“It’s less than our expectations,” he said.

One person was killed in a clash during the vote, which was largely peaceful, Thapalia added.

Vote counting will begin late Sunday in many places, the election commission said. It may take up to two weeks for the final results to be announced.

There were no pre-election polls, although political analysts expect the ruling alliance of the Nepalese Congress and some former Maoist rebels to retain power.

Political stability has proved elusive for the poor country sandwiched between China and India, discouraging many investors. Nepal has had 10 governments since the abolition of a 239-year-old monarchy in 2008.

A new government will rise to the challenge of reviving the economy and curbing high prices at a time when it is feared that a global recession could threaten remittances, which account for about a quarter of gross domestic product (GDP), will decrease.

Tourism, which contributed 4% to GDP before the pandemic, has yet to fully recover. In the first 10 months of this year, about 450,000 tourists visited Nepal, less than half the number in all of 2019, before the COVID pandemic.

Foreign exchange reserves are shrinking and retail inflation hovers around a six-year high of about 8% in the Himalayan nation, where one in five people live on less than $2 a day.

“We need political stability for faster growth of the economy and a government that can guarantee security to investors,” said Prakash Thapa, 25, another voter in the Phaimlamchuli suburb.

Nepal’s 275-member parliament and the 550 members of seven provincial assemblies are elected through a mix of first-past-the-post and proportional representation.