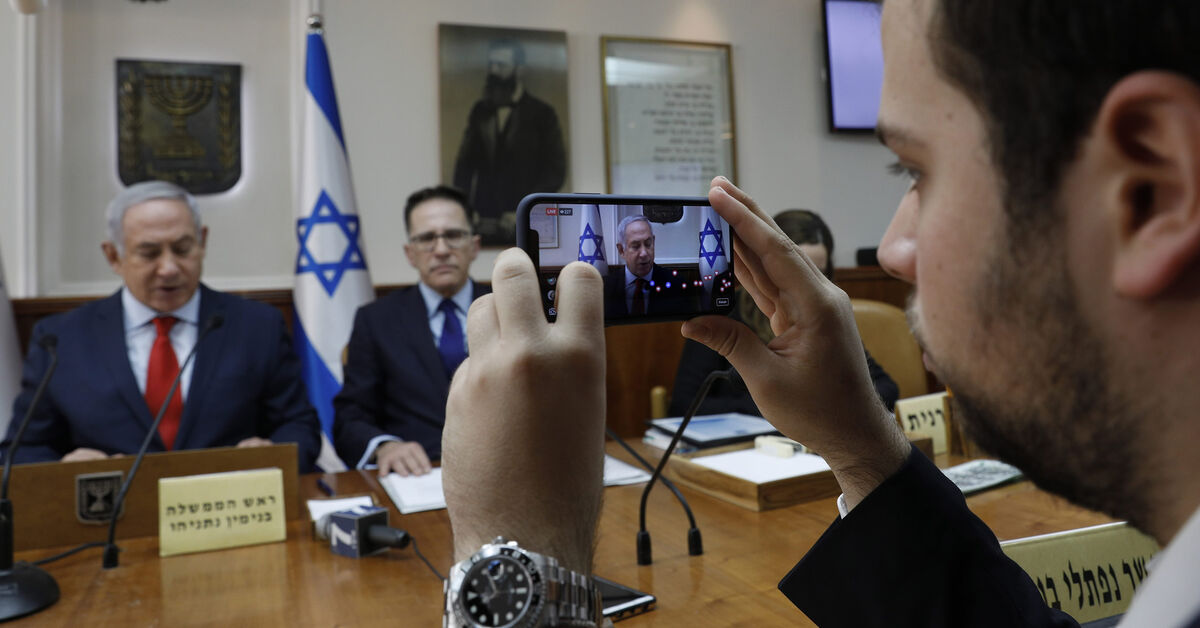 Opposition leader Benjamin Netanyahu announced on Sept. 8 that he had created new Arabic-language accounts on Twitter and Instagram, in addition to the popular TikTok and Facebook accounts in Arabic he created on the eve of the 2021 elections, targeting Israel’s Arab citizens. Netanyahu has thus become the only Israeli-Jewish politician to have Arabic-language accounts on all major social media sites — accounts that have become more vibrant by the day in the run-up to the November election.

Netanyahu’s Facebook page was not very active during the Bennett-Lapid administration with just 16 posts in an entire year, but since the Knesset disbanded this summer, the account has become more active with 29 posts in Arabic so far. It may seem like another politician seeking votes, but when it comes to Netanyahu, there is clearly a lot more to it.

Netanyahu is supposedly planning to revive his 2021 ‘Abu Yair’ campaign, with the Likud party putting up posters of their leader in Arabic in Arab towns and villages, handing out Arabic-language car stickers and even an Arabic-language jingle created. The Likud organized frequent meetings with Arab leaders and incessant visits by Netanyahu and other party elders to Arab towns and villages. At the time, many Israeli citizens wondered about this sudden intense courtship of Netanyahu, and whether Netanyahu just woke up one morning and decided to turn a new leaf on his relationship with the Arab public.

As a result of that campaign, the Likud received just over 20,000 votes in Arab congregations of all regions (Druze, Muslims and Christians). Yet Netanyahu’s real achievement was not in the number of Arab votes, but rather in his ability – from his point of view – to stun the Arab street, leaving Arab citizens with no reason to go to the polls. Suddenly, to them Netanyahu was less of the enemy he used to be.

Arab voter turnout in the last election was just 44.6%, an unprecedented low that led to the decline of Arab parties – the Arab Joint List and Ra’am – from 15 mandates in the 23rd Knesset to just 10 mandates in the outgoing Knesset. Apparently, these results played into the hands of Netanyahu and his right-wing side.

The 2021 ‘Abu Yair’ campaign contrasted sharply with the previous three campaigns. In those campaigns, Netanyahu took a combative and aggressive stance against the Arab public, including the 2019 Camera Act proposal to install cameras in Arab polling stations; a chatbot announcement on Facebook warned about the Arabs allegedly stealing the elections – “the Arabs want to destroy us all – women, children and men”; and the Nationality Law and other legislation against the Arab population.

All these actions and initiatives apparently left the Arab public feeling frustrated with inciting and delegitimizing them in the Likud party and seeking “revenge” on Netanyahu by voting. It hit Netanyahu like a boomerang, as the Arab voter percentage grew with each election, peaking at 64.8% in the 2020 election, only stopping him from getting the long-awaited 61st mandate he’d been striving for since the endless loop of elections that started in 2019.

These results explain why Netanyahu changed his strategy towards the Arab population in 2012. He began visiting Arab cities, drinking coffee with the Bedouin population in the Negev desert, and marketing the image of a new Netanyahu who no longer rebelled against them and delegitimized them. In place of the nemesis Netanyahu, the Likud began selling a “new” candidate called “Abu Yair”, who allegedly viewed the Arab public as part of the State of Israel. The unspoken strategy was to indirectly encourage them not to vote.

This could (again) be the real goal of creating Arabic-language social media accounts, continuing the success of the “Abu Yair” campaign and indirectly getting the Arab public to stay at home.

Discussing the creation of these Arabic-language accounts with Al-Monitor, Strategic Advisor Lior Horev said, “Netanyahu is not leaving any fronts. He is everywhere on the eve of an election, be it a local radio station or a local newspaper in a place forsaken by God; he does not disdain any microphone. We should note, however, that social media is not just for broadcasting; it can also be used as a tool to collect data and identify trends so that Netanyahu can identify topics discussed in the Arab public and hone his reporting accordingly.

As to whether Netanyahu will continue his strategy of stupefying the Arab street, Horev surprisingly noted: “Netanyahu recognizes that there is a mandate for one and a half mandates that he could gain from the Arab public, and so he will strive to close any gaps he has among Jewish voters with Arab voters.”