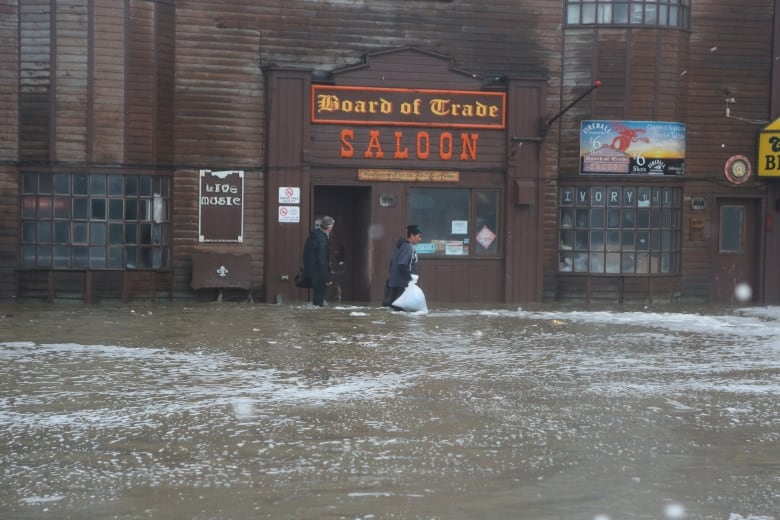 A powerful storm that moved north through the Bering Strait on Saturday caused widespread flooding in several coastal communities in western Alaska, shutting down power and causing residents to flee to higher elevations.

The force of the water knocked some houses off their foundations and a house in Nome floated in a river until it got stuck near a bridge.

The storm is the remnant of Typhoon Merbok, a storm that is also affecting weather patterns as far as California, where high winds and a rare late summer rain shower were expected.

In Alaska, there are no reports of injuries or deaths from the storm, said Jeremy Zidek, spokesman for the Alaska Department of Homeland Security and Emergency Management. Officials had warned communities that some places could experience the worst flooding in 50 years and that it could take up to 14 hours for the water to clear.

I have just verbally declared disaster for communities affected by the West Cost Storm. SEOC has not received any reports of injuries at this time. We will continue to monitor the storm and keep Alaskans informed as much as possible.

One of the hardest hit was Golovin, where most of the village’s 170 or so residents took shelter in the school or in three buildings on a hill. Winds in the area were gusts of more than 95 kilometers per hour and the water level was 3.35 meters above the normal high tide line and would rise another 61 centimeters before reaching the top on Saturday.

“Most of the lower part of the community is inundated with structures and buildings that are under water,” said Ed Plumb, a meteorologist with the National Weather Service in Fairbanks.

Clarabelle Lewis, the local tribal government’s facility manager, was among those who took refuge on the hill overlooking Golovin. She and others rode out of the storm at the tribal office after securing things in their home from the wind and helping their neighbors do the same.

“The wind howled, it was noisy,” she said.

Major flooding in Golovin this morning. The water is still expected to rise 1-2 feet this afternoon. Our thoughts are with the community. (photos courtesy of C. Lewis) #akwx pic.twitter.com/BO63uN8dGL

Lewis has never experienced such a storm in the 20 years she has lived in Golovin.

“We’ve had flooding a few times in the past, but it’s never been this severe,” she said. “We’ve never moved houses from their foundations.”

There were also reports of flooding in Hooper Bay, St. Michael’s, Unalakleet and Shaktoolik, where waves broke over the berm in front of the community, Plumb said.

He said the storm will move through the Bering Strait on Saturday and then into the Chukchi Sea.

“And then just west of Point Hope it’s going to kind of become a park and weaken,” he said of the Alaskan northwest coast community.

He said there would be high tides in the northern Bering Sea until Saturday evening, before declining to Sunday. Rising water levels further north, in the Chukchi Sea and Kotzebue Sound areas, are expected to continue through Sunday.