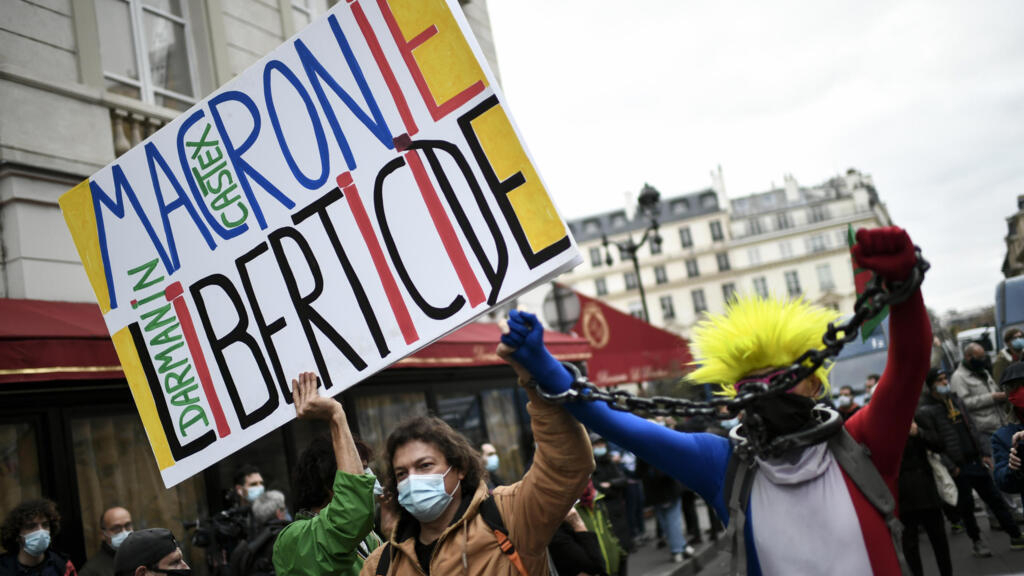 The French parliament on Friday voted to approve a controversial law that will ban the publication of images of police officers on duty and expand the use of surveillance drones and police powers. Groups of journalists, human rights activists and trade unions – including Reporters Without Borders and the French branch of Amnesty International – staged protests in Paris and other French cities on Saturday.

Article 24 of the new French security bill would criminalize the dissemination of images likely to “attack the physical or mental integrity” of the police. Those found guilty can be punished with one year in prison or a fine of up to € 45,000.

Critics of the bill say it threatens to make it harder for journalists and others to report on police brutality or other offenses, with groups of journalists, human rights activists and unions organizing events in French cities.

Faced with a backlash, Interior Minister Gerald Darmanin tried to allay public fears in comments to parliament on Friday. Journalists and members of the public can still “film and broadcast” images of police officers even “without blurring their faces,” he said. It was only when the images were shared with comments “intended to harm” or incite violence that they would fall against the new law.

Media organizations had criticized Darmanin for saying at a press conference on Wednesday that journalists covering protests or protests should notify authorities in advance to “avoid confusion” if police are forced to respond to the report. violence.

“The bill will in no way jeopardize the rights of journalists or ordinary citizens to inform the public,” Thourot told the French daily Le Figaro, adding that it “only prohibits any call for violence or reprisals against the police on social networks ”.

MPs are due to vote on the bill as a whole on Tuesday. He will then go to the Senate, the upper house of France.

Responding to claims that section 24 would have unintended consequences for press freedom, the government added an amendment ahead of Friday’s vote stating that the clause “shall not interfere with the right to inform the public”. The offense described in the text “will only target the dissemination of images clearly aimed at harming the physical or psychological integrity of a police officer or a soldier”, indicates the amendment.

But the passage of the article raised eyebrows after a summer of mass public protests against police brutality and accusations of systemic racism.

Activists have alleged that police brutality was responsible for the murder of Adama Traoré, a Frenchman of Malian origin who died after his arrest in the Paris suburbs in 2016. An autopsy ordered by his family indicated that he died of asphyxiation . The official health report published in June said he had died of heart failure, relieving three police officers of their responsibilities.

Several cases of alleged police violence were revealed by videos posted on social networks. Cédric Chouviat, a delivery driver in Paris, suffered a heart attack and died in January after police suffocated him. Several Yellow Vest protesters were clubbed inside a Burger King in Paris in December 2018. Images of the two incidents initially surfaced on social media, sparking public outrage.

“A law that kills freedom”?

Anne-Sophie Simpère, an activist for Amnesty International France, said the amendment was not enough and that the government should withdraw article 24 in its entirety.

France’s official rights ombudsman, Claire Hédon, also said Article 24 should be withdrawn, calling it “unnecessary”. She added that several other clauses in the text were “likely to violate human rights”, including the right to privacy.

Clause 22 of the Security Bill would give the police greater latitude in the use of surveillance drones. Simpère said drones could now be used in more unregulated circumstances. The development of facial recognition technology “raises new concerns,” she said, adding that drones should only be used “if there is a legitimate need and a clear purpose.”

Amendments to ban the use of facial recognition technology in drones were rejected on Friday morning.

Speaking to Parliament, Thourot stressed that there is currently no “legal framework” regulating the use of drones. Article 22 will allow them to be used only by security forces for purposes such as “the prevention of terrorist acts”, she said.

Another provision in the Security Bill would give local police new powers, including the ability to register minor infractions such as traffic violations and to carry out identity checks. Currently, only the national police have these powers.

The security bill would also reform the regulation of the private security sector, in particular in anticipation of the 2023 Rugby World Cup in France and the 2024 Paris Olympic Games. It aims in particular to “drastically reduce” the number of subcontractors in industry to tackle what Thourot called the “uberisation” of industry. The legislation would encourage the employment of retired police officers by allowing them to combine their pensions with the wages of security workers.

In addition, the bill would allow the broadcast of recordings from the police corps cameras so that social media videos of the police officers can be crossed with them. Supporters of the bill say police videos posted on social media are often truncated and frequently feature officers’ actions without the necessary context.

Stanislas Gaudon, the leader of the Alliance police union, told TBEN that such images would help protect the police officers in the line of duty.

“We hope to use body cameras in these cases to show the truth about what happened” when there are allegations of inappropriate behavior by the police, he said.

This article has been adapted from the original in French.