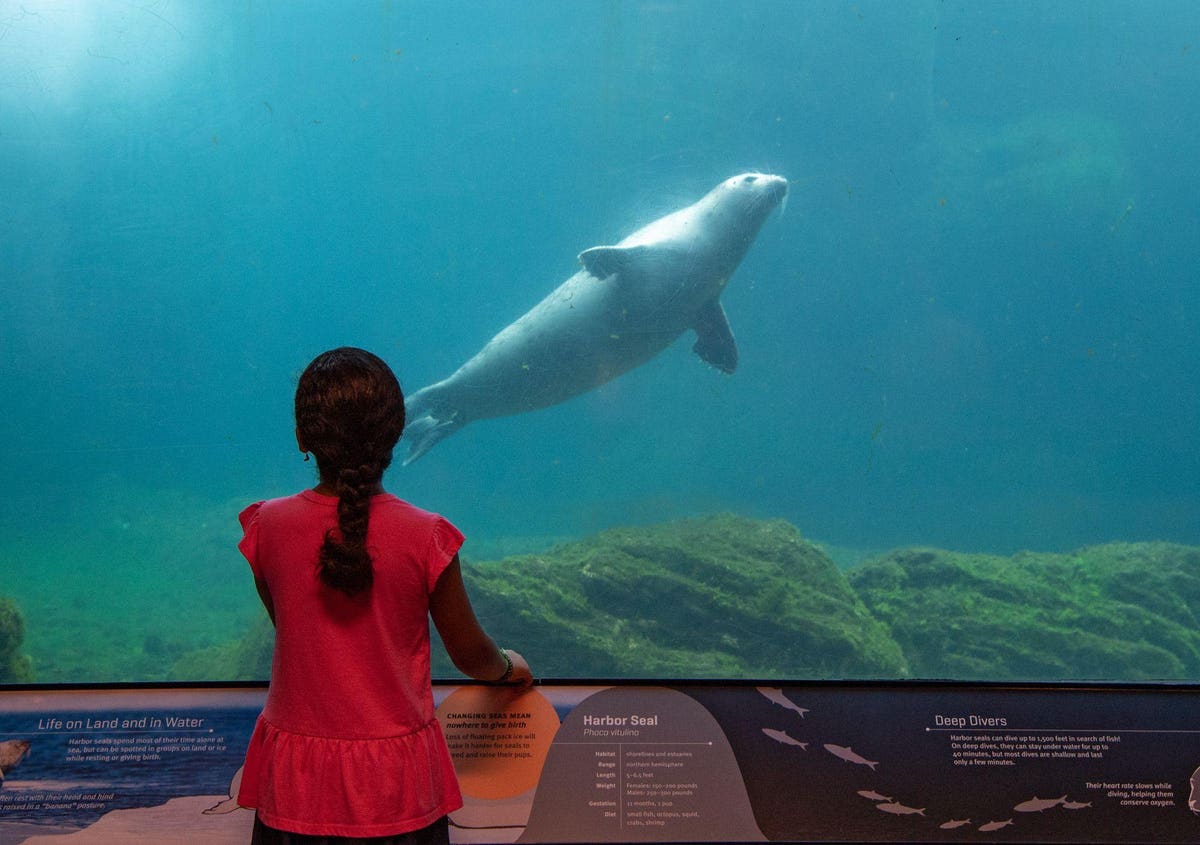 Honey, it’s hot outside. To coincide with the sizzling weeks of the year, this episode of New York Art in Place heads inside to enjoy music and marine life. That is, with one notable exception: the city’s most glorious and important outdoor space.

Susan Chin, WCS Vice President Planning & Design and Chief Architect: “The Wildlife Conservation Society’s New York Aquarium is finally fully open to the public! The opening of Sea Change at the New York Aquarium is the last public exhibit to reopen after a decade of restoration work from the damage sustained by Superstorm Sandy. Fittingly, Sea Change is an exhibit that focuses on the effects of climate change on our oceans and the animals that live in them. Climate change doesn’t just affect people; animals, from crabs to fish to penguins, seals and sea lions, all illustrate how their wild counterparts live with the effects of climate change on the oceans. Extreme weather events are becoming more common and Superstorm Sandy has wreaked havoc on the aquarium, Coney Island and other coastal communities. It seems fitting that the Sea Change exhibition demonstrates the importance of mitigating future climate-related impacts.”

Trumpeter Diogo Muggiati-Feldman: “To me, Carnegie Hall is representative of the American magnum opus of the classical community. The amount of history and musical relevance associated with the venue is beyond amazing along with the many educational programs such as the NYO ensembles. To play with the NYO2 in the hall this year feels like a real achievement, especially with immigrant parents. I am proud to represent my family and also to be a part of this incredibly diverse and talented group of musicians. I already loved Gershwin’s Piano Concerto in F for the program, and playing with Aaron Diehl – a jazz pianist – means a lot to me as someone who has trouble choosing between classical and jazz styles. It has helped me realize that I can do both and still be successful as a musician.”

Alexa Tarantino, alto saxophonist and flutist: “As the newest addition to Artemis, I am excited to start my first performances with the band in Birdland. I admire all current and former members of Artemis and am grateful to contribute to this amazing collective.

Birdland is a special home for jazz musicians in New York City – its unique history lives on in a palpable and infectious energy that fills the room. As a high school student, my parents took me to Birdland to see TS Monk. At that time, alto saxophonist Bobby Porcelli played with him. Fast forward to 12 years later, and I ended up sitting next to Bobby in Birdland every Sunday night while we played with Arturo O’Farrill & The Afro-Latin Jazz Orchestra!

A big thank you to Gianni and the Birdland staff for all they do, and to the audience who help bring each performance to life!”

When you walk into Central Park, you are immediately transported to a haven of greenery and open spaces where everyone can plant their feet in the ground and dream in the vast sky. Then, as you walk past The Delacorte Theater, you will feel the spirit of hundreds of artists who opened their hearts to the public for 60 years. But once you enter the theater and witness a story unfold under the stars with fellow New Yorkers, it’s a heartbreaking experience. Now imagine more than a hundred of your neighbours, from all parts of the city, on stage bringing their lived experiences to this Shakespearean text that feels as fresh as when he wrote it in 1599.

This pastoral game lives perfectly between the trees of Turtle Pond and Belvedere Castle. In ‘As You Like It’, during a moment of political turmoil, people are thrown into court, into the forest of Arden, where they turn adversity into communal kindness. Together they learn to heal and turn grief and loss into forgiveness and love. During this pandemic, we have all had to relearn what our ancestors knew: that nature gives us back to ourselves. And together we are stronger.

Everything about this production is in close collaboration with Central Park. Our landscape designer Myung Hee Cho was inspired by the park. As she imagined the world of our play, you will see how everything from the Central Park bridges to the cherry blossoms make their way to our Ardennes. Nature, social engagement and making ambitious theater seem to us the perfect way to dream forward together towards reconstruction and healing.”

Avishai Cohen, jazz bassist, singer and composer: “Playing at the Blue Note really means a lot to me. I grew up there in a way and when I lived in New York I could see all the greats. I saw Joe Zawinul with the Syndicate, McCoy Tyner, Herbie Hancock, Eddie Palmieri – so many of my musical heroes. I played there with Chick Corea’s band and then with my own bands! It’s been like a long creative relationship with the club and playing the Blue Note in general is an honor and pleasure for me.

I’m really looking forward to my Blue Note week in August (16-21), which will mark the American debut of my new trio with pianist Elchin Shirinov and young Israeli drummer Roni Kaspi. I will be playing music from my latest trio album, “Shifting Sands” (Naïve/Believe, May 2022) – brand new original compositions, fan favorites and repertoire from my music library, many tunes that debuted on the Blue Note over the years.

The Blue Note brings together so many countries, different people from different places. You see Japanese, South American, European people; they all come especially to visit the Blue Note from all over the world to see those shows, which I am so privileged to give. The Blue Note network is a serious global home for jazz that I look forward to returning to time and time again.”

Bruce Wheeler, CEO: “Come on! We are located directly across the street from the Port Chester train station, a short Metro North ride from Grand Central Station. You can drive up, plenty of parking, or many people take an Uber there and back.

The theater has an intimate feel, numerous bars, not a bad seat in the house, plus great restaurants nearby to visit before or after the show. (Make reservations!) The atmosphere in the theater is thick and the history of this 96-year-old venue and the artists that have performed here is quite amazing. Amazing light and sound, plus a wall projection system that feels like you’re in an IMAX theater.

Are travel restrictions in Europe really over? What we learned during Covid

Happy Independence Day: Know Its History, Importance, Meaning and Why It Is Celebrated on August 15

Charging an electric vehicle outdoors has recently been a frustrating, time-consuming undertaking