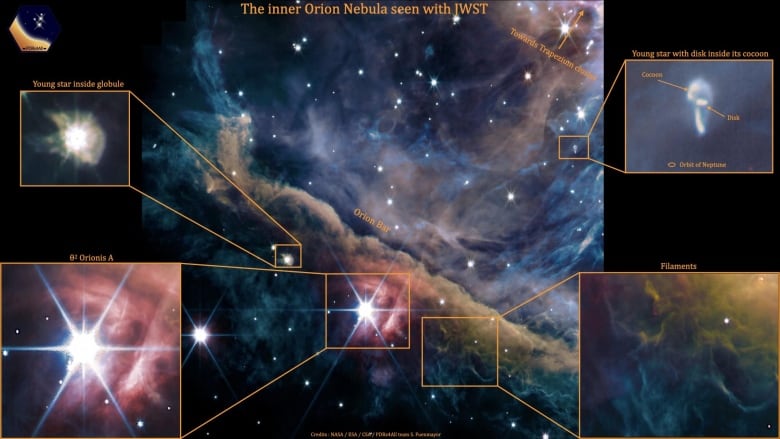 Located more than 1,300 light-years from Earth, there is a beautiful region of dust and gas called the Orion Nebula. On Monday, a team of astronomers from around the world captured the most detailed image ever of this rich star-forming region, taken by the James Webb Space Telescope (JWST).

Els Peeters, an astronomer and professor at Western University in London, Ontario, and one of the principal investigators of the JWST observation program known as PDRs4AlI, said she is excited about the image.

“It’s just the amazing detail, how sharp the images are, all this threadlike structure,” she told TBEN News.

The composite image – which used several filters – was taken with JWST’s NIRCam instrument. It shows an apparently windblown region of blue gas, a bright star illuminating the gas around it and, most prominently, a region of dense dust and gas known as the Orion Bar. But the most interesting are the filaments, spheres and young stars.

Although the region — just a small portion of the larger Orion Nebula, one of the closest star-forming regions — has been studied with other telescopes, most notably the Hubble Space Telescope, in infrared, JWST sees light that can see beyond optical light, peering through thick dust, revealing what the human eye cannot see that is hidden.

This is what Peeters is most interested in investigating. Her team has been studying the region since 2017 and is eagerly awaiting the new image. Previously, her team had used NASA’s Spitzer space telescope, which can also see in infrared — but nowhere near as much resolution as JWST can provide.

But this is more than just a pretty picture. It’s part of a study to explore how stars and planets form, and sheds more light on how our own solar system and planet formed. It looks at our origin.

“We’ve never been able to see the intricate fine detail of how interstellar matter is structured in these environments, and to figure out how planetary systems can form in the presence of this harsh radiation,” Emilie Habart, associate professor at the Institut d’ Astrophysique Spatiale in Paris, said in a statement.

Meanwhile, Peeters said massive, young stars — and even stars already in star-forming regions — give off intense ultraviolet radiation into the surrounding clouds. This can change not only the shape of the cloud, but also its chemical composition. She and her team want to understand how that works and how it could affect further stellar and planetary formation.

Some interesting finds in this image are also protostars, which are stars that are just beginning to form.

“You see a shining star nursery there in Orion, many young stars. We [also] see some protostars in this image. And so planets will form in some of these disks over time,” Peeters said, but added, “Probably not in our lifetime.”

This understanding of how gases and radiation play such an integral role in star formation doesn’t end with this new picture. The teams are still waiting for spectroscopic data, which will reveal the specific chemical elements in and around the region.

“If you want to understand star formation in the universe and your planet formation, you have to understand the basics,” Peeters said. “And so the Orion Bar is kind of like a lab: you go there, find out what’s going on, and then you apply that to other areas.”

And it’s also part of answering the big questions, she said.

‘Where do we come from? Are we alone?’ she said. “In that sense, I think understanding star formation, planet formation is part of that puzzle.”