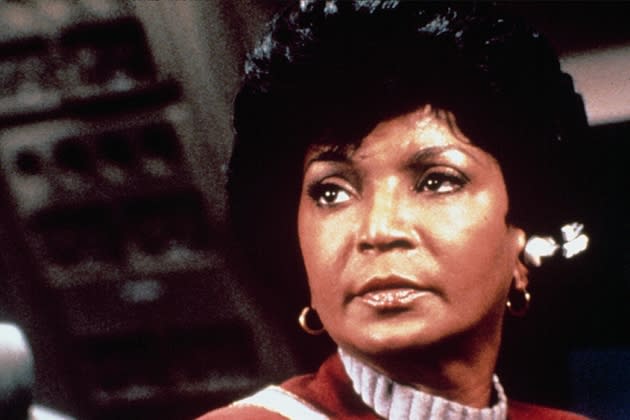 Nichelle Nichols, the trailblazing star of “Star Trek,” who died Saturday at age 89, was an epitome of unflappable professionalism as Lieutenant Uhura, and she never broke a sweat as she manned the communications desk of the Starship Enterprise.

But for Nicholas Meyer, the director and screenwriter of “Star Trek II: The Wrath of Khan” and “Star Trek VI: The Undiscovered Country,” his favorite on-screen memory of Nichols is a rare moment when Uhura doesn’t remember. for words. In the sixth episode, our heroes attempt to infiltrate the skies of Klingon without the use of a universal translator, who would betray them. That leaves Uhura and the rest of the crew scouring the Klingon dictionaries in a desperate attempt to have a conversation with another ship’s crew.

“Nichelle just reacts in the most horrible Klingon [dialect], and her face looks so pained and at one point one of them makes a joke in Klingon,” Meyer recalls. “She doesn’t understand, but understands that she should think it’s funny, so she laughs heartily and then abruptly disconnects. It was just brilliant.”

Nichols broke barriers as one of the first black women to star on network television. And Nichols understood the impact that kind of representation had on the public and used her celebrities to increase the opportunities for others by partnering with NASA to recruit various astronauts.

Meyer, who spoke to Variety After the news broke that Nichols had passed away, she sees parallels between her work and that of Bill Russell, the NBA legend and champion of civil rights, who died Sunday.

My experience writing and directing “The Wrath of Khan” was chaotic in many ways. It was only the second film I’d ever directed and I was relatively unfamiliar with the entire “Star Trek” world. What I found remarkable, not just about Nichelle, but the entire cast, was how professional and courteous they welcomed a newcomer to that world and taught me how it worked and how they worked together.

When “Star Trek” was a television series, they got used to the idea of ​​different directors, different writers coming in for the different episodes, so they were professionally experienced. They were just incredibly helpful to me. And she was incredibly helpful. I was also writing the screenplay and she said things like, “This isn’t exactly how Uhura would express herself here.” She would give me her version, and then I would adapt it.

Nichelle told me to keep in mind that Uhura’s professionalism transcends her gender. This is a trained officer who is imperturbable. She said, “If you listen to those NASA communications officers, all hell might break loose, but they never betray that in their way of talking. They remain calm.”

As for Nichelle, she was always professional and prompt. She knew her lyrics and wasn’t shy about contributing. I remember her giving me a lecture on “Wrath of Khan” and saying, “Look, you’re saving my close-ups for the end of the day. That’s not the best time to shoot an actress.” What did I know? So we went back to the scene first thing in the morning.

Nichelle was multi-talented in that Leonard Bernstein way. She was good at everything she touched. She could dance. She could sing. She could act. A born storyteller, she was also fearlessly candid about things that mattered to her, whether those things were important in the scene or cultural and political issues.

I think that meeting with Dr. King, when he told her to stay on the show because it was important to so many black viewers, really opened a window for her and shed some light on what she was doing in ways she hadn’t thought a lot about before . But once he made it clear to her what good it could do for her to be on “Star Trek,” she kind of carried on with that for the rest of her life. She worked a lot with NASA and she knew exactly what she was doing and she was great at helping them recruit for them.

When we worked together on “Star Trek VI,” it was a bittersweet experience because it would be the last film for the original cast, and they knew it. But it didn’t really affect it until we filmed the last scene of the movie, which was on the last day of shooting. It was psychologically built into the schedule that day. Well, nobody was happy. It was, “I don’t like this rule or I don’t like that rule. Can we try again?” It wasn’t just Nichelle. Everyone had ambivalent feelings. These people had been associating for decades and had to make peace with the hand that fate had dealt them. The success of the show and the movies had paid for houses and children’s braces, but they were also chained together forever. They had complicated feelings about each other and about other jobs they might have wanted to do but had to turn down or didn’t qualify for. They were a family. They didn’t always get along. It can be tricky, as families often are. But now it was time to say goodbye and saying goodbye is usually harder than anyone expects. Afterwards there was a wrap party and these are usually unambiguous parties. This was quite complicated. No one knew what to feel. It was something between a wedding and a wake.

When you say that something or someone is great, you are already suggesting some sort of uniqueness or specificity. God damn it, if great was just, we wouldn’t get so excited about it showing its face. Think of Bill Russell, whom we also remember now. It is the same. We are talking about greatness and greatness is inimitable, just like Nichelle. And both Nichelle and Bill Russell were pioneers. They were pioneers in the face of the most terrible adversity, which we would like to tell ourselves is a thing of the past, but we know that is not the case.

As told to Brent Lang.