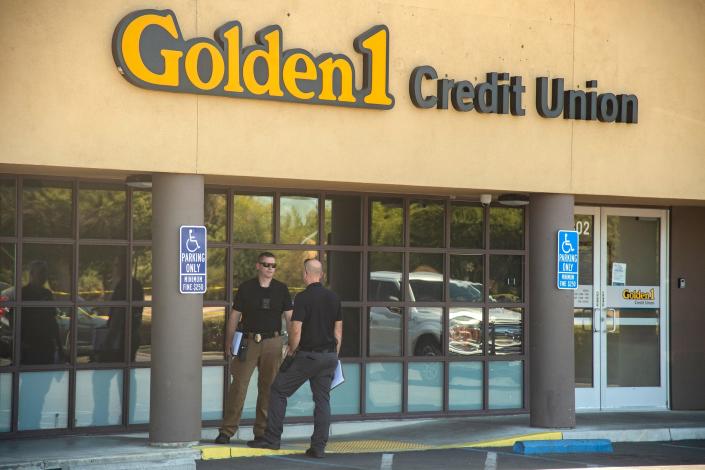 At 10:34 a.m. on Aug. 11, Stockton Police received a 911 call that a fight had broken out at Golden 1 Credit Union in the Sherwood Mall on Pacific Avenue.

No officers were sent out.

Stockton Police arrived at 10:52am

Several factors likely prevented the police from sending an officer when that first call came in, sources said.

Those factors included a call at 10:38 a.m., police said, indicating the fight was over, the number of high-priority calls that morning, and an understaffed police station, sources said.

Harris, 23, died of multiple gunshot wounds outside the credit union around noon that day. It was Stockton’s 32nd homicide this year, a number that has risen to 39 in the weeks since Harris’ death, police say.

On September 1, Laonard Allen Alexander was arrested in San Pablo and charged with murder in connection with the shooting.

“The family is very shocked by the incident, but we are grateful that the man has been arrested,” Harris’s family said in a statement.

The first call came in at 10:34 a.m. to report that a fight had broken out between a man police said was Alexander and Harris., according to Silva.

“It was two boys, the shooter and then the person who died,” said a witness, who declined to be identified for security reasons.

The alleged gunman appeared to be trying to provoke Harris into a fight, the witness said. “The person who was shot was trying to defuse the situation. He didn’t argue, he took all the punches and blows he gave him.”

According to Silva, no officers were sent to investigate the fight because the officers on duty in the district that morning responded to higher-priority calls.

In another call that came in at 10:33 a.m., police were informed that a man with a large knife had been spotted on West Hammer Lane, Silva said.

Checking out: Body, vehicle found in Calaveras River near Pershing Avenue, under investigation

Meanwhile, when the fight was reported to Golden 1, the caller said no weapons were visible, according to Silva.

According to Jeff Hislop, a former San Joaquin County Sheriff’s Lieutenant and instructor at the San Joaquin Delta College Police Academy, police departments prioritize calls based on the risk of immediate damage.

ALSO READ  Is Biden's Offshore Wind Turbine Plan Worth It? What to know.

“If everyone is stuck, there’s a priority system where they can interrupt someone on one call and send them to another.”

According to Silva, officers were not sent to the credit union until after the shooting.

“Of course, if officers had arrived when it was still a fight, they could have intervened,” Hislop said.

At the same time, “it’s hard to say whether they could have gotten there faster based on the conditions that day,” he said. “Everything in law enforcement is unpredictable.”

‘You deserve a timely response’

An officer may have been available to respond to the fight before it escalated into a murder if the police were better staffed, the Stockton police union said.

The “obvious daytime murder at a local bank may have been prevented by getting more staff,” said a Stockton Police Officers Association report the day after the shooting.

On September 2, Stockton Police Department was 100 below the 485 it would have at full capacity, according to Silva.

“Obviously, if you have more staff, you have more available resources, and the likelihood of someone responding sooner increases exponentially,” said April Heinze, director of the National Emergency Number Association and former 911 coordinator.

“No one really knew it was gunshots. I thought (the shooter) hit the wall, the other people thought it was a construction staple gun,” said the witness, who was within the credit union. Five to seven shots were fired, the witness said.

Silva said in order not to jeopardize the criminal case against Alexander, the police would not give details about what happened between the second and third phone calls.

“We don’t know anything about what happened yet,” the Harris family said in the statement. The family plans to organize against gun violence in Stockton in response to Harris’s death, they said.

“We want to be the ones to get it going here in Stockton. We can’t save everyone’s city, but we’ll start with our own.’

Dig deeper: A Lincoln High student pulled out a gun during a conflict. How did he get through the security checks?

Record reporter Aaron Leathley covers personal safety and law enforcement. She can be reached at [email protected] or on Twitter @LeathleyAaron. Support local news, subscribe to The Stockton Record at recordnet.com/subscribenow.

This article originally appeared on The Record: No Officers Sent to Golden 1 Until After Deadly Shooting