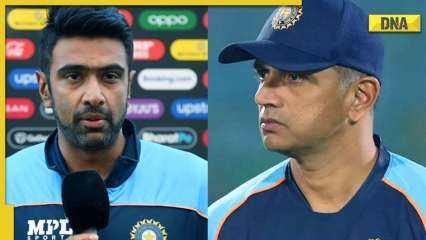 Spinner Ravichandran Ashwin on Saturday justified India’s choice to rest head coach Rahul Dravid by claiming that physical and mental stress ahead of and during the ICC T20 World Cup is the reason India has a completely different team and coaching staff for the tour of New Zealand.

VVS Laxman, the current head of the National Cricket Academy (NCA) and a former Indian batsman, is the head coach of the Indian squad, which is captained by all-rounder Hardik Pandya and has no veterans like regular skipper Rohit Sharma, Virat Kohli, KL Rahul , Mohammed Shami and Ashwin himself.

“I will explain why Laxman went there with a completely different team, because even that can be interpreted differently. Rahul Dravid and his team have worked extremely hard ahead of the T20 World Cup, right from the planning, as I have seen this up close . , I say this. They had specific in-depth plans for each venue and each opponent. So they would be burned out not only mentally but physically and everyone needed a break. Once the New Zealand series is over, the Bangladeshi tour. That’s why we have a different coaching staff led by Laxman for this tour,” Ashwin said.

“I don’t believe in breaks. I want to understand my team and players, and then have control over that team. What do you need those many breaks for, to be honest? You get your two-three months from the IPL, that is enough for you to rest as a coach. But other times I think a coach should be hands-on, whoever he is,” Ravi Shastri told a select group of journalists during a call organized by Prime Video.

Dravid also got some rest during the Zimbabwe tour earlier this year. Before that, he and other senior players were part of another camp that traveled to England to play the postponed fifth and final Test against England, while VVS and a second-tier side traveled to Ireland for a two-match T20I series.

India’s current New Zealand tour includes three Twenty20 Internationals and three One-Day Internationals, the last of which will be played on November 30. Four days later, the team will be in Bangladesh, with Dravid back at the helm, for a three-ODI and two-Test series.

ALSO READ  Manika Batra makes history, becomes the first Indian woman to reach the semi-finals of the TT Asian Cup; everything you need to know

NFL Power Rankings: The Rams stink, but their approach was completely worth the pain