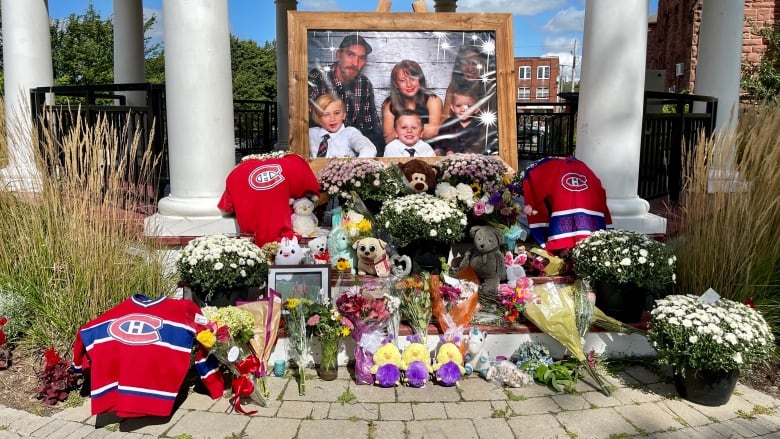 Standing near a makeshift memorial in the heart of a northern Nova Scotia town, Nellie Lloy recalled a summer spent at her secluded property, chopping trees and planting flowers with the family of his niece.

They had set up a trailer on the grounds of Millvale, Nova Scotia, and it became a family getaway nestled in the woods of countryside Nova Scotia.

But last weekend it was the scene of a tragedy that many are struggling to cope with.

The bodies of six people – including four children – were discovered Sunday evening following a fire in the trailer.

The family was from Amherst, Nova Scotia, a town just outside the Nova Scotia-New Brunswick border.

On Monday, a large photo of the family was placed in a gazebo in the city’s Victoria Park as part of a tribute.

As of Tuesday afternoon, the makeshift memorial had grown to include dozens of flowers, stuffed animals and several Montreal Canadiens jerseys.

Family and community members gathered in the park for comfort on Tuesday.

Lloy, Robertson’s aunt, described her niece as a dedicated mother who, along with her partner, brought joy into the lives of their children.

“Michelle was born special and her whole purpose in life was just to be a better person,” Lloy said. “I think the only word I could use to describe Michelle was ‘thanks’.”

Lloy explained that she owns the property where the fire started in Millvale, a small community in Cumberland County, about 50 kilometers southeast of Amherst. The family was staying there in a trailer for the weekend.

“We spent the summer (…) clearing the land by rain, sun, mosquitoes and black flies. These children dug holes and we planted dozens and dozens of plants. It would be just our family garden, ”Lloy said.

“The kids painted rocks. We had so many magical moments on this property with the family.”

She said CJ had just turned three about a week ago and the family had gone camping to celebrate her birthday because Robertson had been working the previous weekend.

Lloyd said Robertson and Sears grew up together.

“I still see them as the little family that could do it,” she said, adding that Robertson had recently started working after being a stay-at-home mom, and that made her happy.

“They were just in the most beautiful place of their life right now.”

Lloyd said Madison, 11, was involved in the sport and had many friends. She said eight-year-old Ryder was kind and had a depth in her heart beyond his years. Four-year-old Jaxson was an animated boy nicknamed “Action Jaxson”. And CJ was born “too smart” and hasn’t missed a beat in the busy family.

Amherst Mayor David Kogon said the community was in shock at the news and there was an overwhelming sense of sadness.

“People are just in shock and heartbroken,” he said in a telephone interview on Tuesday.

“You don’t lose an entire family of six without everyone having their own reaction to that loss.”

Kogon said the city created the memorial in collaboration with Cumberland North MPP Elizabeth Smith-McCrossin to give the family and the community a space to mourn.

“It is a place where people can gather, pay homage, place flowers or a teddy bear, to help them cope with the loss that every citizen feels,” Kogon said.

The Regional Education Center in Chignecto Central, the area’s school district, confirmed that three of the children were students.

In a statement, a spokesperson said school psychologists were made available at Cumberland North Academy and would also facilitate access to short-term counseling and other community supports beyond the grade level. .

A few family fundraisers were also taking shape on Tuesday.

Firefighters were called to Mountain Road in Millvale on Sunday around 6:30 p.m. local time. Police said that upon arrival, officers discovered the bodies of the family.

It took the officers about half an hour to get to the scene because they had to take old logging roads, RCMP Corporal. Chris Marshall said. The fire was out when they arrived at the scene and there were no survivors.