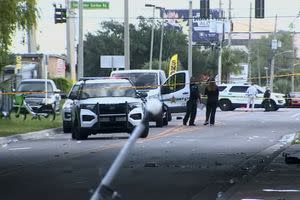 Orange County officers have identified the man who died in an early morning shooting.

The officers said they were nearby when they heard shots.

When they arrived, officers found a man in his 20s who had been shot.

He was taken to hospital and later pronounced dead.

The deputies have not released any other information about the shooting.

ALSO READ  Escaped from shelter caught, arrested while he and family were busy setting up his birthday party