Speaking to the press, the senator detailed a memo written by a National Transport and Safety Authority (NTSA) official and addressed to Director General Benjamin Njao.

The memo, which was prepared by the Director of Registration and Licensing, asked whether the Authority could use direct purchasing when producing mass license plates.

Omtatah was stunned by the memo revealing that Matiang’i had a preview of the digital plates during its August 30 launch, announcing that the new product was ready for rollout.

ALSO READ  NSSF Excluded From Mandatory Withholding From Your Salary

“Around August 30, CS Fred Matiang’i of the Interior had a meeting in Ruiru and had samples of the digital license plates. He announced that the plates would be put into use on October 1, and people were given 18 months to buy the plates. obtain at a cost of Ksh3,000

“What is shocking is that I received a particular memo dated September 6 to the Director General from the Director of Registration and Licensing. The letter asked for permission to use direct purchasing. If these license plates were already made for use and samples launched , why the need for procurement,” said Omtatah.

As a result, the senator announced that he planned to petition NTSA over the tender process.

During the launch, Matiang’i noted that the license plates would apply to all cars, including motorcycles and tricycles, trailers and tractors, both private and government-owned.

The shift, which is mandatory, will also affect vehicles used by diplomats and international organizations will adopt the new generation plates.

The digital plates will be synchronized with the Kenya Revenue Authority (KRA) systems to catch dealers who are evading tax.

“We do this because we want to address the security of our country. We want to help other agencies such as KRA to function properly, improve the financial sector and improve transparency,” Matiang’i said at the time. 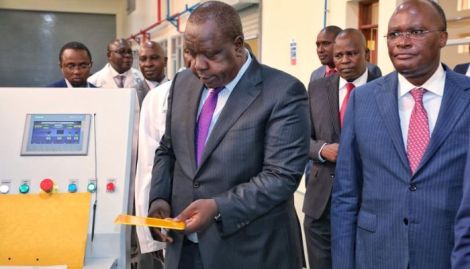