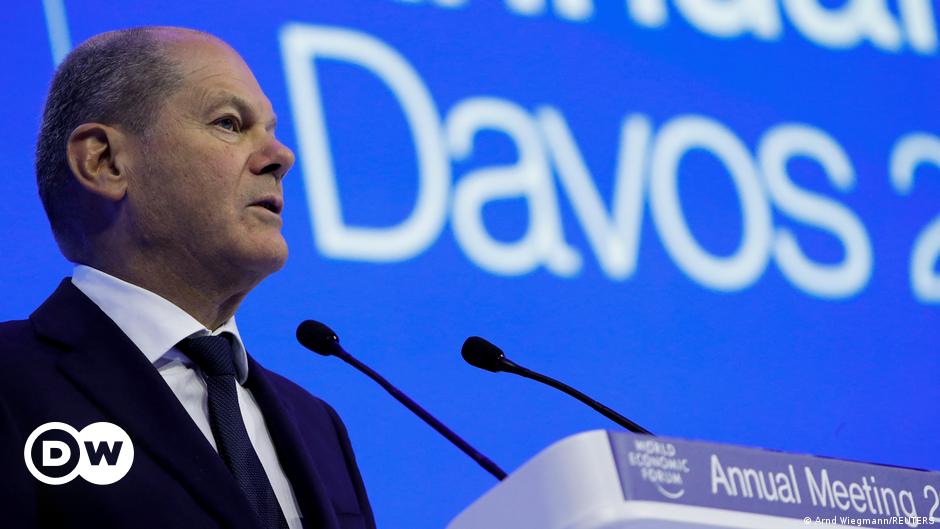 “What a difference a year makes. At the start of 2022, many people expected a boom or at least a substantial boost to our economies’ transition to climate neutrality. Then February 24 came,” Scholz said, referring to the date of the invasion .

He said the war had a devastating effect on Ukraine in particular, citing the death of the interior minister in a helicopter crash on Wednesday and his condolences.

“But the war affects all of us,” Scholz said.

He then outlined the risks to the geopolitical order, challenges for several countries, not least Germany, to quickly abandon Russian fossil fuel exports, inflation and other issues.

However, he tried to argue that opportunities to accelerate the green transition could prove to be a rare positive by-product of the turbulent year.

Scholz is the only G7 leader to address the WEF this year as the relevance of a summit that is primarily a gathering of the world’s super-rich is increasingly questioned. Although the forum is hosted in the Swiss Alps, its founder is a German economist, Klaus Schwab, and Berlin’s ties to the event are traditionally strong.

“To end this war, Russia must fail”

“The other part of the story is this,” Scholz said. “Russia has completely failed to achieve its imperialist goals. Ukraine is defending itself with impressive courage.”

Scholz also said that “Russia must fail” to end the conflict in Eastern Europe.

“That is why we are continuously supplying weapons systems to Ukraine, together with our partners,” said Scholz, listing some of the weapons systems Germany has sent to Ukraine so far, including the IRIS-T medium-range surface-to-air missiles. , one of the most recent and advanced examples.

He named the existing armored vehicles as Marders (weasels in English, Germany names most of its military land vehicles after animals) that Germany had sent out.

He did not talk about the Leopard 2 tanks that some NATO allies, especially Poland, but also the UK and Lithuania and others, have encouraged Germany to allow for export to the front lines. Germany must approve the resale or donation of its military equipment to a third country.

A meeting of NATO defense ministers is scheduled for Friday at US Ramstein Air Base in Germany, where the topic is likely to be discussed at least behind closed doors.

Scholz said Germany had also made “more than €12 billion” (about $13 billion at the current exchange rate) available to Ukraine and would continue to support the country “for as long as necessary”. He called on the private sector to play a “key role” in nascent plans for the so-called “Marshall Plan for Ukraine”, jointly recommended last October by Scholz and European Commission President Ursula von der Leyen.

Scholz also focused on the rapid change in Germany’s import habits in 2022 as European countries stepped up sanctions against Russia and the Nord Stream gas pipelines were blown up.

“Within a few months, Germany has made itself completely independent of Russian gas, Russian oil and Russian coal,” he said.

He spoke of several new liquefied natural gas (LNG) storage terminals, including one in Lubmin he opened Saturday, that were either operational or planned. He called this good news “for our energy security and that of our European neighbors who will receive gas from these terminals.”

“And so I can say that our energy supply for this winter is secure,” said Scholz.

This was reflected in global markets, he said, where energy prices had recently seen “a massive stop and fall,” particularly in the second half of 2022.

He also tried to assure “our partners in Asia, Latin America, Africa and the Caribbean” that “the fact that we buy LNG on the world market must not lead to scarcity elsewhere”, and vowed to prevent this from happening. “We are aware of our obligations,” he said.

As a rule of thumb, less affluent countries further from the war in Ukraine and outside NATO have taken a less hard line against Russia, yet also face Western pressure to do more, despite having relatively less purchasing power.

Scholz also noted a gradual slowdown in still high inflation levels – caused in no small part by energy price instability – and praised “resolute action” by central banks to curb it.

On climate: ‘Germany can be flexible … and we can be fast’

But Scholz probably devoted most of his speech to climate change, the green energy and industrial transition, and Germany’s targets to reach net neutrality in carbon emissions by 2045.

He said the invasion of Russia, rising energy prices and natural disasters around the world meant, “It is now crystal clear to all of us that the future belongs solely to renewables.”

He said Germany planned to “maintain a strong manufacturing sector” as it moved towards carbon neutrality, and said he hoped ingenuity and technical innovations could help facilitate this. He cited Germany as the place where the first effective COVID-19 test and vaccine were developed as an example of this ingenuity.

He tried to argue that Germany was shaking off its reputation as an overly bureaucratic country where change can sometimes be laborious and slow to come about, saying that 2022 had “above all” shown that “Germany can be flexible. .. fast.”

“We will make no less than 2% of our land available for wind energy with a minimum of red tape,” said Scholz, attempting to cite an example. While Germany was one of the first countries to invest heavily in renewables and remains one of the world leaders in terms of the share of electricity from renewables, progress in this area has stagnated in recent years, partly amid political and public backlash against the construction of onshore wind turbines, often on ascetic grounds.

He said the green transition should not be the “end of our industrial powerhouse, but a fresh start”.

Warning against ‘economic decoupling’ and ‘protectionism’

However, he also gently chided the US over parts of the legislation – in line with similar concerns from the EU and other European countries – saying that “protectionism hinders cooperation … and is detrimental to climate change mitigation”.

In particular, European countries have objected to US provisions that intend to provide large subsidies to green industries, but only if they are based in the US. Washington has indicated its willingness to discuss these concerns without committing to any changes at this time.

Earlier in his speech, Scholz had warned of a more general “danger of a new fragmentation of the world and the dangers of economic decoupling,” which he called a “Sword of Damacles” (a biblical reference to an ever-present threat looming over one’s head). ). This phenomenon was most visible in the case of Russia, but was not limited to it, he said.

“Those who want to roll up their sleeves are welcome: that is our message,” he told future newcomers.

Finally, perhaps once again betraying his political past by taking care of the German treasury, Scholz concluded by asking the audience to imagine a future German chancellor who addressed the Forum in 2045 and presented Germany as “one of the world’s first carbon neutral industrial nations”.

He concluded with an open appeal to people to agree to his plan: “If you were to ask me today where you can invest sustainably in the future with a high return, my answer is: Look no further. Come to us in Germany and Europe.”

A crisis of raw materials and supply chains

The Bharat Express News - February 3, 2023 0
Follow us on Telegram for the latest updates: https://t.me/TBEN A young restaurant in Japan was filmed licking a bottle of soy sauce and a...