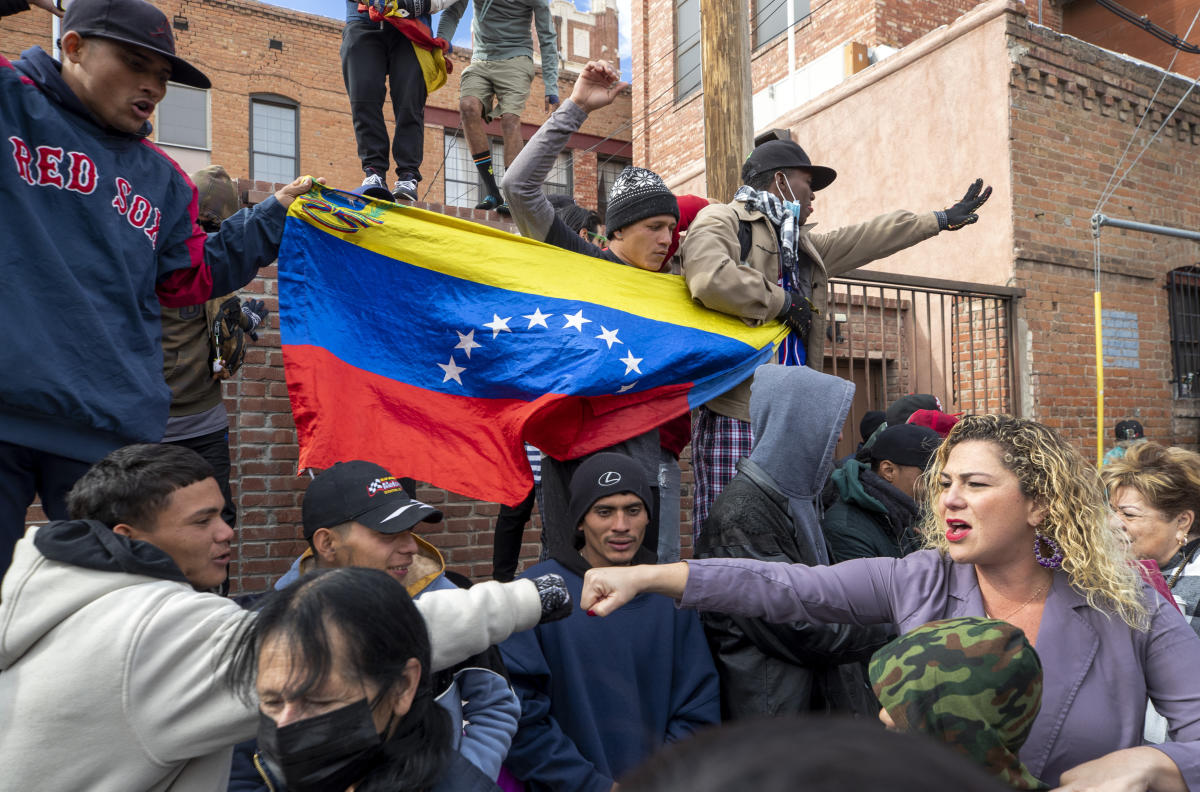 EL PASO, Texas (TBEN) — Several hundred people marched through the streets of El Paso Saturday afternoon, and when they arrived at a group of migrants huddled outside a church, they sang to them “no estan solos” — “you’re not alone .”

About 300 migrants have taken refuge on sidewalks outside Sacred Heart Church, some of them fearful of seeking more formal shelters, lawyers say, amid new restrictions designed to crack down on illegal border crossings.

This is the scene that will greet President Joe Biden during his first, politically thorny visit to the southern border on Sunday.

The president announced last week that Cubans, Nicaraguans, Haitians and Venezuelans will be deported to Mexico if they enter the U.S. illegally — an extension of a pandemic-era immigration policy called Title 42. The new rules also include offering humanitarian parole for up to 30,000 people per month from those four countries if they apply online and find a financial sponsor.

Biden will arrive in El Paso on Sunday afternoon before traveling on to Mexico City to meet with North American leaders on Monday and Tuesday.

Dylan Corbett, who runs the nonprofit Hope Border Institute, said the city is experiencing an increasing “climate of fear.”

He said immigration enforcement agencies have already started ramping up deportations to Mexico, and he senses growing tension and confusion.

The president’s new policy builds on an existing effort to prevent Venezuelans from trying to enter the US, which began in October.

Corbett said many Venezuelans have since been left in the dark, straining local resources. He said extending that policy to other migrants will only worsen conditions for them on the ground.

“It’s a very difficult situation because they can’t go forward and they can’t go back,” he said. People who are not processed cannot leave El Paso due to US law enforcement checkpoints; most have traveled thousands of miles from their homeland and refuse to give up and turn around.

“There will be people who need protection who will be left behind,” Corbett said.

The new restrictions represent a major change in immigration rules that will apply even if the US Supreme Court overturns a Trump-era public health law that allows US authorities to reject asylum seekers.

El Paso has quickly become the busiest of the Border Patrol’s nine sectors along the US border with Mexico, occupying the best slots in October and November. Large numbers of Venezuelans showed up in September, attracted by the relative ease of crossing, robust networks of shelters and bus services on both sides of the border, and a major airport to destinations in the United States.

ALSO READ  The NATO alliance is holding tight to Ukraine. But fractures are emerging.

Venezuelans ceased to be a significant presence almost overnight after Mexico, under Title 42 authority, agreed on Oct. 12 to accept those illegally crossing the border into the United States. Since then, Nicaraguans have filled that void. Title 42 restrictions have been applied 2.5 million times to deny migrants the right to seek asylum under US and international law to prevent the spread of COVID-19.

US authorities detained 53,247 migrants in November in the El Paso sector, which spans 260 miles of desert in western Texas and New Mexico but sees much of its activity in the city of El Paso and suburban Sunland Park ,New Mexico. The most recent monthly census for the sector was more than three times the same period in 2021, with Nicaraguans by far the most important nationality, followed by Mexicans, Ecuadoreans, Guatemalans and Cubans.

Many gathered under blankets outside Sacred Heart Church. The church opens its doors to families and women at night, so not all the hundreds trapped in this limbo have to sleep outside in the falling temperatures. Two buses were available to warm people up and charge their phones. Volunteers come with food and other supplies.

Juan Tovar held a Bible in his hands, his 7-year-old daughter lifted on his shoulders. The 32-year-old was a bus driver in Venezuela before fleeing the political and financial chaos that has engulfed their homeland with his wife and two daughters.

He has friends in San Antonio who are willing to take them on, he said. He’s here to work and educate his daughters, but he’s stuck in El Paso without a permit.

“Everything is in the hands of God,” he said. “We are all human and we want to stay.”

Another Venezuelan, 22-year-old Jeremy Mejia, heard it and said he had a message he wanted to send to the president.