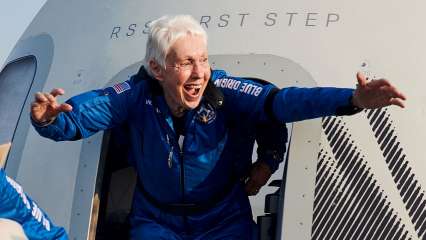 Amazon founder Jeff Bezos and his crew successfully completed a space flight Tuesday morning (local time). They were flying aboard the New Shepard, the rocket made by his space company, Blue Origin.

On board the flight were Jeff Bezos, his brother Mark Bezos, Oliver Daemen and pilot Wally Funk. Funk, 82, fulfilled her dream of flying in space and became the oldest woman to do so.

Funk says she waited decades to do something like this. She volunteered as a member of the “Mercury 13” program, also known as the “Women in Space Program”, in February 1961, a privately funded effort to begin training women in space. women to fly in NASA’s first space programs, TBEN reported.

However, she was never able to take the opportunity because of her gender, she said.

“I contacted NASA four times and said, ‘I want to be an astronaut,’ but no one took me, ‘Funk said. “I didn’t think I would ever go upstairs. Nothing ever bothered me. They say, ‘Wally, you’re a girl, you can’t do that.’ I said, ‘Guess what, no matter what you are, you can always do it if you want to do it,’ and I like to do things that no one has ever done before. “

Funk has extensive experience flying airplanes, totaling over 19,600 flight hours and teaching over 3,000 people how to fly private and commercial aircraft.

The 10-minute flight rose more than 60 miles above Earth on Tuesday and returned safely to Earth, a historic suborbital flight that is helping usher in a new era of private commercial space tourism.

US says thousands more Afghans may resettle there as refugees

The Bharat Express News - August 2, 2021 0
For over 130 years, the Goostrey Gooseberry Show has been a historic staple in the Cheshire countryside. But this year's event was marred...

Equinox and SoulCycle will require proof of vaccination from September