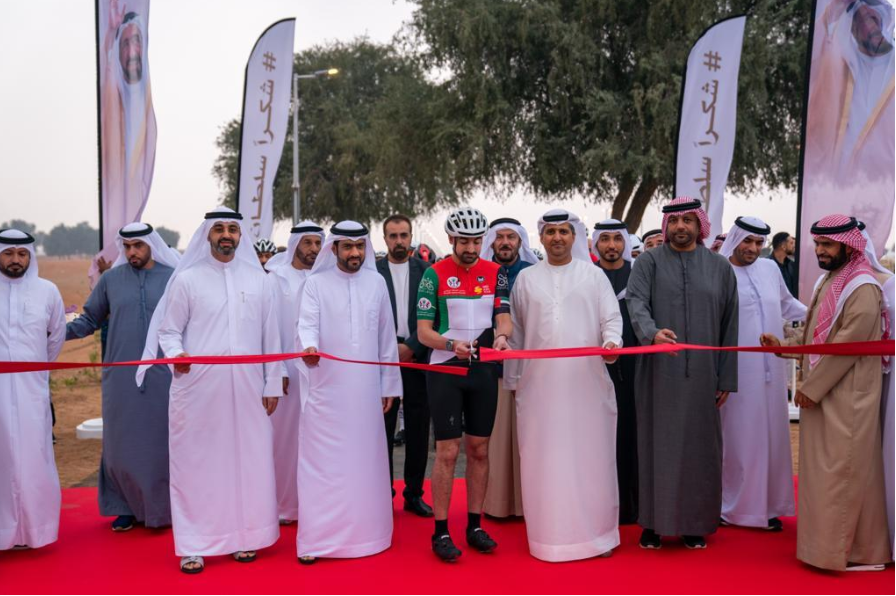 In implementation of the directives of His Highness Sheikh Dr. Sultan bin Muhammad Al Qasimi, Member of the Supreme Council and Ruler of Sharjah, to establish a path dedicated to practicing the sport and hobby of cycling in the Emirate of Sharjah .. Sheikh Saud bin Sultan bin Muhammad bin Sultan Al Qasimi, Director of the Sharjah Digital Office, today inaugurated the “Al Bataeh Bicycle Track” with its facilities The Sharjah Cycling Clubs team, which extends for a length of 24 km and 48 km back and forth, with a total width of 5 meters, and starts parallel to Maliha Street towards the “Al Munthar” area, reaching the “Al Buhais” area in the central region of the Emirate of Sharjah.

The inauguration was attended by His Excellency the Counselor, Engineer Salah bin Butti Al Muhairi, Chairman of the Initiatives Implementation Authority, His Excellency Engineer Khalid bin Butti Al Muhairi, Head of the Planning and Survey Department, His Excellency Engineer Youssef Khamis Al Othmani, Chairman of the Roads and Transport Authority in the Emirate of Sharjah, Muhammad Hassan Khalaf, Director General of the Sharjah Broadcasting and Television Authority, Issa Hilal, Chairman of the Sharjah Sports Council, and Mansour Bouassiba, President of the UAE Cycling Federation, and Yasser Al Dokhi, Secretary General of the UAE Cycling Federation.

The track is a distinguished tourist and sports destination for cycling professionals and amateurs in all regions of the emirate. It was designed and implemented under the supervision of the Initiatives Implementation Authority, in cooperation with the Planning and Survey Department and the Roads and Transport Authority in the Emirate of Sharjah, with international specifications that provide a stimulating and safe environment for practicing this sport due to its health, environmental and traffic benefits.

The location of the track was chosen based on several criteria, the most important of which is its attractiveness to cyclists and the provision of security and safety for them, as this track serves in particular the city of Sharjah, Al-Bataeh and the cities of the central region.

The path is divided into two main parts: the first is parallel to Mleiha Street, with a length of 9 km, and passes through it the “Oli Al-Nuha” mosque in the middle of the distance, and the second branches off in the direction of Mleiha from the Mahafaz Bridge through an area of ​​​​scenic nature along the Batha “Wadi Al-Murra”. The area is very popular with desert lovers. In winter, wild restaurants and cafes and various recreational activities are held.

Mohammed bin Rashid: We are always optimistic about the most beautiful future in the UAE