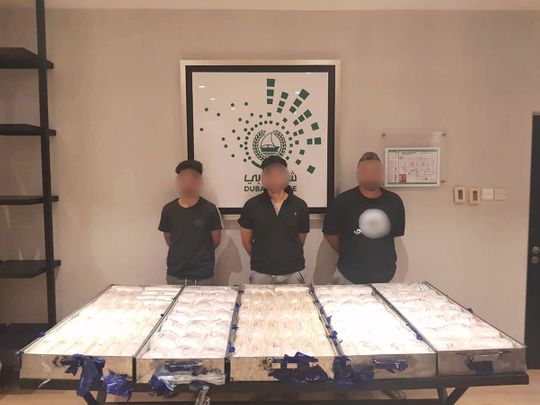 Dubai: Dubai Police recently foiled an international gang plot to smuggle 123kg of crystal meth into the country by hiding the narcotics in the bottom of a refrigerated shipping container from a country Asian.

Dubbed “the refrigerator,” the operation apprehended three gang members red-handed as they attempted to place contraband drugs in the bottom of the container for final delivery. The culprits were acting on the instructions of their leader, based in an Asian country.

Lt. Gen. Abdullah Khalifa Al Mari, Commander-in-Chief of Dubai Police, confirmed that Operation “The Fridge” is another example of the force’s continued efforts to combat and thwart drug traffickers and promoters who seek to spread drugs among young people. “The safety and security of the UAE community is a line that cannot be crossed. Our anti-narcotics agents are always ready and will spare no effort to eradicate these harmful toxins and bring drug traffickers and smugglers to justice, ”Lt. General Al Marri pledged.

Major General Khalil Ibrahim Al Mansouri, Deputy Commander-in-Chief for Criminal Investigations, said the successful cooperation between state-level drug agencies has been a key factor in thwarting attempts by criminals to smuggle and promote drugs in the country. “Based on the experience accumulated by the Dubai Police, Sharjah Police and Sharjah Customs anti-narcotics teams, we were able to dismantle the organization that sought to introduce and promote their toxins in our safe country, ”said Major General Al Masnouri. .

Brigadier Eid Mohammed Thani Hareb, director of the Dubai Police Department’s anti-narcotics department, said he had been warned of an Asian criminal gang located inside the country. “We learned that the gang was expecting a shipment of drugs concealed in a container intended to transport fruit and vegetables on a ship from an Asian country,” Brig. Hareb added.

Brig. Hareb said they immediately turned the case over to a specialized task force. “We made sure that all legal measures were also taken, including authorization from the Dubai prosecutor’s office to arrest and search the suspect, as well as to inspect his vehicle and his residence,” he added. Dubai Police have coordinated with Sharjah Police and Sharjah Customs to facilitate the team’s mission and intensify surveillance of the suspected refrigerated container.

“After unloading the container, the merchant placed it in a sand yard intended for parking and queuing of containers. Meanwhile, the undercover anti-narcotics team maintained close surveillance and waited for the gang members to come and collect their illegal cargo, ”Brig. Hareb added.

“One night, three people approached the yard and started looking for the refrigerated container.” “While they were unloading the drugs, our drug team took them by surprise and arrested the suspect red-handed and foiled his desperate escape attempt,” Brig. Hareb continued.

Brig. Hareb said during investigations, the suspects admitted to being directed by their boss, who lives in an Asian country, to offload the drugs and hide them for a while until they heard back. instructions for final delivery. The suspects also confessed to having carried out this operation in exchange for 12,000 dirhams.

The director of the Dubai Police Anti-Narcotics Department praised the cooperation and coordination with Sharjah Police, stressing that such joint efforts are essential to ensure the safety and security of the nation. He added that they always work closely with their local, regional and international counterparts to protect companies from drug traffickers and promoters.

The first line of defense

Brig. Hareb called on the public to report any suspicious activity to the Department by contacting Dubai Police Call Center 901. “It is everyone’s duty to report suspicious individuals and activities that harm our society. Especially drug related issues ”, Brig. Hareb said.

He recalled that Article 43 of UAE Federal Law stipulates that no criminal proceedings should be initiated against any abuser of narcotics or psychotropic substances who presents himself voluntarily.