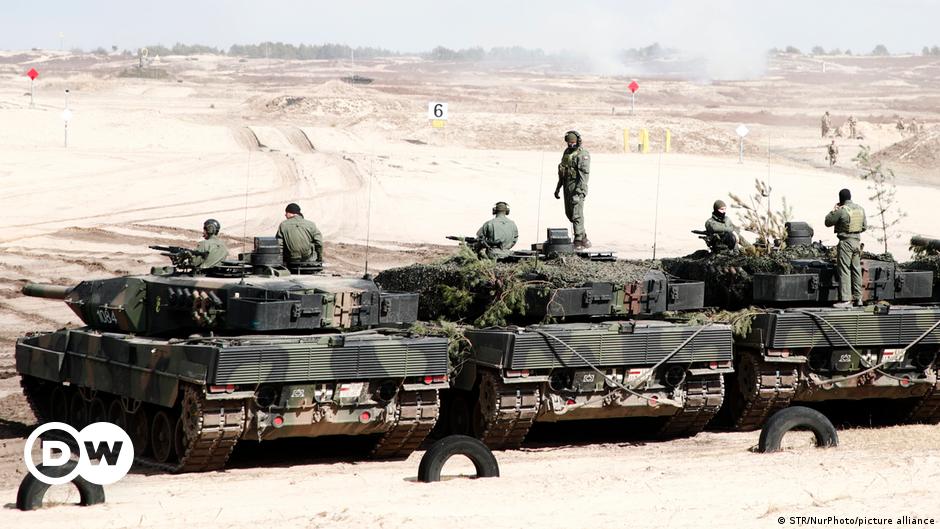 It is like déjà vu: Ukraine and its partners in the West are growing increasingly nervous as they watch the build-up of Russian troops, for example in Belarus, and wonder where and when President Vladimir Putin will strike next. Nearly a year after he invaded his neighbor, the ploy remains part of Putin’s attrition tactic.

Among Kiev’s allies, Germany is under increasing pressure to supply more weapons and is hesitant as the UK presses ahead and becomes the first NATO member to plan to send modern main battle tanks. Criticism of Berlin is mounting and Germany-bashing is once again the order of the day in the Twitter bubble. The old rift between Eastern Europe and Germany threatens to burst wide open again – reminiscent of the situation in the winter of 2022, when Estonia wanted to ship supplies of East German D-30 howitzers to Ukraine and Berlin objected and only agreed to the move after the Russian invasion.

This time it’s all about what is probably the best known and most sought after product of the German arms industry at the moment, the Leopard 2 main battle tank. It has become a symbol. Kiev has been asking Berlin for these tanks for months and has so far been told “no” – albeit less and less convincingly.

Recently, German Vice Chancellor Robert Habeck said that Berlin should not stand in the way of other countries wanting to perform. Poland and several other NATO countries are willing to give Ukraine their own Leopard 2 tanks, but they need approval from Germany, where they were developed.

At the start of the Russian invasion of Ukraine, Berlin was rightly criticized for its hesitant approach. That reluctance, as well as the construction of the Nord Stream 2 gas pipeline, represented Germany’s two biggest mistakes prior to the invasion.

Since then, the country has made impressive adjustments: Germany ended its dependence on Russian energy supplies in record time and arms shipments to Ukraine are increasing. Just a few weeks ago, Berlin announced plans to supply Marder infantry fighting vehicles and a Patriot air defense system to Ukraine. These are no small feats and Kiev could really show a little more gratitude, but sending Leopard 2 tanks is an opportunity for Berlin to dispel any lingering doubts about German reliability – an opportunity for a final correction of past mistakes, and a chance to close this chapter. .

Berlin must agree, and it will. The pressure is mounting and there are indications pointing in that direction, so it’s only a matter of time. It seems impossible to delay further without damaging the image of the country. And after Britain’s announcement it would no longer be a solo effort, which the Chancellor rejects due to German popular sentiment. Germany is ready to “take on the responsibility as one of Europe’s foremost guarantors of security,” wrote Olaf Scholz in a keynote article for Foreign Affairs magazine in December, promising to train and equip Ukrainian troops.

Agreeing to supply the Leopard 2 tank would really be a step in that direction – and the sooner the better. The next opportunity is the meeting of defense ministers on aid to Ukraine at the end of this week at the US base in Ramstein. It is a unique opportunity for Boris Pistorius, Germany’s new defense minister, to make a historic announcement and give the green light to tank deliveries. Ukraine and its partners don’t have much time. An even more brutal and bloodier phase of the war is upon us and Germany can no longer afford to hold back.