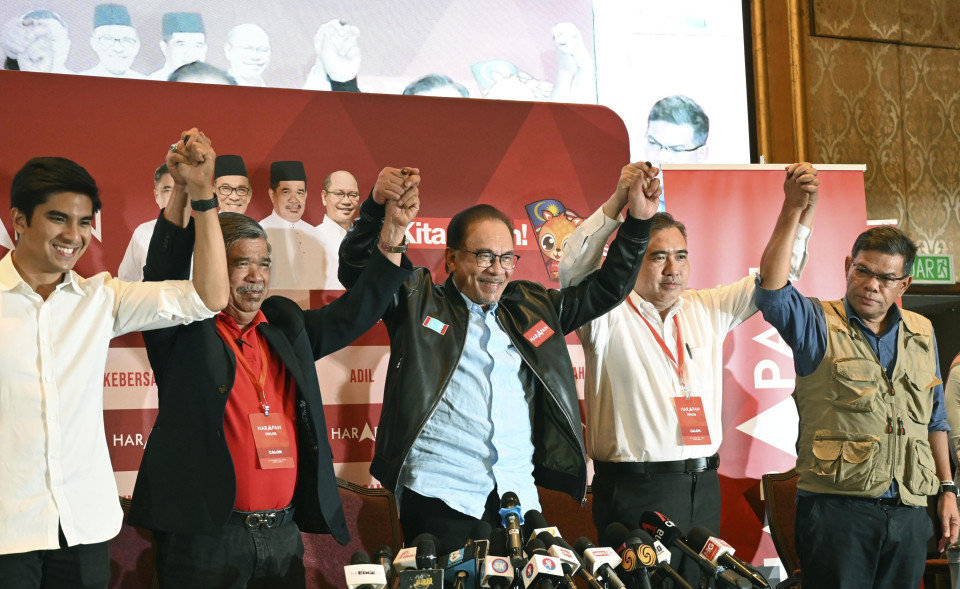 Malaysian opposition leader Anwar Ibrahim was sworn in as prime minister on Thursday after the palace named the former deputy prime minister as the country’s new leader following Saturday’s general election that resulted in a hung parliament.

Opposition leader Anwar Ibrahim (center) celebrates at a hotel in a suburb of Kuala Lumpur on November 20, 2022, following Malaysia’s general election on the previous day. (TBEN)

Neither of the two main coalitions, one led by Anwar and the other by former Prime Minister Muhyiddin Yassin, could secure enough seats in parliament to form a government. Ismail Sabri’s coalition came third in the number of votes.

Earlier on Thursday, the palace issued a statement appointing Anwar as prime minister after King Sultan Abdullah Ri’ayatuddin instructed the leaders of the two main coalitions in a series of meetings with them over the past two days to find a way for a government of unity.

Anwar, 75, who had served as deputy to then Prime Minister Mahathir Mohamad between 1993 and 1998, rose to the top in an extraordinary comeback after serving a total of nine years in prison for corruption and sodomy, which he and human rights groups claimed they fabricated allegations by his political rivals.

While behind bars, Anwar became a symbol uniting the opposition, which made significant progress in the general election from the 1999 poll.

Anwar was granted a royal pardon and released after the 2018 general election in which PH defeated BN, a coalition that has ruled since independence in 1957.

But PH’s rule was short-lived as it was cut short by political defections that brought BN back to power by joining forces with PN.

However, BN and PN’s marriage was marred by constant quarrels that pushed BN’s Ismail Sabri and led to Saturday’s snap elections.