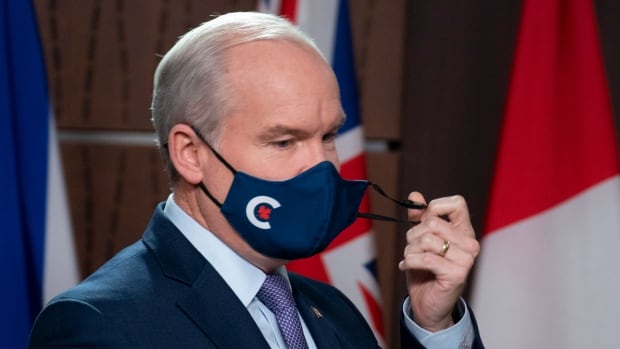 Conservative Leader Erin O’Toole declines to say how many of her MPs have been vaccinated against COVID-19, but promises anyone who attends the House of Commons in person will be fully vaccinated.

“I presented a plan and the caucus agreed to respect and abide by the new rules that require parliamentarians in the House of Commons … to be vaccinated,” O’Toole said earlier today after meeting caucus members.

The Conservative leader objected to the process used to establish the new rule, saying the issue should be resolved by the 338 elected MPs rather than a group of “seven MPs meeting in secret.”

O’Toole doubled down on that position today, saying “only the House of Commons itself can determine its makeup and conduct” and that his party would call for a vote on the new rules as soon as possible.

His party is likely to lose this vote. All the other parties represented in the House of Commons say they are in favor of the new rule.

O’Toole was repeatedly asked by reporters today if all Tory MPs had been vaccinated. He declined to answer, saying only that all Conservative MPs in the House of Commons will be vaccinated.

O’Toole said he was fully vaccinated and called on anyone who has not yet received both vaccines to get vaccinated as soon as possible.

“Justin Trudeau should, frankly, be ashamed of politicizing vaccines and dividing Canadians at the same time [when] we have to come together, ”he said.

O’Toole opposed to the Virtual House

The Conservative leader also dodged questions about whether Conservative MPs who do not attend the House in person because they are not vaccinated would instead participate in debates virtually.

MPs are soon to decide whether or not to continue with the hybrid parliament model, which sees some MPs participate virtually while others attend in person.

Watch: O’Toole discusses the mandatory vaccination policy for Members of Parliament in the House of Commons:

Conservative Party Leader Erin O’Toole said the party would raise a question of privilege over a vaccination mandate for MPs. 1:24

NDP Leader Jagmeet Singh said earlier today that he wants the Hybrid Parliament to continue – because of the threat the pandemic still poses and because it offers other benefits.

“I think the Hybrid Parliament has opened the door to greater participation,” he said. “It allows members of Parliament with perhaps young families, people who have other obligations, to be able to participate.”

Singh said the Conservatives’ internal debate on immunization “really shows that the official opposition … is focusing on itself, rather than being there for the people and fighting for the people.”

Ontario Conservative MP Scott Aitchison told reporters he was “doubly vaxed and thrilled to be.” His caucus colleague Ron Liepert, who represents a Calgary riding, said the issue is distracting the party from its job.

“We don’t have the luxury of sitting here as an opposition party and wondering whether we should be vaccinated or not,” he said. “We should do what the voters sent us here to do, and that is to hold his Liberal government to account.”

Liepert also said MPs have the right not to disclose their vaccination status, although he has no problem telling people he is fully vaccinated.

“It’s a bigger problem than just a problem for MPs,” he said. “There are Canadians who are at risk of losing their jobs because of vaccination warrants and I think that’s a concern. “