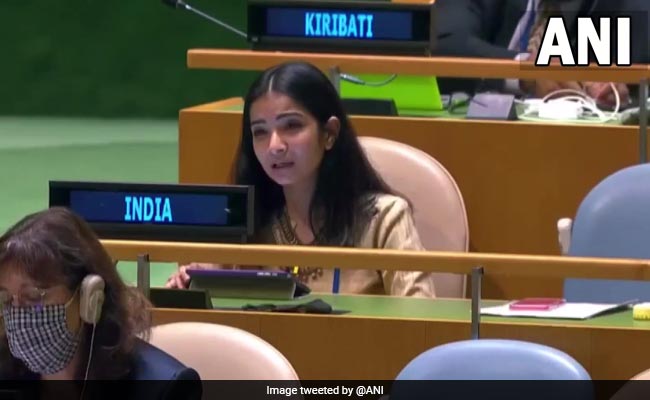 Exercising its right of reply to Imran Khan’s statements at the United Nations General Assembly, India said Pakistan has an established history and policy of hosting, assisting and actively supporting terrorists. “Pakistan holds the despicable record of harboring the largest number of terrorists banned by the United Nations Security Council. Osama Bin Laden has found refuge in Pakistan. Friday.

Pakistan is an “arsonist” disguised as a “firefighter,” and the whole world has suffered because of its policies as the country feeds terrorists in its backyard, she said.

Unfortunately, this is not the first time that the Pakistani leader has abused UN-provided platforms to spread false and malicious propaganda against my country, and has sought in vain to distract the world’s attention from the dismal state. of his country where terrorists are free to pass while the lives of ordinary people, especially those belonging to minority communities, are turned upside down. “

“Member States are aware that Pakistan has an established history and policy of hosting, assisting and actively supporting terrorists. It is a country that has been recognized worldwide as a country that openly supports, trains, finances and arms terrorists as part of state policy. It holds the despicable record of hosting the largest number of terrorists proscribed by the UN Security Council, ”added Ms. Dubey.

Ms. Dubey also said that unlike Pakistan, India is a country with free media and independent justice that monitors and protects our Constitution.

“Pluralism is a very difficult concept for Pakistan to understand which constitutionally prohibits its minorities from aspiring to high office. The least they can do is do some soul-searching before exposing themselves to ridicule. the world stage, ”Dubey added.

India also strongly reaffirmed that all of the Union Territories of Jammu and Kashmir and Ladakh “were, are and always will be an integral and inalienable part of India”. “This includes the areas which are under the illegal occupation of Pakistan. We call on Pakistan to immediately evacuate all the areas under its illegal occupation,” he said.

Imran Khan in his speech referred to the Indian government’s decision of August 5, 2019 on the repeal of article 370 as well as the death of pro-Pakistani separatist leader Syed Ali Shah Geelani.

With contributions from agencies

COVID-19: Mumbai local trains will run at 100% capacity from THIS date

Some parts of Gurugram will face a water shortage these days – Check sectors, areas here