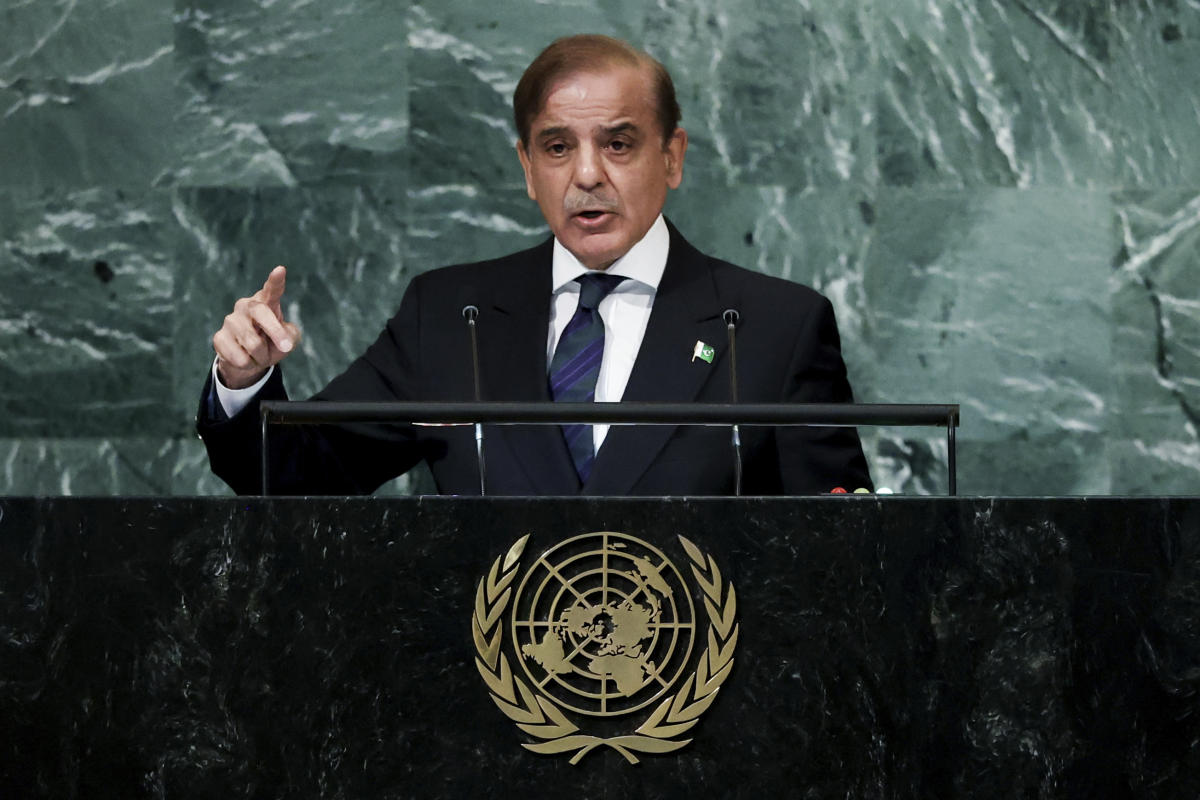 UNITED NATIONS (TBEN) – Prime Minister Shahbaz Sharif called for a peaceful end to the dispute over Kashmir and lamented regional instability, citing the perennial themes of Pakistan’s UN speeches after devoting the first half of his speech on Friday to the devastation of recent floods.

The devastation caused by the floods, which Sharif described in biblical terms, means Pakistan’s job is to “ensure rapid economic growth and lift millions out of poverty and hunger,” he said.

But to do this, Sharif said, Pakistan needs a “stable external environment” — that means peace in South Asia, which he said depends on a resolution of the decades-long dispute over Jammu and Kashmir.

“At the heart of this long-standing dispute is the denial of the Kashmir people’s inalienable right to self-determination,” said Sharif, describing what he called India’s “ruthless campaign of oppression” and “serious brutalization” of Kashmiris.

Kashmir is divided between India and Pakistan and has been claimed by both since they gained independence from the British Empire 75 years ago.

India — having said Kashmir is an internal matter and a matter of law and order — will speak at the General Assembly on Saturday. Rights groups have accused Indian Prime Minister Narendra Modi’s ruling party of looking the other way and sometimes allowing hate speech against Muslims. Modi’s party denies the allegations, but Indian Muslims say attacks on them and their faith have intensified.

Sharif also spoke at length about regional instability and terrorism – of which he called Pakistan “the main victim”.

He was a clear contrast to his flashy but conservative predecessor, Imran Khan, who devoted much of last year’s speech to accusing the United States of victimizing Pakistan. Khan was ousted in April after losing a vote of no confidence.

Dressed in a sober suit instead of Khan’s favorite cardigan-salwar-kameez combination, Sharif never once called the United States by name.

He was passionate, sometimes tapping the stage vigorously or demonstratively clenching his fists, but his words struck in a less combative tone.

“Pakistan is a partner for peace,” Sharif said before stepping down on prepared remarks: “But Mr. President, peace can only be secured and guaranteed if the rights of communities that have suffered and been subjugated for decades deserve their freedom and are respected.”

Sharif’s speech also marked a departure from last year, when Khan expressed optimism about the then-starting Taliban rule in Afghanistan and urged the General Assembly not to isolate the new government. A year later, no UN member state has recognized the Taliban government.

“Pakistan would also like to see an Afghanistan that is at peace with itself and the world, and that respects and nurtures all its citizens regardless of gender, ethnicity and religion,” he said, avoiding direct mention of his current government.

Above all, he echoed a fear common to countries that typically do not dominate the global discourse: “My real concern is about the next stage of this challenge, when the cameras would have gone or left this August meeting and the story just shifts into conflicts like Ukraine,” he said of the flood recovery. “My question is, will we be left alone, high and dry?”

Huge power crisis in Bangladesh: know how a power outage left 130 million people in the dark

Can Biden Save Democracy One U.S. Factory Job at a Time?