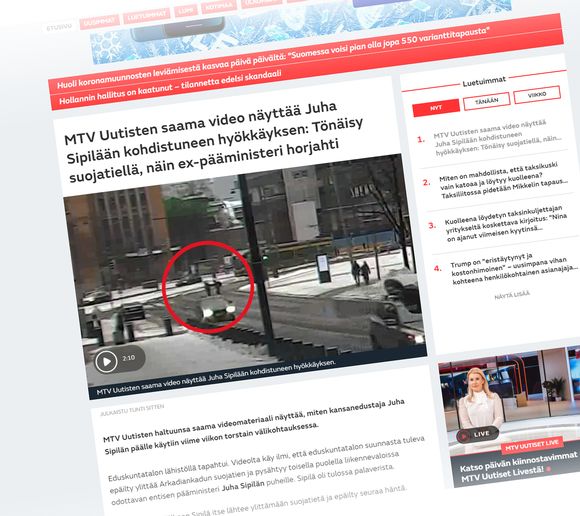 Parliament completed an investigation and released a report on the matter on Tuesday.

In the report, the Director of Parliament Security Jukka Savola confirmed that the recordings of the incident were captured by the building’s security surveillance camera system and that he released the footage to the media.

The footage was released by commercial broadcaster MTV on January 15.

The alleged assault took place on January 7 when a passerby approached MP Sipilä – who had also served as prime minister – as he was crossing the street near the Parliament building. Police located the suspect during the preliminary investigation, but were unable to determine the motive for the alleged attack.

The case has since been sent to prosecutors for review.

Video footage obtained and released by MTV appears to show the suspect following Sipilä after an exchange of words and pushing him from behind.

At the time, the Parliamentary Secretary General Maija-Leena Paavola said the surveillance camera footage was, in principle, confidential material and that the Parliamentary Bureau wanted to determine “how it was possible” for the material to be leaked to the media.

Savola wanted to “calm the turmoil”

In the report, security director Savola explained that several media had requested to see footage of the incident from the surveillance camera recordings.

“According to the law on public access to information, as director of parliamentary security, I have the discretion to decide whether and to what extent confidential information may be disclosed,” he said. in the report.

Savola added that he had come to the conclusion that he could deliver the requested video footage as it did not endanger parliamentary security.

“I did this because it is common knowledge that there is camera surveillance in and around Parliament,” Savola said, adding that the video footage was taken in a public space and contained no intrusive information.

Savola also justified his decision by arguing that the publication of the material highlighted that this was an isolated event and not an attack on democracy or Parliament, adding that he wished to “calm down the unrest surrounding the issue “.

“For my part, I wanted to dispel the perception raised in the media that the events of the US Capitol could take place in Finland following this incident,” he said, referring to the storming of the Capitol building in Washington DC that occurred the day before the alleged attack on Sipilä.

Secretary General Paavola told Yle that she considered the release of the footage in this case “exceptional”.

“We have a clear line that camera recordings are, in principle, confidential. Savola himself has followed this line so far. His procedure differs from previous practice,” she said, but did not would not comment further on whether Savola will be penalized for his actions. .

“This will be decided by the Chancellery Committee. I will not comment on this at this stage. I thought it would be good if Jukka Savola was made aware of possible sanctions before giving the public an opinion on the matter. “, added Paavola.

The Parliament’s Chancellery Committee will meet next week to discuss possible sanctions.

Finland postpones elections to June due to worsening pandemic

Paper: Municipal elections will be postponed to June