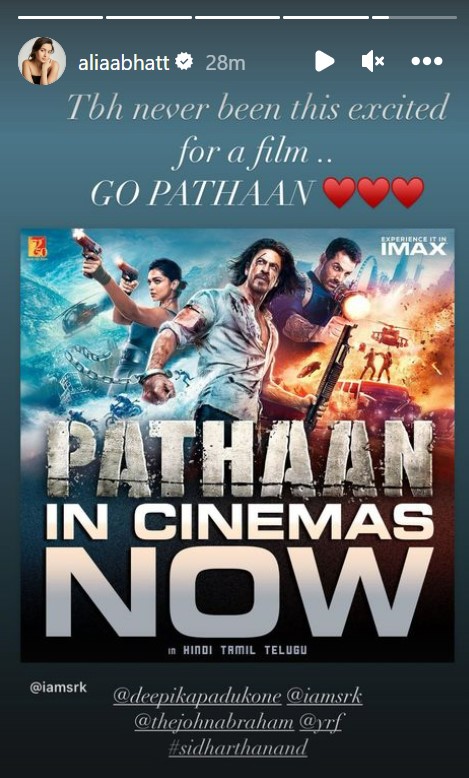 Starring Shah Rukh Khan, Deepika Padukone and John Abraham in the lead roles, Pathaan is finally released in cinemas on January 25. fans cheer with whistles and claps for the action-packed entertainer.

Pathaan marks Shah Rukh’s comeback to the big screen as the leading hero after more than four years since he last appeared in Aanand L Rai’s romantic drama Zero in December 2018. Millions of fans around the world and the stars too have waiting for the movie. in the Indian film industry.

Alia Bhatt, who starred alongside King Khan in the 2016 Gauri Shinde-directed coming-of-age drama Dear Zindagi, took to her Instagram Stories on Wednesday, shared the Pathaan poster and wrote, “Tbh (to be honest) was never been so excited for a movie…GO PATHAN” and added three red heart emojis.

Prabhas, who is rumored to be teaming up with Siddharth Anand for an upcoming big action movie and also sharing screen space with Deepika Padukone in Nag Ashwin’s upcoming film Project K, wished the entire Pathaan team ‘all the best’ for the film’s release on his Instagram Stories on Tuesday, January 24. 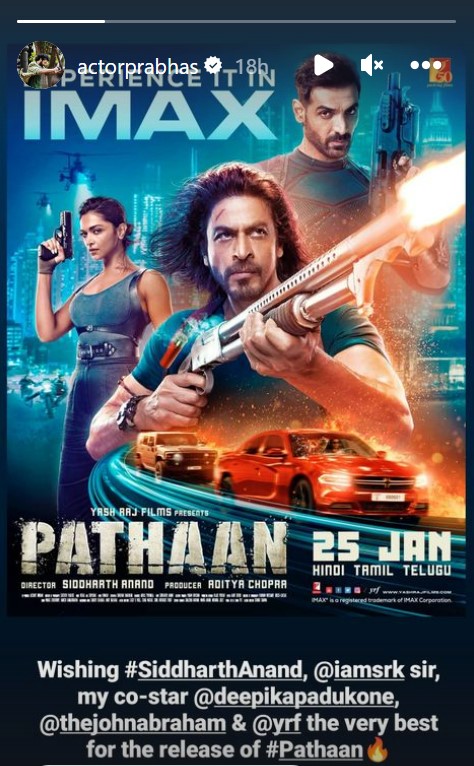 Anil Kapoor, who will star in Siddharth Anand’s next film Fighter starring Hrithik Roshan and Deepika Padukone, also shared his enthusiasm for Pathaan as he wrote, “Pathaan is not just a movie, it’s an emotion! @iamsrk @ deepikapadukone Looking forward to seeing #SiddharthAnand create magic on the big screen!” on his Instagram Stories on Wednesday. 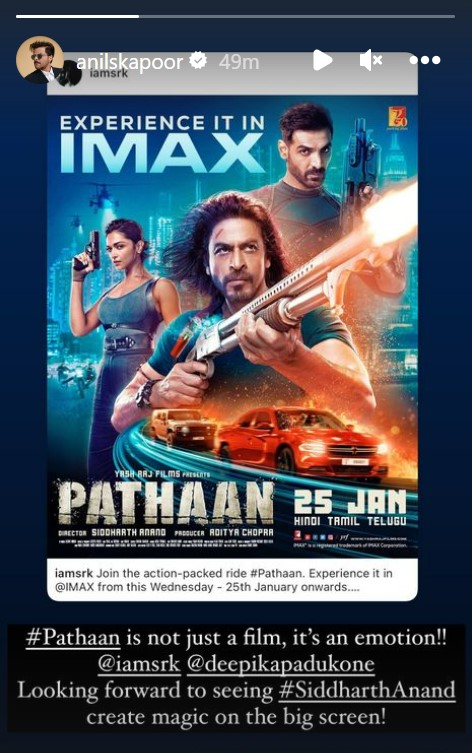 Pathaan is the seventh directorial film by Siddharth Anand. His first four films namely Salaam Namaste, Ta Ra Rum Pum, Bachna Ae Haseeno and Anjaana Anjaani were romantic comedies before turning to action genre with Bang Bang! and war. His next film Fighter will be released exactly one year later, on January 25, 2024.

READ | Pathaan movie review: Shah Rukh Khan the superstar is back to revive Bollywood in his most massive paisa vasool entertainer