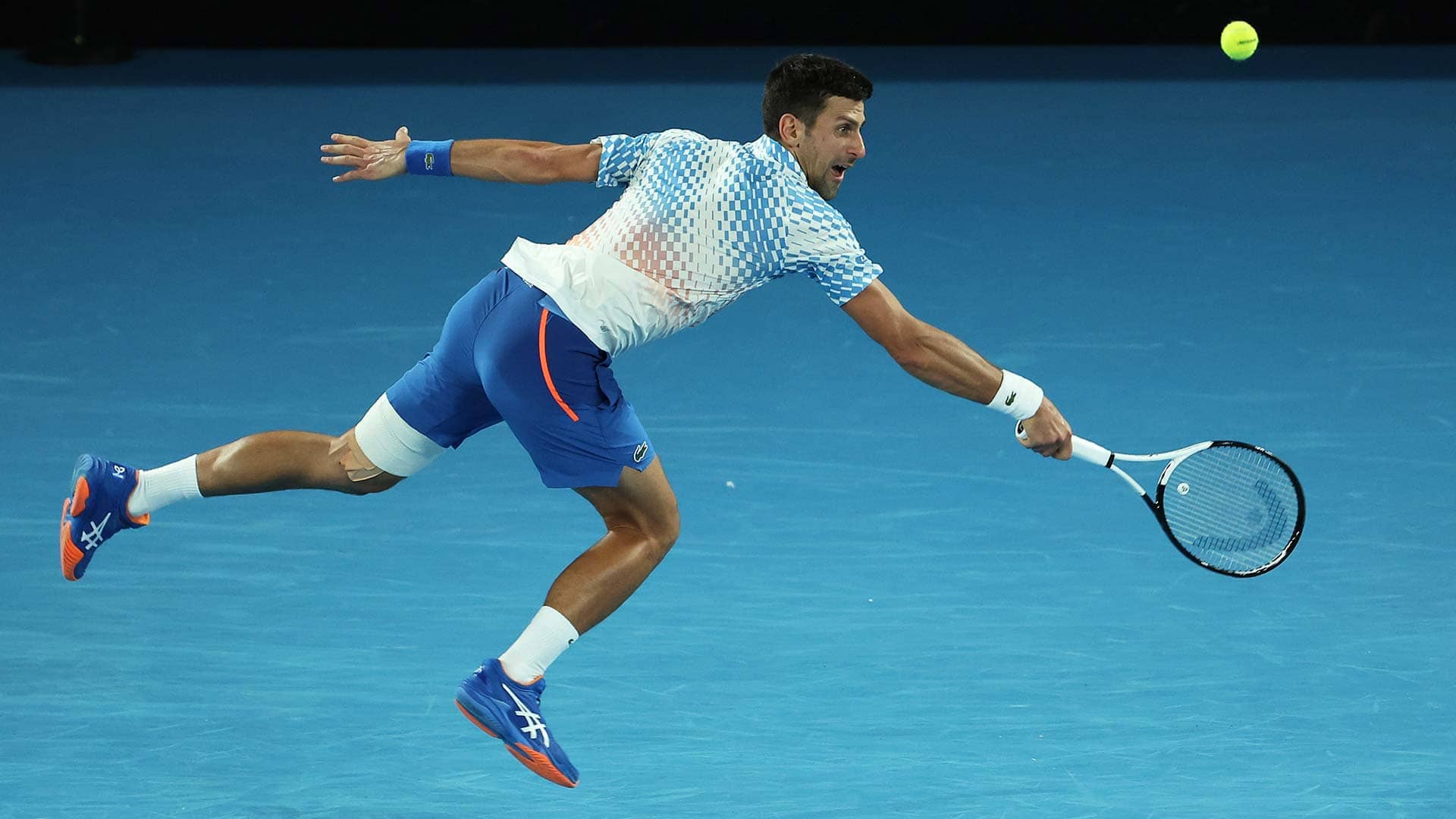 With Stefanos Tsitsipas and Karen Khachanov already through to the Australian Open semi-finals, four men will bid to join them from the bottom half of the draw at Melbourne Park on Wednesday.

Novak Djokovic continues his bid for a record-tying 22nd Grand Slam singles title when he takes on Andrey Rublev in the evening session after unseeded Americans Tommy Paul and Ben Shelton face off at Rod Laver Arena during the day.

Djokovic’s quest for a record-extending 10th Australian Open title has been far from smooth. Plagued with a left hamstring strain en route to the title at an ATP 250 in Adelaide in early January, the Serb struggled physically during wins against Enzo Couacaud and Grigor Dimitrov in Melbourne.

Despite concerns, the 35-year-old looked back at his best during his fourth-round victory against Alex de Minaur, moving freely as he dropped just five games to reach the quarter-finals.

“I always believe that I can push myself to the limit in my tennis. But the way my leg felt before tonight didn’t give me too much hope, so to speak, for the whole tournament, to go all the way through. Tonight I feel that, so I have a positive feeling about it,” Djokovic said after his victory over the Australian.

“I do not know [if it was the best] ever, but definitely the best tennis I’ve played this year, this tournament, so far this season.”

On the hunt for a record-breaking 22nd Grand Slam singles title, Djokovic now turns his attention to fifth seed Rublev. The fourth seed, who will rise to No. 1 in the Pepperstone ATP Rankings if he lifts the trophy in Melbourne, has a 2-1 lead in the ATP Head2Head series against the 25-year-old.

Rublev moves into the quarterfinals after a dramatic five-set win against Holger Rune. The world number 6 saved two match points against the #NextGenATP Dane and came from 2-5 in the decider to prevail.

“I’ve never been able to win games like this in my life,” said Rublev after the game. “This is the first time I’ve ever won something like this, especially in a very special tournament, the Australian Open, to be in the quarter-finals. So it’s something I’ll definitely remember all my life. I’m out of words for.” I’m shaking and I’m happy.”

When Rublev heads to the Rod Laver Arena on Wednesday night, he will aim for his first Grand Slam semifinal. The 12-time Tour-level title contender, who has a 0-6 record in major quarterfinals, knows what it takes to upset Djokovic.

“I know that Novak is especially a very difficult player to beat [at] the Slams,” Rublev said. “He has the best experience to win these kinds of matches. He is one of the best in history. The only chance I have is if I play my best tennis, just fight for every ball, and that’s it. That’s the only chance.”

Excited but not satisfied – that’s how Paul described his feelings after advancing to his first Grand Slam quarterfinal. The same can be said of Shelton, who first left the United States with no “expectations” for Australian swing.

Both men have a big chance against an unseeded opponent in the biggest game of any player’s career. Paul booked his place in the last eight with a four-set win against 24th seed Roberto Bautista Agut, while Shelton won his second five-set match of the tournament against compatriot JJ Wolf.

While it will be the pair’s first ATP Head2Head meeting, they have developed a relationship off the court, practicing together at last year’s US Open, where Shelton made his Grand Slam debut as a wild card, which he earned by winning the 2022 NCAA singles title. as a Florida gator.

“He’s one of the American guys who almost took me under their wing,” the 20-year-old said of Paul. “He’s kind of helped me navigate some of the early stages of a professional career. He’s been a great friend. I’m looking forward to playing him on a big stage like this.”

Shelton and Paul were joined in the quarterfinals by compatriot Korda, the first time since 2000 that three American men reached the last eight in Melbourne – and the first time at a Slam since the 2005 US Open. , 20-year-old Shelton is the first American man since Wimbledon in 2003 to reach a Grand Slam quarterfinal before turning 21.

Paul, 25, is happy to be part of the wave of success for his country: “We know there will be an American in the semi-finals, so I’m very excited about that,” he said.

The world number 35 reached the fourth round of Wimbledon last season for his previous best major result. He will try to lean on his experience and his returning ability to disarm his left-handed opponent’s greatest weapons: his serve and his forehand. But in terms of tactics, Paul still has some prep work to do before he takes the field against a new opponent.

“I would say I know him better as a person than as a player, just because I spent quite a bit of time in the dressing room with him,” Paul said of Shelton. “I know his father [former pro and current Florida head coach Bryan Shelton] from when his dad was on the USTA when I was younger.

“I haven’t actually seen him play much. This will probably be the first time I’ve had to see a movie of my opponent in this whole tournament so far. I’ll probably watch his match with JJ and talk to him.” my coach I think my coach saw him play a few times.

“We’re going to have to come up with a game plan.”

Top seeds Wesley Koolhof and Neal Skupski will continue their bid for a maiden Grand Slam title as a team when they play Australian wildcards Rinky Hijikata and Jason Kubler. The Dutch-British tandem, who won seven Tour-level prizes last season, put in a strong performance in Melbourne, dropping just one set en route to the quarter-finals.

Wednesday’s second doubles quarterfinals will see eighth seed Marcel Granollers and Horacio Zeballos face Andreas Mies and John Peers. Granollers and Zeballos aim to reach the semi-finals in Melbourne as a team for a second consecutive year, while Mies and Peers join forces in early 2023.