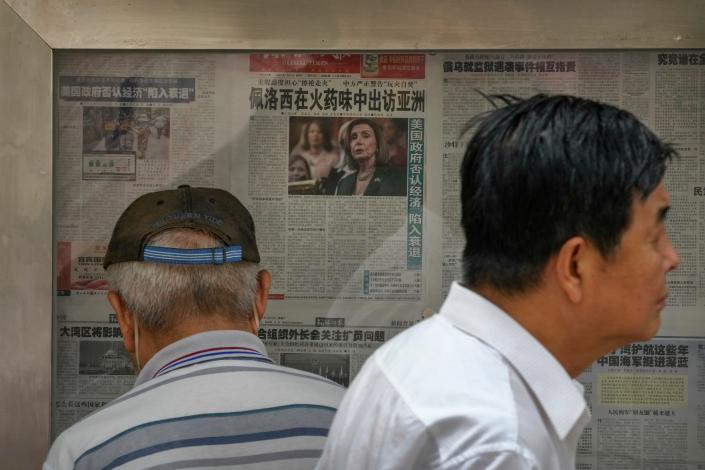 WASHINGTON — House Speaker Nancy Pelosi landed in Taiwan on Tuesday, a much-anticipated visit that came amid increasingly stern warnings of Chinese retaliation and escalating tensions between Washington and Beijing.

Pelosi, who was wearing a face mask, got off the plane around 10:50 PM local time and posed for photos with a contingent of Taiwanese officials greeting her on the tarmac.

In a statement, the California Democrat noted that her visit marked the first official trip to Taiwan by a US House speaker in 25 years.

“Our congressional delegation’s visit to Taiwan is a tribute to America’s unwavering commitment to support Taiwan’s vibrant democracy,” Pelosi said in the statement. “America’s solidarity with Taiwan’s 23 million people is more important today than ever as the world faces a choice between autocracy and democracy.”

China’s foreign ministry released a statement just minutes after she landed, denouncing her visit as “a serious violation” of the One-China principle, which states that Taiwan is part of China.

The statement accused the US of encouraging “separatist forces” in Taiwan and warned that Pelosi’s visit “has a serious impact on the political foundation of China-US relations and constitutes a serious breach of sovereignty and territorial integrity.” from China”.

“These moves, like playing with fire, are extremely dangerous,” he said.

Pelosi, who has a long record with Beijing on human rights, is the most senior US official to visit the self-governing island in 25 years.

A history with China: Why Nancy Pelosi is visiting Taiwan despite China’s threats and pleas from Biden

Pelosi’s office declined to confirm the trip in advance, citing security protocols, but her travel plans leaked amid rampant speculation about the ramifications of such a visit. Even after she landed, her office did not release an official itinerary for her stay in Taiwan. But Taiwan’s three largest national newspapers, citing unidentified sources, said she would spend the night there.

ALSO READ  'We need a change maker': Dems want more from Biden on abortion and climate

Taiwan’s tallest building, Taipei 101, was lit with welcome messages for the speaker. “Welcome to TW,” one message said. “Thanks,” read another.

Last month, President Joe Biden told reporters that “the military thinks it’s not a good idea right now” for Pelosi to make the trip. Some in Washington have expressed concern that China could respond by ramping up aggression against Taiwan.

“The response will almost certainly contain a military component,” M. Taylor Fravel, director of the Security Studies Program at the Massachusetts Institute of Technology, wrote in a thread on Twitter. He said China is likely to put on a “display of strength”, possibly including live fire drills and an increased military presence in the Taiwan Strait, along with economic and diplomatic actions against the island.

China considers Taiwan part of its territory, while Taiwan sees itself as a sovereign country. The US has long embraced a dark middle ground that aims to support Taiwan without enraging Beijing.

In an op-ed published in The Washington Post after her arrival, Pelosi said her journey should be seen as “an unequivocal statement that America stands behind Taiwan, our democratic partner, as it defends itself and its freedom.”

“By traveling to Taiwan, we honor our commitment to democracy: reaffirming that the freedoms of Taiwan – and all democracies – must be respected,” she wrote.

Pelosi noted that her visit was one of many congressional delegations to Taiwan and said that “it in no way contradicts long-standing United States policies.”

White House officials also made that point, stressing that Pelosi’s trip does not change the US stance on Taiwan and saying there is no reason for the visit to cause any escalation.

“Nothing about this potential visit would change the status quo, and the world would reject any (Chinese) attempt to use it,” said John Kirby, the National Security Council’s coordinator for strategic communications at the White House. “We will not take the bait or engage in saber rattling.”

Kirby noted that other members of Congress have visited Taiwan before, including earlier this year. Former Speaker Newt Gingrich, R-Ga., was the last House leader to visit in 1997.

More than two dozen Republicans in the Senate issued a joint statement after Pelosi’s arrival in Taiwan expressing support for her visit.

“This trip is in line with the United States’ One China policy to which we are committed,” they said.

Despite the government’s insistence that the visit will not change US policy, China has threatened repercussions on Pelosi’s visit.

In Tuesday’s statement, China’s Foreign Ministry said Beijing “will certainly take all necessary measures to resolutely protect its sovereignty and territorial integrity in response to the US speaker’s visit.” Any ramifications of those steps “must be borne by the US and the separatist forces of Taiwan’s independence,” the statement said.

Chinese President Xi Jinping directly warned Biden about the issue during a lengthy phone call on July 28 between the two leaders.

“Those who play with fire will die,” the Chinese leader said, according to the official record of the Beijing meeting. “It is hoped that the US will be clear about this. The US must respect the One China principle,” the Chinese government statement said.

US officials have called such comments escalating.

Pelosi’s visit to Taiwan comes as part of a conference delegation to Singapore, Malaysia, South Korea and Japan.

Democratic delegates Gregory Meeks from New York, Mark Takano from California, Suzan DelBene from Washington, Raja Krishnamoorthi from Illinois and Andy Kim from New Jersey traveled with Pelosi. It was not immediately clear whether those lawmakers were also going to Taiwan.

The California Democrat also invited several Republican members of Congress to travel with her to Taiwan, according to a source familiar with the discussions and one of the GOP lawmakers, but none of the GOP members attended.

Rep. Michael McCaul, R-Tx., was one of those invited on the trip, but he was unable to attend due to a prior commitment, said Leslie Shedd, a spokesperson for the House Foreign Affairs Committee rankings member.

House Minority Leader Kevin McCarthy, R-Calif., and Senate Leader Mitch McConnell, R-Ky., said before the trip that if Pelosi was not present, it would be a win for China.

Biden is building a big, beautiful $500,000 security wall around his house with your money

Under Virat, Kohli took India Test Cricket seriously; In the...