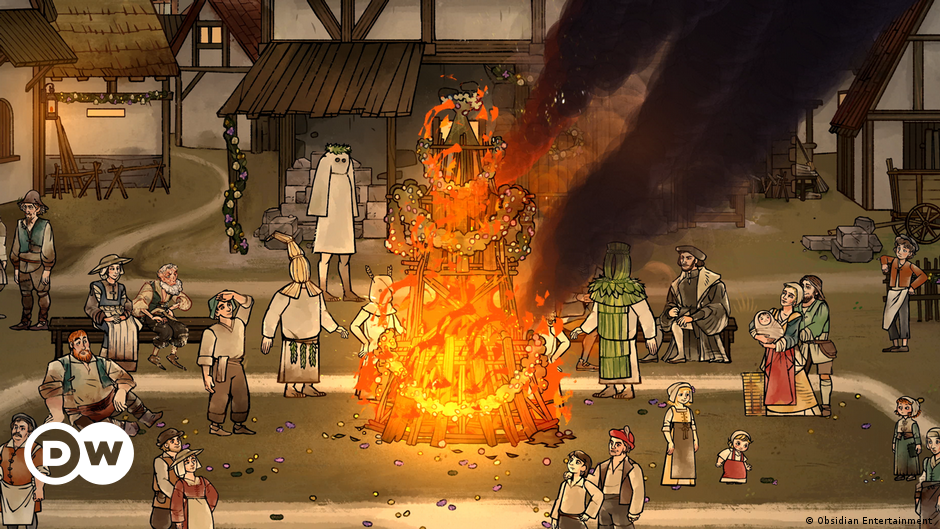 The year is 1518, and as players of the recently released video game “Pentiment”, we find ourselves in the role of Andreas Maler, a painting journeyman who is the main character. The young man lives with a farming family in the fictional Bavarian town of Tassing and works in the scriptorium of the nearby Kiersau Abbey. It is one of the few monastic scriptoria where letters are still being written and books are copied by hand more than half a century after the invention of the printing press.

Andreas spends every free minute working on his masterpiece, an illustrated calendar page. When that is over and he is married, he can finally become master. But things don’t go as planned.

A nobleman who visited the abbey is found dead in the monastery.

Andreas’ friend, Brother Pietro, is accused of murder. Since Andreas is firmly convinced of the old monk’s innocence, he sets out to solve the case himself. It soon turns out that the nobleman had many enemies, which does not make the search for the killer in the video game any easier.

“Pentiment” is an interactive medieval thriller where players must read lines of text and make decisions that significantly affect the story they experience. The video game plot spans 25 years.

Travel back to the 16th century

From the very beginning it is clear that there is tension between the clergy, the nobles, the peasants, artisans and the rest of the townspeople. The peasants toil and have to pay high taxes to the monastery.

Social conflicts run through the plot of the interactive game, which was created based on historical peasant uprisings and wars in southern Germany in the early 16th century.

As a result, the game is a lovingly crafted journey through time, allowing players to participate in the daily lives of the townsfolk and clergy.

Every decision changes the story

“Pentiment” is not very demanding in terms of gameplay; straining your hands on the gamepad or mouse and keyboard is virtually impossible. The game focuses entirely on the conversations between Andreas Maler and the many people he meets.

The typography accompanying each character’s text reveals information about their social status, education level, and their emotions, helping players learn what life was like during this time period.

The fact that there are so many characters makes the virtual world come to life and creates many subplots for players to explore. While the town and monastery are fictional, players can easily feel like they’ve been transported to that time and place, the game’s director Josh Sawyer told TBEN in an interview at Gamescom this summer.

Sawyer, who is from the US, studied history and is of German descent: members of his family emigrated to the US in the mid-19th century.

The documents Andreas Maler found in the game are also written in German – or in Latin in the international versions, which was common at the time.

The Christian religion and the great political and economic influence of the church and nobility are also omnipresent. The social constraints that restrict men and women of all classes and their consequences – which can sometimes lead to anger – run like a thread through the game’s plot.

‘Pentiment’ is an interactive thriller

The game has a tension arc, but allows the players to travel through the world at their own pace and without time pressure. It’s up to them who they want to talk to and how they want to behave towards the other characters.

The game thus fits into the long tradition of so-called “cozy mysteries” – a subgenre of crime fiction where typically one murder takes place in a small community, and an amateur detective has many conversations with witnesses and suspects to try and solve the case. crime.

The “Cadfael Chronicles” series was a major inspiration for the development team at Obsidian Entertainment, which was responsible for “Pentiment,” according to developer Josh Sawyer.

British mystery writer and linguist Edith Mary Pargeter (1913-1995) wrote numerous novels under the pseudonym Ellis Peters. The stories revolve around the 12th century Benedictine monk and amateur detective Brother Cadfael and have been translated into many languages.

They were made into movies in the mid-1990s and helped popularize the historical cozy mystery genre.

Other sources of inspiration for the game were the travel diaries of German artist Albrecht Dürer, contemporary biographies of an executioner, a farmer and a miller, and Umberto Eco’s novel “The Name of the Rose”.

It is clear that “Pentiment” could never have been developed without the influence of literature, but the game itself is a declaration of love to the written word. The monastery library and modern printing process are central to the plot. Visually, the game remains within the tradition of medieval handwriting and art.

For a game where players only have to press two buttons, playing “Pentiment” takes a significant amount of time – about 20 hours. Still, the fact that each dialogue changes the main character’s relationship with the characters, which can have dramatic consequences, keeps the story interesting. The game portrays a world in motion and challenges players. There are no right or wrong choices in this. Instead, players must rely on their own moral judgment.