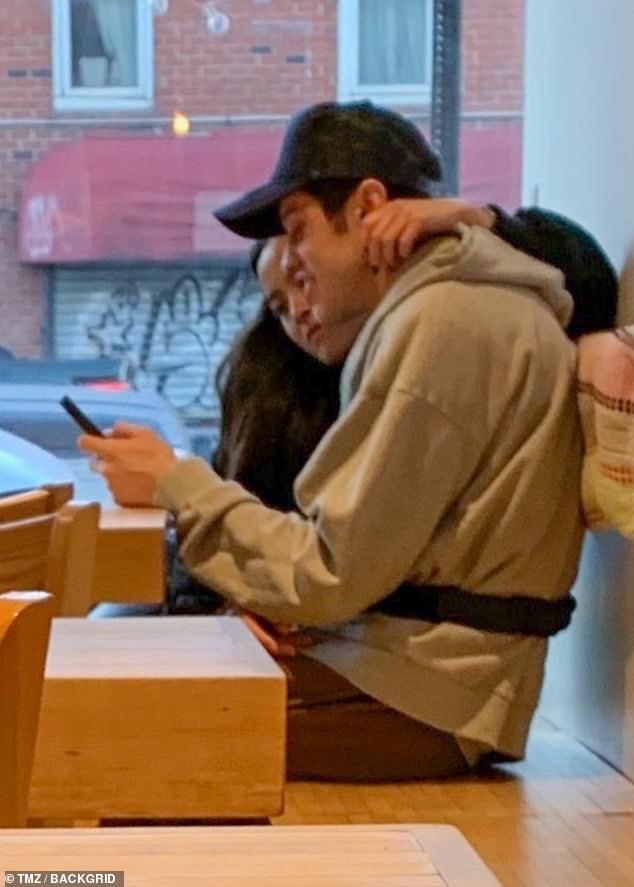 Pete Davidson and Chase Sui Wonders continued to spark dating rumors on Monday, when they were spotted getting close at Baba’s Pierogies in Brooklyn, New York.

The former SNL Funnyman, 29, and his Bodies Bodies Bodies co-star, 26, waited for their takeout, according to TMZ, as Chase lovingly put her arm around the comedian’s neck as he showed her something on his phone.

According to the outlet, patrons of the Eastern European restaurant reported that the pair “shared a kiss and some serious cuddles” before taking off in the same car. The observation comes after Pete’s rep said via TMZ that the actors are “good friends.”

Close: Pete Davidson and Chase Sui Wonders continued to fuel dating rumors on Monday, when they were spotted sharing a hug at Baba’s Pierogies in Brooklyn, New York

Kim Kardashian’s ex-boyfriend wore a casual outfit for the outing, a gray hoodie and a dark baseball cap.

Meanwhile, Chase wore a black top and her black locks fell over her shoulders.

The actress wore black sunglasses as an accessory. 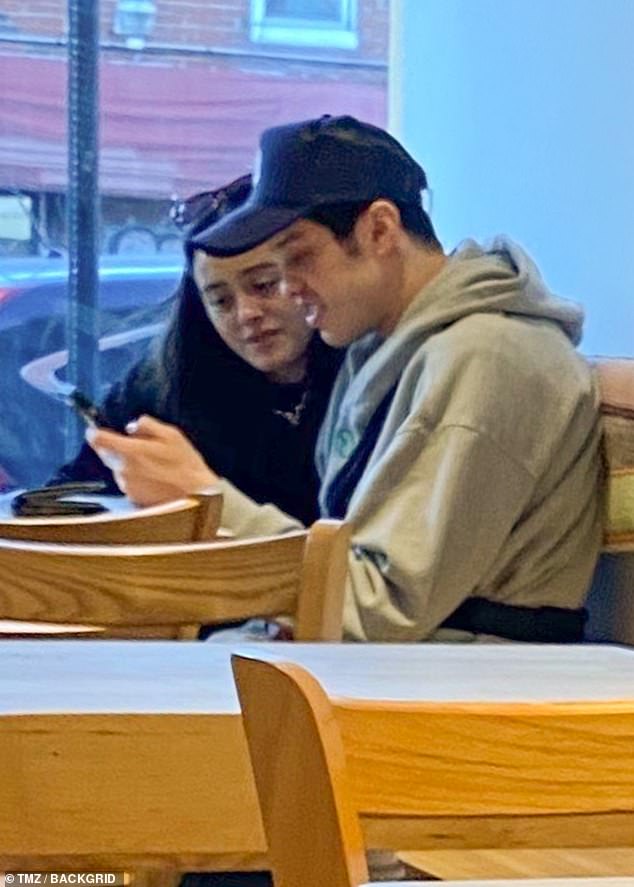 Affectionate: The former SNL star, 29, and his Bodies Bodies Bodies co-star, 26, waited for their takeaway, with Chase lovingly keeping her arm around the comedian as he showed her something on his phone

More than friends? Patrons at the restaurant reported that the pair “shared a kiss and some serious cuddles” before taking off in the same car

Davidson has been spotted with his on-screen love on three separate previous occasions.

Last month, the duo were spotted arriving together at his New York City apartment, and they stayed close as they chatted outside while Pete checked his phone.

That same month, they were also spotted at a hockey game between the New York Rangers and the Toronto Maple Leafs. 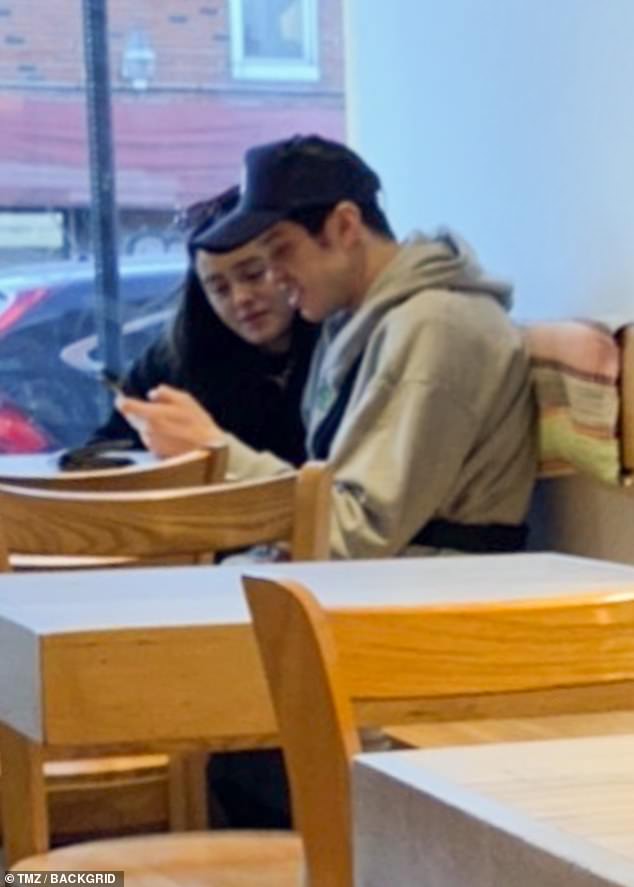 Interestingly, the sighting comes after Pete’s rep said via TMZ that the actors are “good friends.” 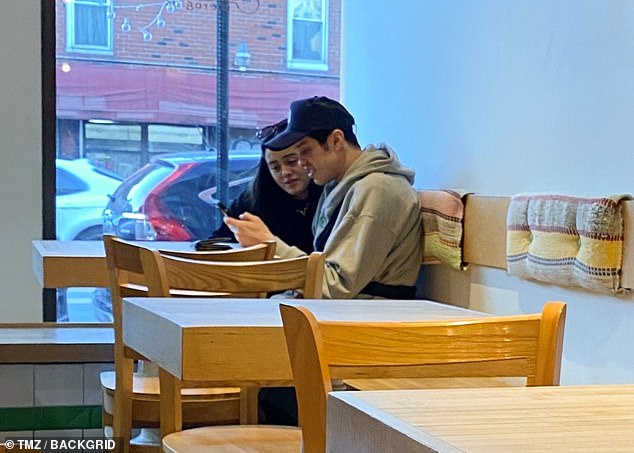 Casual: Kim Kardashian’s ex-boyfriend wore a casual outfit for the outing, sporting a gray hoodie and a dark baseball cap 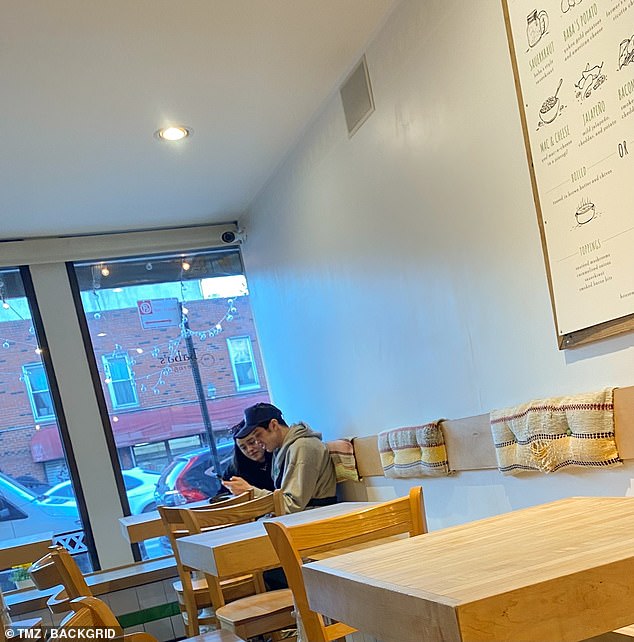 Spending time together: Davidson has been spotted with his on-screen love three times before last month

They were later seen at a Whole Foods in Brooklyn, New York, shopping together. The exchanged ‘smiles at checkout’ as they chatted in line at the register.

Davidson and Sui Wonders played boyfriend and girlfriend in the A24 thriller Bodies Bodies Bodies, which debuted at the South by Southwest festival before hitting theaters in August.

In October, it was reported that the actors have reunited with Chase joining the cast of Pete’s new Peacock series Bupkis.

The series has been described as a “fictionalized, elevated version of Davidson’s own life,” though it’s unclear what role Chase may play. 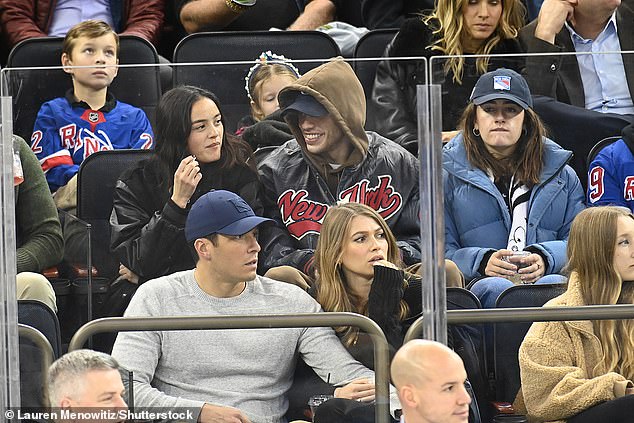 Hanging Out: Last month, they were seen enjoying a hockey game of the New York Rangers against the Toronto Maple Leafs

Responding to recent speculation that they might be dating, Pete’s rep told TMZ that they’re just “good friends” and that they’ve been “ever since they met while filming Bodies Bodies Bodies.”

A native of Detroit, Chase is a Harvard alum who wrote for the prestigious college humor publication The Harvard Lampoon.

The actress also starred in Neil LaBute’s Out of the Blue earlier this year and was first seen with Riverdale star Charles Melton in March.

The couple became “Instagram-official” in July, and Melton shared a beachside photo with Sui Wonders in late September, though it’s unclear if they’re still together.

Pete was last linked to model Emily Ratajkowski, 31, before being in a nine-month relationship with Kim Kardashian, 42.

Pete and Ratajkowski were first rumored to be dating in November last year when they were spotted at a dinner party in New York City.

But after a few weeks, a source told Page Six, “Their fling has moved to the friend zone [and that’s] fine with both.’ 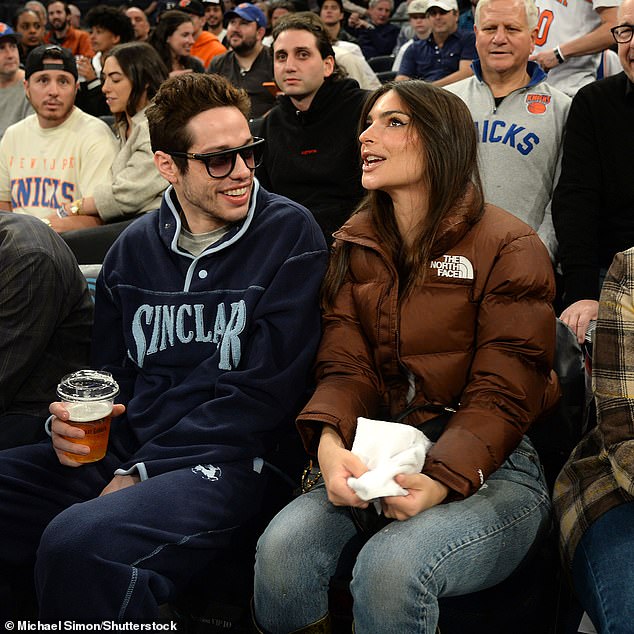 Recent fling: Pete was last linked to model Emily Ratajkowski, 31, but after a few weeks their romance reportedly fizzled out in the friend zone; Pictured November 2022

Emily was last seen on a romantic date with comedian Eric Andre, as they strolled through the Big Apple with their arms wrapped around each other.

Prior to that, the Blurred Lines star – who recently shared that she thinks she “attracts the baddest men” – was also spotted on another date with DJ Orazio Rispo, and in December she was spotted kissing recording artist Jack Greer.

Meanwhile, Davidson and Kardashian were first linked in the fall of 2021 after appearing together on SNL, and then they were spotted out for a ride at Knott’s Berry Farm in Buena Park, California. 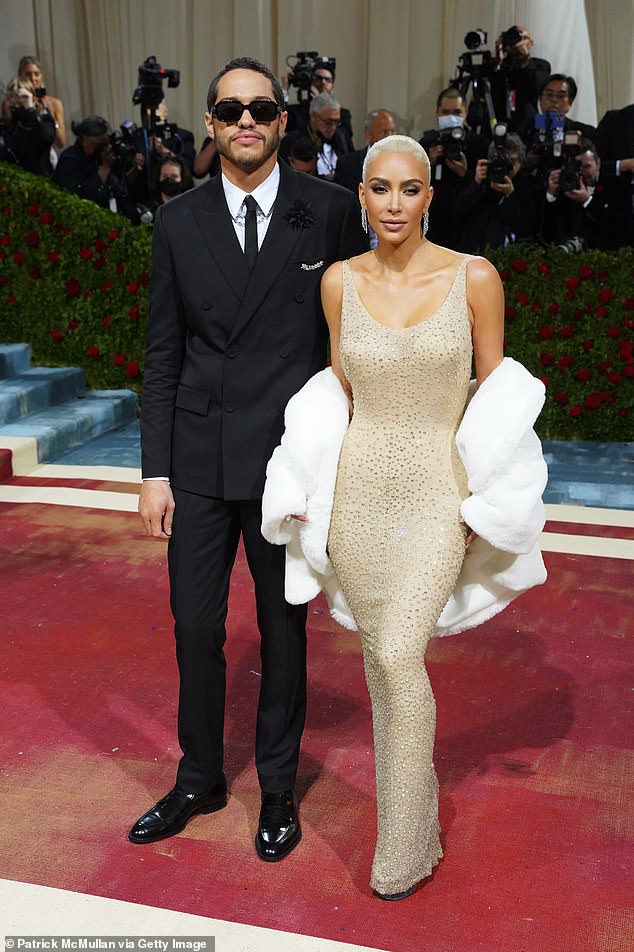 The ex factor: Prior to that, he was in a nine-month relationship with Kim Kardashian, 42; Pictured at the 2022 MET Gala in New York

AFL 2023: Brent Guerra puts his Highett, Melbourne, up for auction