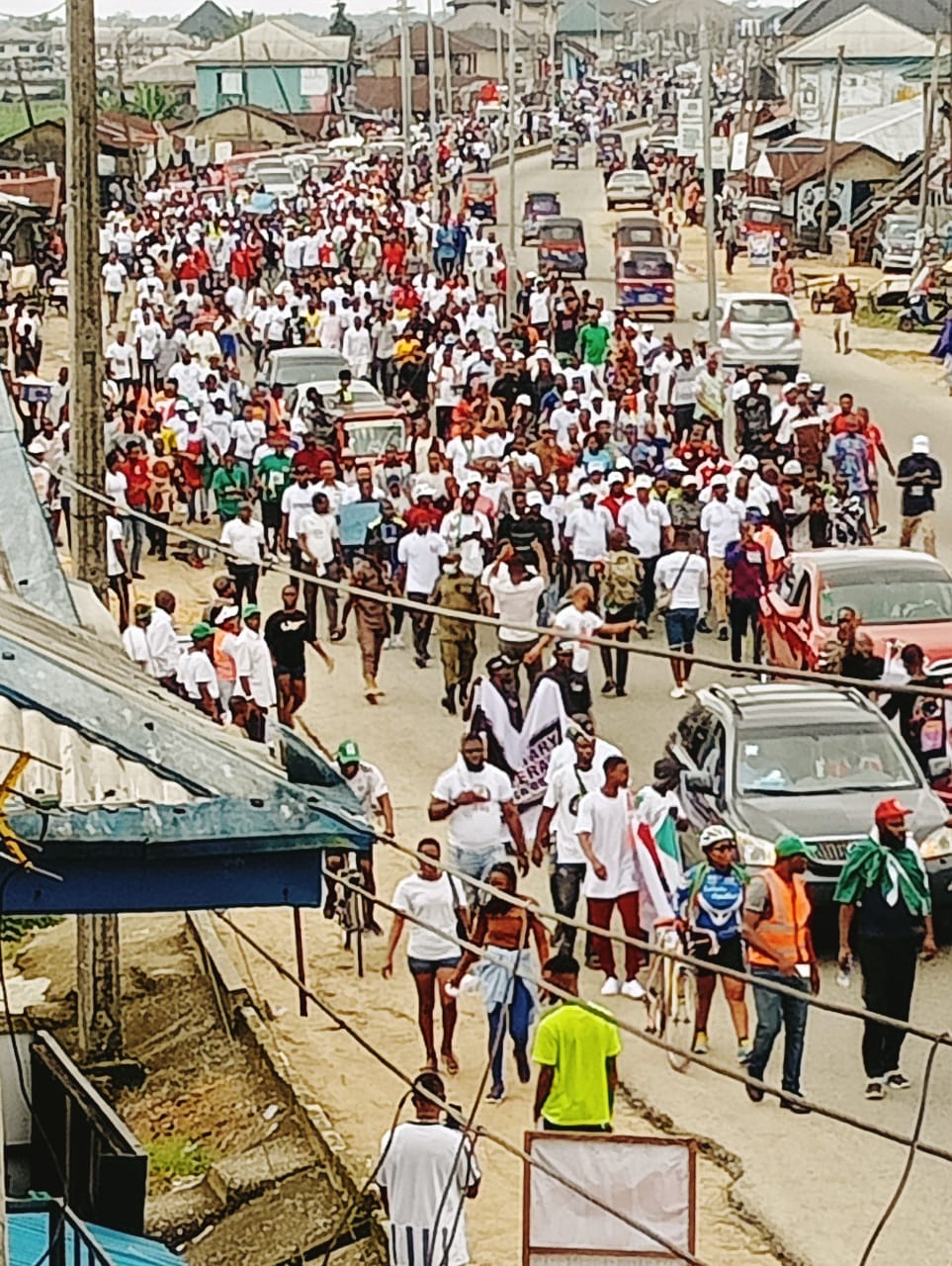 A coalition of Labor Party supporters and stakeholders (LP) presidential candidate, Mr. Peter Obi, grounded Yenagoa, the capital of Bayelsa state, on Saturday as they embarked on a one-million-man march across the state.

The crowd, which marched from Tombia Junction on their way to Mbiama Yenagoa road and ended at Ox-bow Lake, were marked with signs with various inscriptions.

By 8 a.m., traffic from the state entrance had already come to a halt as youths, women and men gathered to follow instructions before starting the rally.

Speaking to DAILY POST, Concern Medical Practitioners coordinator, Dr. Frank Ogunuawe, that they all support Peter Obi, who they described as the most credible and prepared man for the job, adding that the medical profession in the country is collapsing.

He stressed that the number of industry professionals leaving the country to work outside the country’s shores is quite threatening, while the few in the country plan to go on strike due to some unresolved issues between them and the government. .

He added: “Imagine what will happen to most of the people who are ill from the suffering inflicted on them by the hardships in the country; we should also not forget that students of higher institutions have been on strike for the past seven months, so it is time to stop the nonsense in the country by voting for a sincere person.” 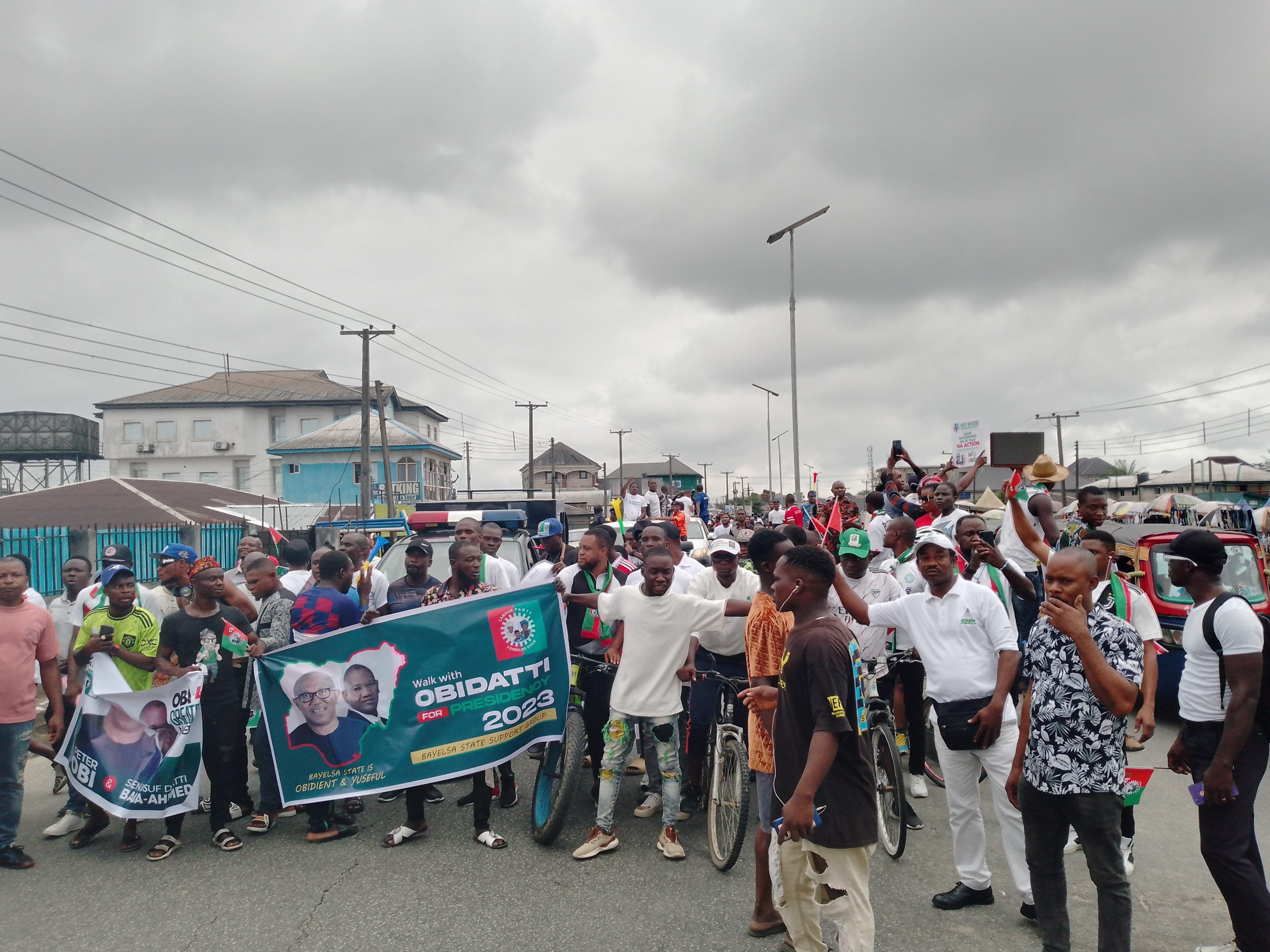 Bayelsa West LP coordinator, Hon. Chris Ogosi, stated that the party’s structure is the hungry, crying, suffering mass of the country and with the masses the dream of a better Nigeria is achievable.

“We all know that a man’s greatness is measured by the wisdom he has and not the amount of money and Obi is the man we know built a better Nigeria among all who have expressed an interest.”

The Vice-Chairman of the Coalition of All Groups, Dr. Charles Oyibo, noted that what is happening on the streets of Yenagoa today is to organize and sensitize the people about the need to take back Nigeria.

“We are with the people and they are all out due to the fact that they are sick of what the current system is giving to the people; look at the poverty level, government insensitivity, deprivation and the fact that our children are at home while theirs are abroad. This is not about a political party, but a movement to take back the land and give it to its rightful owners who are the masses. This is a clear confirmation that the people are so tired, that’s why today we see this crowd that doesn’t even get paid. Each body came on the basis of their own conviction that it is time to do the necessary.” 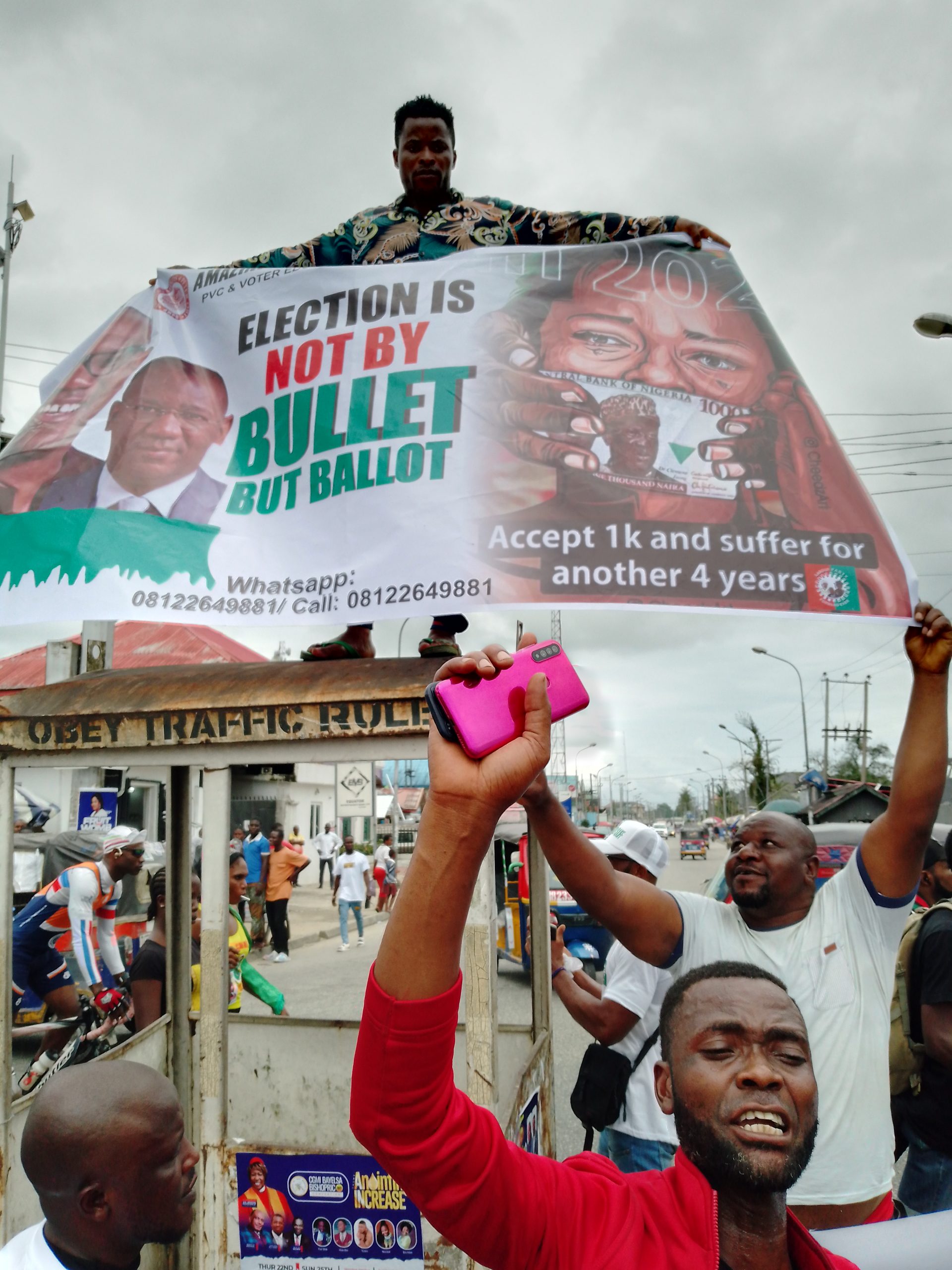 The president of the state, Mr Eniye Zidougha, addressing the crowd, said we have seen other states carry out their demonstration and what they are doing today is no different, adding that the people’s cry about insecurity, poverty, lack of power , ASUU strike and other government failures is the reason for the march.

He said the Obi movement became important in saving the already mortgaged future of the citizens, adding that the people with their voter cards will vote their conscience in the upcoming elections. 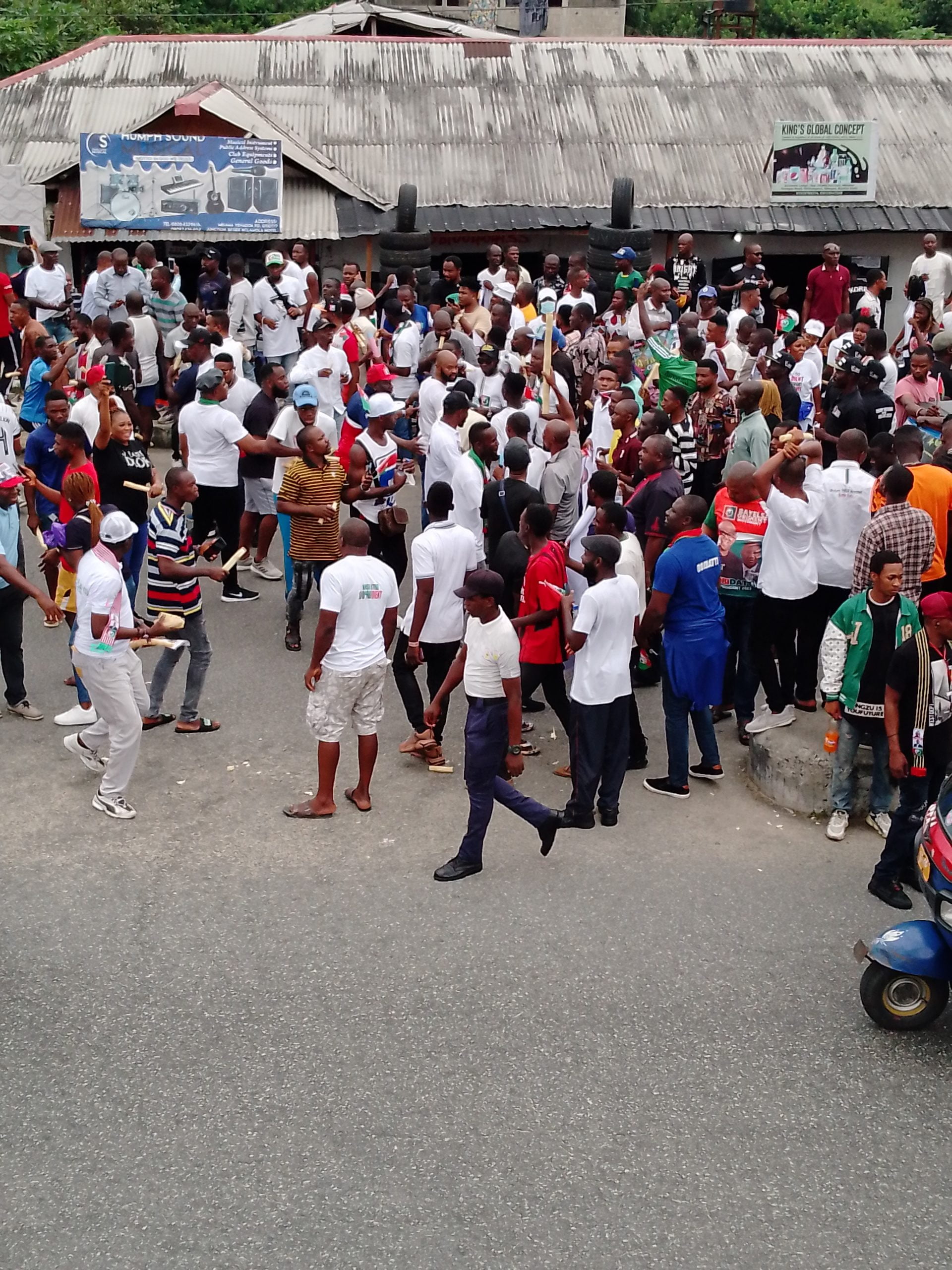 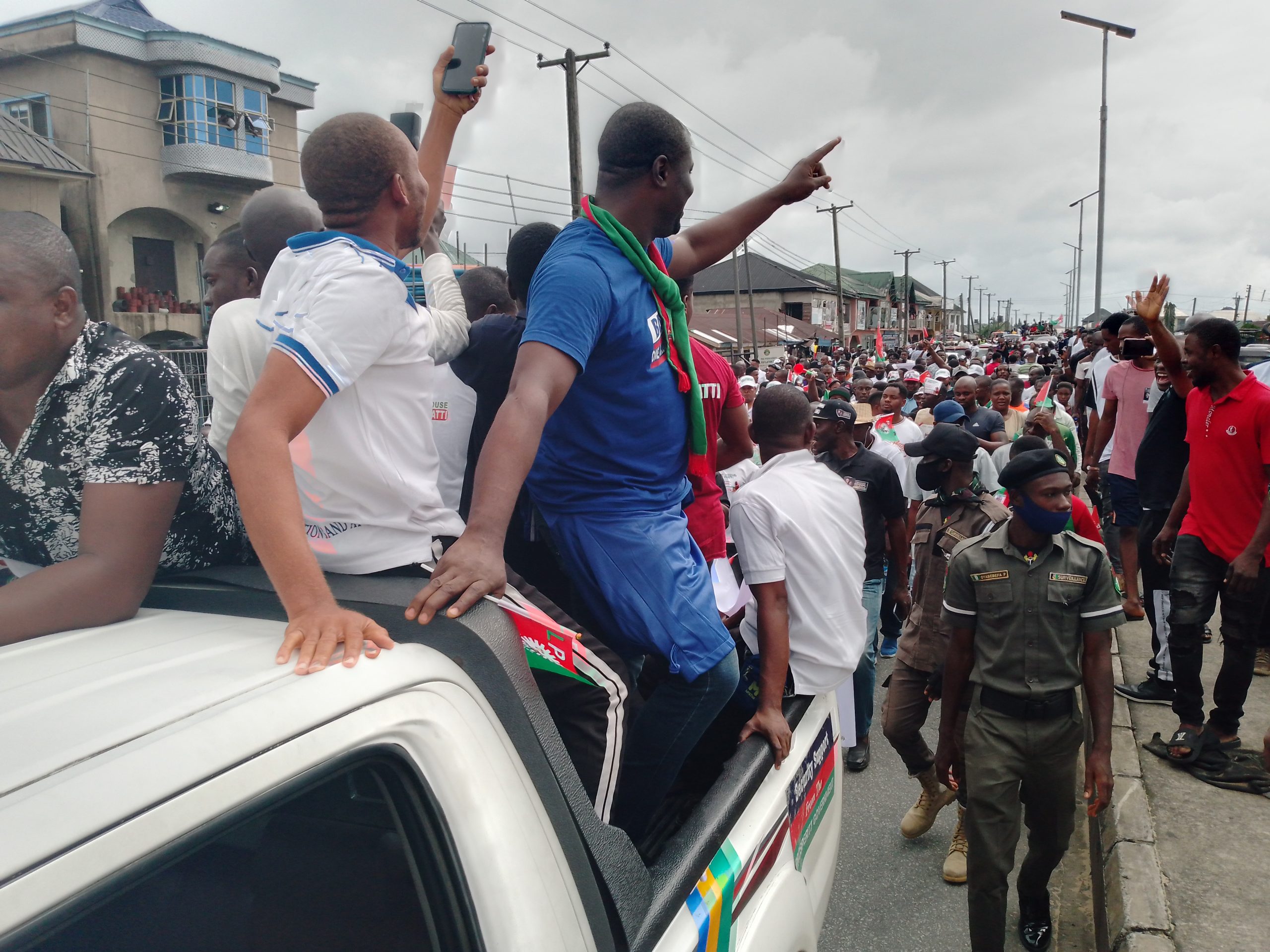 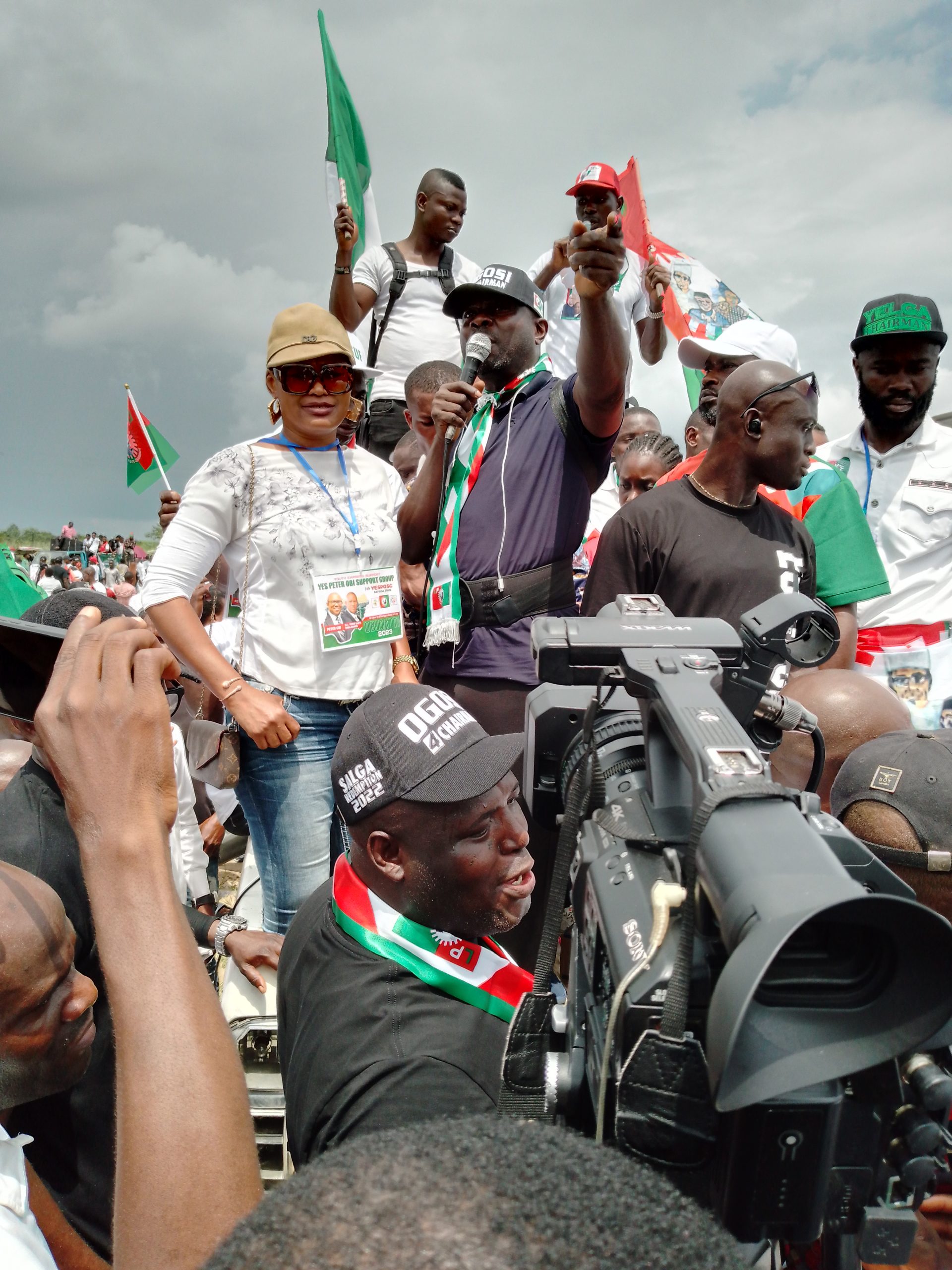 Osun Guber: Tight security as the tribunal begins to sit