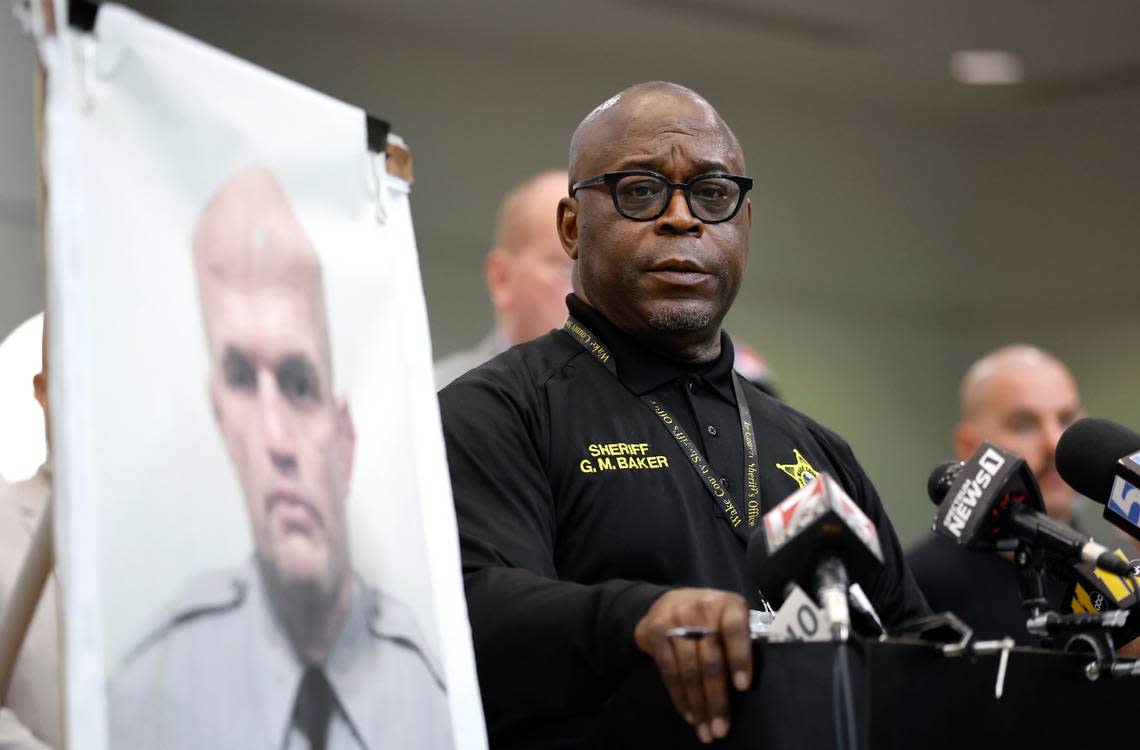 A group of Wake County residents want Sheriff Gerald Baker to leave before December, when he is already expected to leave after losing his reelection bid.

A petition filed Monday in Wake County Superior Court accuses Baker of corruption and unethical conduct and calls for a hearing to remove him.

The complaint, obtained by The News & Observer, follows public controversy over the sheriff’s actions following the death of Deputy Ned Byrd, a K-9 officer who was shot and killed while on duty in August.

The petitioners cite Baker’s alleged retaliatory transfers of several K-9 officers, which were widely seen as demotions, according to WRAL, which was the first to report the petition. The petition also contains allegations of layoffs, promotions, demotions and inaction.

Baker, who was elected in 2018, lost a Democratic primary for reelection in July. He declined to comment on this petition, a spokesman for the Sheriff’s Office said.

Under a North Carolina statute, a judge can remove a sheriff or police officer from office if at least five voters request a hearing to determine whether the accused is guilty of the following actions, according to NC General Statute 128-1:

Deliberate misconduct or mismanagement in office

Intoxication, or if convicted of drunkenness

The six-page petition states that Baker has been indicted 16 times since he became sheriff, including by current and former Sheriff’s Office employees.

This includes two lawsuits filed in 2020 and 2022 by Wake County inmates alleging assault in prison.

“Our goal is ultimately to get the justice system and the proper processes going and let it run its course as it should,” said Russell Copersito, 38, one of the petitioners and a former Raleigh police officer.

Copersito told The N&O that he retired as a police officer in 2017 for medical reasons and became dissatisfied with Baker as sheriff based on conversations with people in Raleigh law enforcement.

“I don’t know Baker personally; I’m not out to get anyone,” he said. “It’s just that hearing what’s been done and reading what’s been said doesn’t sit well with me, and. as an outsider, something has to be done.”

In addition to Copersito and his wife, Jennifer, the petition was signed by Jason Vasilko, Theresa Watkins Wainwright, Therese Potter and Brandi Swope.

On an online memorial page for Byrd, Swope described himself in a comment as the husband of an officer in the Wake County Sheriff’s Office and the Apex Police Department.

Vasilko, who has not returned an email and phone call to his company, lists himself on LinkedIn as a former Wake deputy.

The petition was prepared and filed by Jeffrey Dobson, a Raleigh attorney and Republican opponent of current Wake County District Attorney Lorrin Freeman in the November election.

Copersito said Freeman had told him and others it was not worth her office’s time to investigate Baker at their request for alleged misconduct due to his impending departure.

“While I understand that there are people within the department who are hurting and who believe that a new government should be established soon, I do not believe that my involvement in a removal lawsuit against Sheriff Baker is in the interest of justice at this time. Freeman said in a Sept. 6 email to Copersito. “The electorate has heard the concerns of those within the agency and has ensured that a new government is in place.”

In response, Copersito said he was looking for Dobson because he ran into Freeman and could come up with a legal story to take action against Baker.

Dobson did not respond to a request from The News & Observer for an interview for this story.

“It doesn’t matter if he’s 80 or 90 days away from (resigning) or not. If he did wrong, he did wrong,” said Copersito. “As a Wake County voter, we have the ability to put it into action.”

Freeman, who has not returned messages from The N&O, told WRAL on Monday that she did not approve the petition, which would prevent it from moving forward.

However, Copersito said petitioners believe the statute may still allow a hearing to take place.

Byrd’s relatives have accused Baker of retaliation after he reassigned three officers working with Byrd. One of them has since been given the job of working as a detention officer at the county jail, which the Baker family believes did so to get revenge on him for allegedly ruling out Baker’s involvement in Byrd’s funeral.

“[P]Internal moves have taken place within the Wake County Sheriff’s Office and are a result of the needs of this office to serve this county,” Baker said in a statement. “In addition, reassignments are a necessary part of organizational and career development and broaden the experiences of deputies as they progress in their law enforcement careers.”