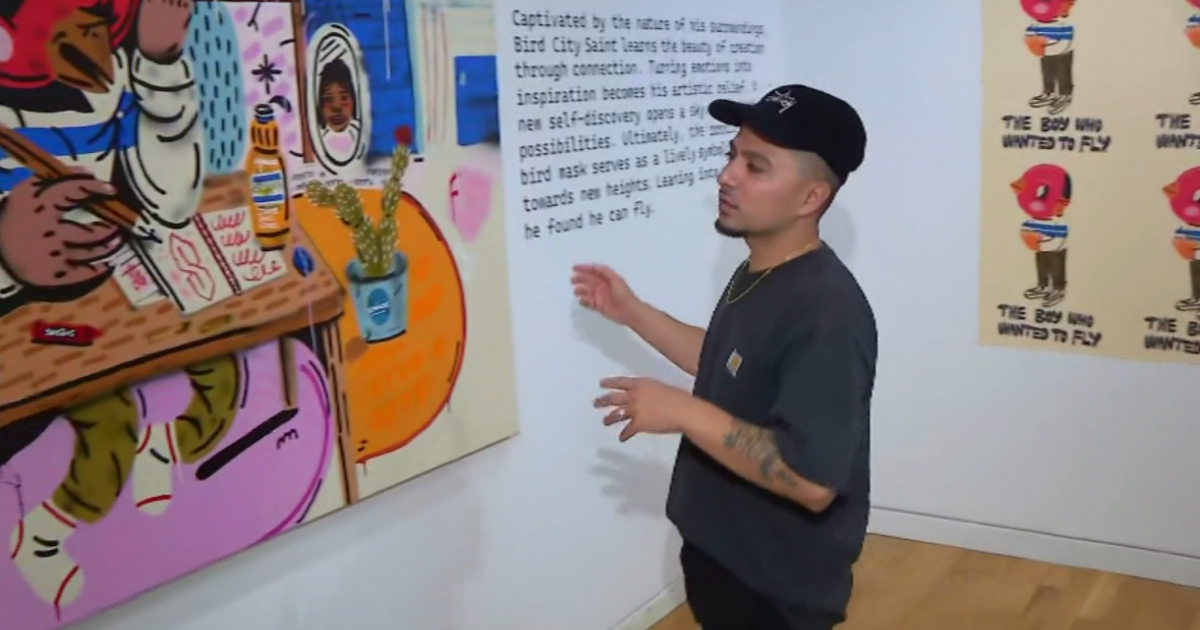 As a Mexican-American, he told us that his life symbolizes the American Dream, a dream he wants to help others achieve.

Albert Ramon of TBEN 2 caught up with him at his new exhibition at the Elmhurst Art Museum.

Joseph Perez, or Sentrock, talks a lot about “freedom.” He feels it when he creates and wants you to feel it when you see his art.

“It’s the idea of ​​someone wanting to find their freedom,” he said.

Perez showed off what he called his “signature character,” Bird City Saint, a little boy in a superhero mask. His goal is to do good.

“When this little boy, my character, puts on the bird mask, he finds his freedom, his voice, his true self,” he said.

Sentrock said he first found his true self when he first saw graffiti as a teenager.

“I’d never been to an art museum,” he said. “So to me, the museum was the graffiti that we saw out in the alleys and the old, abandoned buildings, so when I saw that, I fell in love with it.”

When he tried it himself, he got into trouble, but his mother turned things around.

“I was suspended from school for exploring my artistic voice,” Perez said. “My mother was [like,] “If this is the route you want to go, this is something you really want to do, let’s try to develop it.” So she gave me boards and cans and brushes and let me do my thing in the backyard. I think that really helped me stay on the positive path.”

That path led to street art that is building a community today. It started with murals that caught the attention of social media fans, then gallery owners and museums.

But Sentrock said it’s the authenticity, not the fame, that keeps him going.

“For me, street art is the idea of ​​giving back to the people on the street, ordinary people,” he said. “It’s just constant communication with the viewer and the artist.”

But first and foremost, Perez is a family man. TBEN 2 was with him when he let his wife Summer and 1-year-old son Santos walk around the exhibit.

“As he gets older, I hope he can look back and realize that platforms and places like this are for him,” Perez said. “I felt like this sort of thing wasn’t for me growing up…I want him to know that your voice matters and who you are.”

Sentrock also mentors young artists and helps them find their voice. Those interested can view his “The Boy Who Wanted to Fly” exhibit at the Elmhurst Art Museum through January 15.

And TBEN 2 asked Perez for his stage name. He said he was nicknamed “Sentrock” when he was a teenager after he got into trouble for spraying graffiti.

A friend told him it wasn’t a good idea to keep signing his work with his real name.