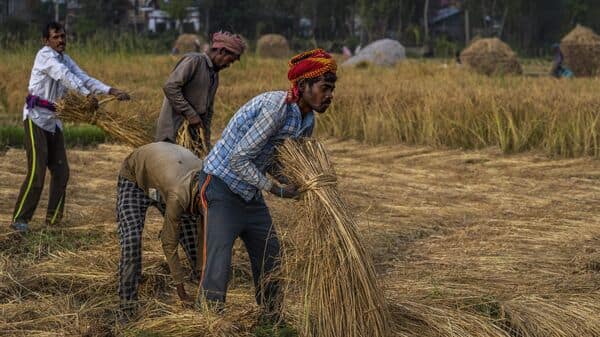 Prime Minister Narendra Modi will soon decide whether to extend a food allowance that has cost India $44 billion since the pandemic, or relieve pressure on public finances and the food supply.

Modi has been giving away 5 kilograms of wheat or rice every month since April 2020 to 800 million Indians in a program worth about 1.5 trillion rupees a year. The plan, initiated during the pandemic to supplement the long-standing sales of subsidized grain in the country, will expire at the end of September.

The Treasury Department is not in favor of extending the program as it, according to those in the know, will increase pressure on a budget deficit that is just beginning to ease from an all-time high during the pandemic. The final decision will be made by Modi’s office, which is also looking at other options, such as keeping the freebies for at least another quarter until festival season and local elections are over, the people said, asking not to be identified. while discussing private deliberations.

Modi represents an unusual situation; handing out free food to alleviate the plight of millions in one of the world’s fastest growing economies, and highlighting the government’s struggle to spread the benefits of a thriving India ravaged by high unemployment, income inequality and populist politics.

ALSO READ  'His speech was a comedy show': Tejashwi Yadav hits back at Amit Shah for calling Nitish Kumar 'underhanded'

Quitting the food program will not be an easy choice for Modi. His Bharatiya Janata party is trying to maintain power in Modi’s home state, Gujarat, along with Himachal Pradesh, where parliamentary elections are set to take place by the end of this year.

“If you stop doing this, it will definitely negatively impact people’s voting preferences,” said Sanjay Kumar, a professor at the Center for the Study of Developing Societies in New Delhi. A significant number of voters who took advantage of the free food plan voted for the ruling BJP in elections earlier this year in Uttar Pradesh, the country’s most populous state, Kumar added.

While food policy is undoubtedly very popular, it is very expensive to maintain and the need for an abundant supply of cheap grains is increasing. This year, India has had to curtail exports of wheat and rice after erratic weather damaged crops, putting pressure on food prices and driving global agricultural markets into a frenzy.

If the food settlement lasted another six months, it would cost another 700 billion rupees from the budget, people said. That could jeopardize the government’s target of further reducing the budget deficit to 6.4% of gross domestic product in the fiscal year ended March 2023, from 6.9% earlier and a record 9. 2% in the first year of the pandemic.

It’s also possible the prime minister’s office would reduce the size of the freebies given, the people said.

These are big decisions, “which the government will appeal to,” food secretary Sudhanshu Pandey said Monday. “I can’t say anything at this point.” A spokesman for the Ministry of Finance declined to comment when asked to confirm his position on the matter, while the prime minister’s office did not respond to an email asking for comment.

“Continuing this arrangement could lead to depleted food grain stocks by next year,” analysts at ICICI Securities Ltd said. led by Prasanna Ananthasubramanian. One option for the government would be to “take a leaf out of the central banks and the free food grain scheme,” they said.

The decision on the program may also affect inflation. Rice and wheat prices, which account for about 10% of India’s retail inflation, are on the rise due to lower production during a heat wave and an irregular monsoon. Price increases in the South Asian country have fluctuated above the central bank’s 6% ceiling since the beginning of the year.

When the program ends, consumers would have to buy the grains from the market, potentially pushing prices up further and posing another challenge to the central bank’s efforts to cool inflation.

“It is a huge dilemma for Modi” as he has to make the decision based on factors such as balancing the economy, setting an example to end the freebie culture in the country and electoral dividend from this scheme, said Arati Jerath, a New Delhi author and political analyst. “It’s a really hard decision for him.”