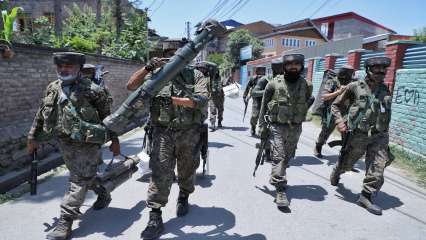 Prime Minister Narendra Modi held a review meeting on the Nagrota meeting on Friday. During this meeting, the Home Secretary, the NSA, the Minister of Foreign Affairs and a senior intelligence officer also attended the meeting. Four activists in a truck loaded with bags of rice entered the Nagrota area of ​​Jammu district early Thursday to stir up unrest in the Kashmir valley. Upon receipt of the intelligence report, the Jammu and Kashmir army and police erected a barrier near Ban Toll Square at around 5 a.m. The terrorists sought to take advantage of the darkness. A group of terrorists opened fire on security forces while checking vehicles. After that, the meeting began.

Kashmir truck registration numberDespite the state government’s ban on interstate roads, if the truck is removed from a minor station, it can also be considered a major safety fault. Due to the Corona outbreak, only Atal Setu and Lakhanpur have been opened to car traffic on the state’s interstate roads. The registration number of the truck from which the terrorists were traveling to Kashmir was from Kashmir. This license plate was also revealed to be fake. That number was Mahindra’s van. Measures have also been taken in parts of Kashmir to sabotage the terrorist network.

The operations of the army and the police were appreciated in this regard. Army chief Manoj Mukund Narwane has made it clear to terrorists in Pakistan that terrorists who attempt to infiltrate India by crossing the Line of Control (LoC) will not survive.

Shipwreck and rescue as the Vendée Globe sailing race enters the...

Shipwreck and rescue as the Vendée Globe sailing race enters the...