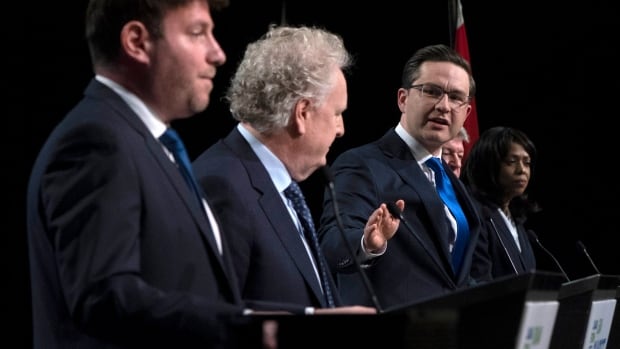 Two of the most prominent contenders for conservative leadership will not participate in the party’s final official debate.

Conservative officials have confirmed that Pierre Poilievre and Leslyn Lewis have told party officials they will not attend the August 3 debate in Ottawa.

That leaves Jean Charest, Roman Baber and Scott Aitchison to work it out for 90 minutes on Wednesday at 6pm ET.

Under party rules, both Poilievre and Lewis must now automatically pay a $50,000 fine for skipping an official debate. Both had already expressed their dissatisfaction with the decision to organize a third debate.

Poilievre senior adviser Jenni Byrne released a statement last week saying the party’s first official debate in Edmonton was “widely recognized as a disgrace” and blamed the party for its choice of moderator and format.

Byrne wrote that as the time for signing up new members is over, Poilievre will have to go “uninterrupted” to get members to fill out their ballots. She mocked Charest, saying that he needed Poilièvre’s participation in the debate to attract an audience.

Lewis, meanwhile, publicly shared a letter she sent to the Conservative leadership committee. In it, Lewis claimed that she had not received any information about the debate format and that she had told the party that she would not be available on the date set for the event.

She asked the committee whether the debate would address “the usual questions” about pipelines and budgets or instead address issues she said she hears every day from conservatives — such as calls for an inquiry into Canada’s pandemic response and concerns about the World Economic Forum.

An open letter to LEOC. pic.twitter.com/sbeBMJjRhM

The Conservative Party held an online vote asking members to assess whether a third debate was warranted. It said there was an “overwhelming consensus” in favor of the debate, which it sees as an “important opportunity” to help members decide who should lead the party.

The party started sending out graded ballots to members earlier this month and about 80,000 have already been returned, a party spokesman said.

Patrick Brown’s name appears on that ballot, despite his disqualification from officials on July 5 over what the party’s leadership committee called “serious allegations of misconduct” related to campaign finance.

Charest’s campaign used the upcoming debate as an opportunity to mock Poilievre.

In the hours before the party confirmed that the Carleton MP would not participate in the debate, Charest’s campaign released an online video captioned “It’s time to #FreePierre” — apparently a riff on Poilievre’s campaign theme of freedom.

Conservatives have until September 6 at 5pm ET to mail the envelope containing their ballots. The winner will be announced on September 10.