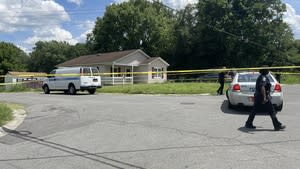 Charlotte-Mecklenburg police are investigating the death of a man in a shooting Wednesday afternoon in north Charlotte.

Authorities were called to a house on Pennsylvania Avenue, off the Brookshire Freeway, just after 1:30 p.m. Wednesday. They said the call was for a domestic violence-related assault with a deadly weapon with injuries.

Police confirmed that Rami Amin Neal, 36, was shot. He was taken to hospital, where he later died, officers said.

CMPD said investigators are not looking for any more suspects. They call the case domestic because the suspect and Neal may have been related. They didn’t say how the shooting happened, but said they weren’t sure why Neal went to the house.

“We are not free to talk about what drew the suspect to the home in the first place. We’re bringing that together,” said Dave Robinson of CMPD. “We don’t believe this is an arbitrary crime and because this is domestically related, the parties may be known to each other.”

A Channel 9 crew on the scene saw several officers putting up tape around a house at the crime scene. Several CMPD vehicles were on the scene and officers went in and out of the house.

Neighbors declined to talk to the camera, but said they knew the family who lives at the center of the investigation. They said Neal was trying to get in when he got shot.

Police would not say if anyone has been charged in the case.

Anyone with information about the shooting is asked to call 704-432-TIPS and speak to a homicide detective. Detective Condron is the lead detective assigned to the case. Information can also be left anonymously by calling Crime Stoppers at 704-334-1600 or by clicking here.

This is a story in development. come back with wsoctv.com for updates.

(Watch the video below: 5 injured, including 2 children, in West Charlotte shooting, CMPD says)