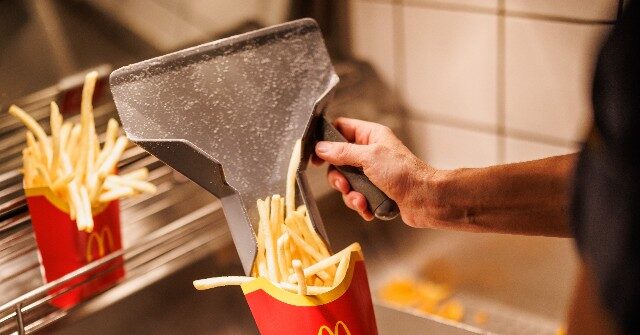 A 23-year-old Brooklyn McDonald’s employee who was shot in the neck after arguing over food has died New York Post reported on Friday.

Matthew Webb died after the incident that happened Monday outside the Bedford-Stuyvesant eatery, according to the New York City Police Department (NYPD).

Officials deemed the incident a homicide and the investigation was ongoing, the After report said:

Michael Morgan, 20, has already been charged with attempted murder and criminal possession of a loaded firearm for shooting Webb in anger at his mother being served cold chips.

He is expected to face higher murder charges, prosecutors said in a court hearing Thursday, even before Webb’s death was confirmed.

Video footage showed customers in the restaurant and a citizen expressed her feelings about what happened.

“With all the things we have to worry about right now, are they arguing over fries?” she told TBEN 7:

Webb was at work that night when the suspect’s mother, Lisa Fulmore, complained that her fries were cold.

She then asked to speak to the manager on duty, but the workers reportedly laughed. The woman was FaceTimed with Morgan, who arrived at the scene.

Morgan then got into an argument with Webb and when the couple finally stepped outside, prosecutors say the suspect punched Webb in the face and then shot him.

A picture showed the victim’s body lying on the sidewalk:

Multiple Democrat-controlled cities across the country have seen violent crime rise this year from last year, according to a June report.

Meanwhile, the suspect’s girlfriend in the recent case was also charged with gun possession after she was accused of giving the gun to Morgan.

The woman was arraigned and held on $50,000 bail after allegedly admitting to having the firearm.

“Morgan was also charged with a previous murder after confessing during questioning about the McDonald’s shooting,” police said. After report said, adding that last year he allegedly killed a man whose name was Kevin Holloman.