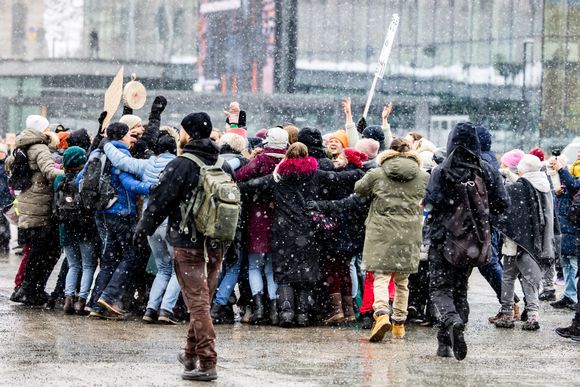 Helsinki police suspect 46 people of violating restrictions on public gatherings during a protest against coronavirus restrictions held in the capital on March 20.

At the time, police estimated that around 300 protesters were present.

The protest organizers did not follow the plan agreed with the police in advance, according to a police statement. Protesters also ignored police orders that participants should gather in groups of no more than six, instead of forming a unified group.

“Some of the 46 suspects were fined for violating the assembly restriction, while there was no reason to suspect a crime for a number of others,” the inspector said. Juha-Matti Suominen written in the press release. “Some of the cases will go through a preliminary investigation for prosecution because no consent has been obtained for the fine process or because the suspicion of a crime has been contested.”

Freedom of expression and assembly are fundamental rights protected by the police. However, officers may intervene during a demonstration if it is deemed to endanger public order and safety, obstruct traffic or is contrary to decisions taken under section 58 of the Law on communicable diseases, such as restriction of group size.

Criticism for authorizing the protest

Helsinki police have been criticized for allowing the protest to continue, especially as the Uusimaa region had the highest rate of coronavirus infections in Finland at the time of the protest.

The Regional Administrative Agency of the State of Southern Finland (Avi) had banned public demonstrations for more than six people, a ban that was to be monitored by police.

Many demonstrators were not wearing masks and did not respect safety distances. A small number of participants also tried to provoke the police officers on duty during the protest, the police added.

Organizers and police had agreed ahead of the demonstration that Helsinki’s Citizens’ Square could host a maximum of 15 separate events, each with a maximum of six participants. As more and more people arrived, the separate groups formed a much larger group.

In the end, the police allowed all the protesters to stay and the protest continued on condition that the hundreds of protesters gathered in groups of no more than six. Some participants tried to follow the instructions of the police, others did not.

“However, the organizer managed to decentralize the group a bit, so it was decided that it was better to let the protest continue until the end. Next time we will try to be better prepared.” , said the Helsinki Police Commissioner. Jarmo heinonen Yle said after the demonstration.