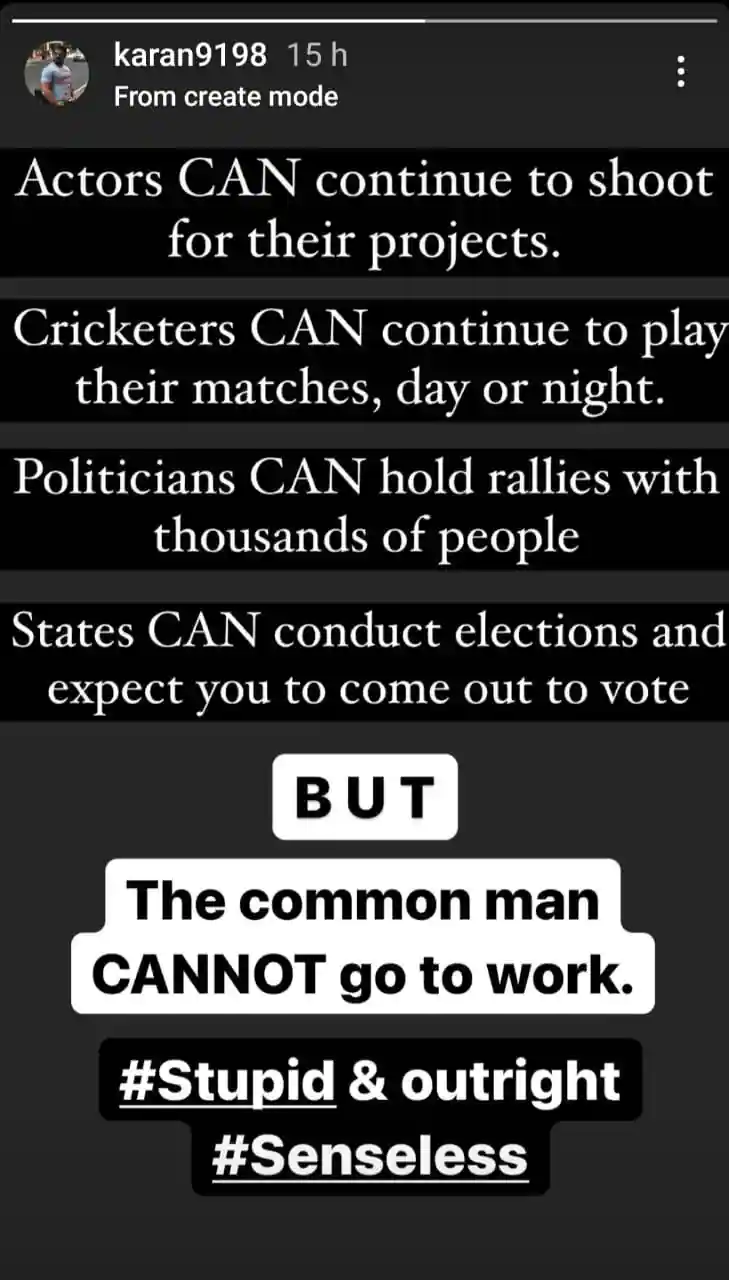 Actor Karan Patel is unhappy with the partial or minimal lockdown and restrictions that have been imposed in Maharashtra amid rising coronavirus mudslides. The actor notably shared his disgust following the political rallies which continue as usual, without following any of the COVID-19 safety rules.

Taking to his Instagram stories, Karan criticized the new rules and called them “ stupid ” and “ downright insane. ” He wrote: “Actors CAN keep shooting for their projects. Cricketers CAN keep playing their matches, day or night. Politicians CAN organize rallies with thousands of people. States CAN hold elections. and expect you to come vote. BUT common man can’t go to work. # Stupid and downright insane. “

For those uninformed, Maharashtra faces a partial lockdown, with the nighttime curfew and weekend lockdown imposed earlier this week by the state government. The restrictions will remain in effect until April 30.

Retailers, traders and a few other sectors have protested the partial lockdown and the government is likely to change its standard operating procedures (SOPs). Maharashtra Chief Minister Uddhav Thackeray also held a meeting with them and hinted at the relaxations.

ALSO READ  'Life is meant to be lived, not caged and masked for a year': Pooja Bedi's latest video screams in privilege

“The restrictions imposed are imposed by coercion in the middle of the second wave. Not only traders and businesses, but even the state is also facing losses to the treasury. We will certainly reconsider the decision and offer some relaxation. after due deliberation with the working group, the police administration and other departments, ”said the CM.

On the other hand, JD Majethia, the chairman of the Indian Film and Television Producers Council (IFTPC) said he agreed with the government’s decision.

JD said: “The filming of the TV shows, the daily soap operas will not take place on Saturdays and Sundays due to the complete lockdown. In accordance with the state government standard, the production house has been notified and they started working on their scripts accordingly. They will. manage for this week and most people will have an episode bank. From next week we will have to see how things go. We have to. looking at the big picture, we were about to enter another phase of lockdown, but that hasn’t happened. ”